Home › Review It - Rate It › Captivating Breadwinner a Story of Hope, Perseverance 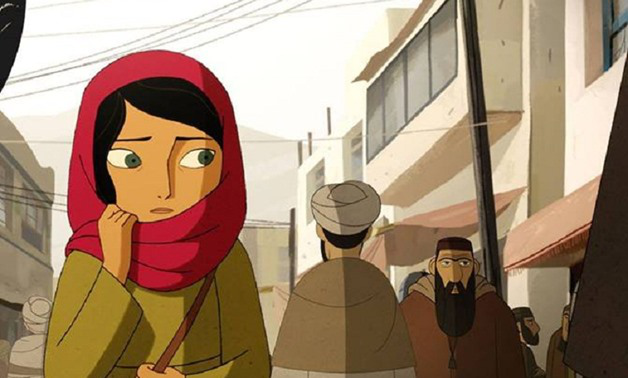 In 2017, Cartoon Saloon released the stunning Breadwinner, a story about a young girl trying to survive in Taliban-ruled Kabul, Afghanistan.

Based on the Deborah Ellis book of the same name, the Nora Twomey (The Secret of Kells) directed film—which is produced by Angelina Jolie and Mimi Polk Gitlin—follows 12-year-old Parvana as she navigates her world after her father, Nurullah, is arrested for allegedly insulting Taliban member, Idrees. Parvana is as resourceful as she is clever thanks to her father’s teaching and her mother’s creativity prior to the Taliban takeover. After the Taliban ruled that women cannot be outside without being completely covered or without a male escort, and after her mother gets beaten, Parvana, with the help of her sister Soraya, chops off her hair to become a boy named “Aatish” to work and make money for her family and to hopefully get her father out of prison.

While some consider The Breadwinner as a new-age Mulan, the story is much more mature due to its true-life scenarios that many Afghanis experience in their war-and-Taliban-torn country. The movie has stronger implications and meaning given its backdrop and how the events still currently unfold in the country. Whereas Mulan is a fictionalized and Disneyatized tale, The Breadwinner (while the story is fiction) is a story about the realities of small-scale terrorism that inflicts a nation.

Featuring stunning animation and storytelling, The Breadwinner is a rare film that is appropriate for adults and children. The harrowing details accounting the horrors the Taliban inflicts on its citizens are tastefully addressed. For adults, the content plays on awareness of the situation and the brutality that exists, especially toward women and children. However, for children, the actual violence is not shown, but the adults know what occurs based on sound and shadow-play.

As Parvana’s story plays out, she also tells her young brother a story about their past and what happened to their older brother, but it’s done in a way to where she creates a fairytale. The viewer does not know it’s about her brother at first, but key details reveal this is the case. There is a double-layer of tragedy in the story as we learn about her older brother’s death, but there is the added travesty of wasted talent. Parvana has storytelling skills, but she cannot market those skills due to her gender. Here, the viewer experiences what it’s like to live in the underground world of femaleness in a male-dominated, terror-riddled society. What other skills and talents lie beneath? This is how the movie makes the viewer think.

With thinking in mind, this is a film for those who enjoy critical analysis, so it would serve as a great teaching tool in the classroom. For example, each character’s name has meaning, and it’s interesting to see how the characters live up to their names. For instance, Parvana means “butterfly,” and the viewer sees the lead character transition from a young girl (a caterpillar, so to speak) to a powerful young woman with bravery and strength (the butterfly). Her boy name, Aatish, means “fire” (explained in the film). The meaning of Aatish shines through Parvana’s will and fiery personality as she stands up to the Taliban, takes on different jobs to support her family, and even fights for the right to see her father.

In addition to the character names, viewers should pay attention to how colors play a role in the film. Red and green are especially prominent.

Despite Breadwinner’s overall dark tone, there is an overall sense of hope. The viewer sees the creativity and craftiness it takes to try to overcome evil, and there are times where the feminist voice rings louder than the bombs that explode across the landscape. Besides Soraya’s tale, the viewer also experiences her mother’s anguish over the loss of her son and her husband and how she and Soraya find their voices to fight against an arranged marriage originally thought to be a way out of danger. There are many slices to the loaf of bread the Breadwinner brings to the table, and it’s interesting to see how each slice enhances the entire meal.

The Breadwinner was critically acclaimed for a reason, and it’s worth viewing due to many facets that make the film shine. It is viewer-friendly for all audiences, which is a positive, especially if the film is used as a teaching tool. The Breadwinner earns a 5/5.

The Breadwinner is available on Netflix.