On August 14, 2018, female rookie group, (G)I-dle released their second single, “Hann” (Alone). When the Cube Entertainment group debuted May 2, 2018 with the I Am EP and lead single “Latata,” (G)I-dle—made up of members Miyeon, Minnie, Soojin, Soyeon, Yuqi, and Shuhua—made plenty of headlines due to their catchy hit and three combined music show wins on Mcountdown and The Show. Their quick rise seemed like a fluke at first, but with “Hann,” the girls show they may be part of the new group of idol groups set to make their place in history.

Co-written by Soyeon and Yummy Tone (Big Sancho), “Hann” shows that (G)I-dle are not only good at overall performance, but behind the scenes as well. Story-wise, “Hann” is about moving past a bad relationship and trying to forget the former lover. While the title is written with two Ns, it does play on the word han which refers to feeling helpless or oppressed. The title lends to the feeling that the now-ended relationship held the speaking-partner back and prevented his/her growth. With play on the meaning of helplessness and oppression, it can be assumed that some emotional abuse may have occurred. Within the MV, this is shown via the black outfits (referring to the bad memories) and the brightly colored outfits (freedom from the partnership).

“Hann” features strong vocals and melody that make the track a memorable standout, especially in a K-Pop year that’s failed to provide overall memorable hits. The single begins with a haunting whistle that immediately draws in the audience. “Hann” has many layers to the track that make it stand out because it is haunting while maintaining the brightness of a dance track due to its string and percussion composition. The rap portions, although seemingly and purposefully flat, do well to make the song hard-hitting, and the line of “do you remember, remember what you said” adds some grit. The way the track moves from expressionless rap to some cheery, brighter notes only serves as a strong enhancement to help create the contrasts from bad memories to a more hopeful outlook.

Interestingly, the chorus is simultaneously the track’s strong and weak point. Strength-wise, the “woo-hoo-hoo” portions echo the whistling that appears at the beginning and end of the track, which is a brilliant move to tie all portions of the song together. At the same time, the “woo-hoo-hoo” portion also feels lazy as if there wasn’t enough material to create a solid, lyrically-sound chorus. The chorus felt like there could have been more added to it at times, but the cliched phrase of “less is more” also feels accurate. “Hann” is an oddity in which the chorus is both a letdown and a triumph. 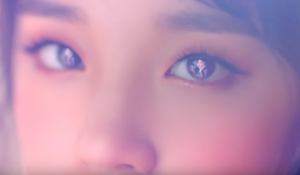 The visually stunning MV is artistic, simplistic, and complex at the same time. On the surface, the MV is like any other typical K-Pop MV featuring the artists posing and lying around before breaking into a dance sequence. Of course, there are the atmospheric scenery-shots of the desert and the girls’ performance space. However, some of the complexities come with the cinematic choices such as the members appearing in each other’s eyes or the zoom-in sequence where each girl is in a different pose on TV screens. These instances add interest to an otherwise typical MV that focuses on appearance, dress, and colorful scenery.

“Hann” solidifies (G)I-dle as a powerful rookie force and should help place the group in the running for any Rookie-of-the-Year awards at the end of the year. “Hann” is also stronger than “Latata” in terms of performance and arrangement. Check out “Hann” below and let us know what you think!