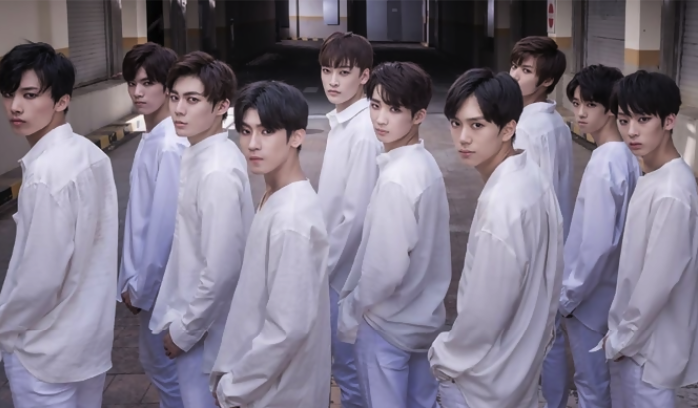 TS Entertainment finally released a statement regarding Taeseon and Wooyeop’s abuse claims. Instead of directly addressing the allegations, TS Entertainment opted to blame Wooyeop and his brief relationship with a TS Entertainment employee for why TRCNG have struggled to have comebacks.

In addition to their own denials, TS Entertainment also recruited the parents of the eight remaining TRCNG members to speak out against Taeseon and Wooyeop.

“Everything that the two members are claiming is a lie. The remaining eight members are currently active in Japan without the two of them. There is a reason for all of that,” TS Entertainment said. “It’s because Wooyeop was dating the agency’s female stylist ‘B’ which made activities difficult. After Wooyeop and ‘B’ were in a relationship, he would always miss choreography practice and go out at night to have fun, so the comeback had to be postponed.”

On November 21, 2019, TS Entertainment also produced a handwritten note that is allegedly from the parents of the eight remaining TRCNG members.

Hello, we are the parents of TRCNG. Firstly, we wish to apologize to the fans who love TRCNG and express our gratitude for your constant support.

We, the parents of the eight members, have stayed in continued communication with the agency, and we have come to the agreement to trust and rely on each other in relation to the members’ activities and work hard for TRCNG’s successful activities. Also, we plan to take active legal action against untrue information and false claims that have been previously made. It is unfortunate that rumors that are different from the truth are being spoken about.

We will work even harder with the agency for TRCNG’s successful activities. Please give your continued support. 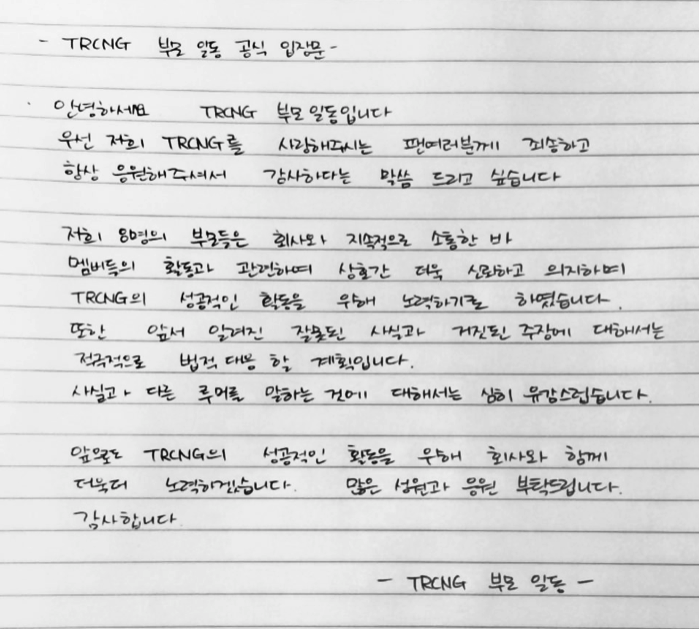 Meanwhile, Wooyeop’s mother has stood beside Taeseon and her son and claims she has evidence to prove their allegations factual.

“It’s true that Wooyeop dated ‘B’ for about two weeks,” Wooyeop’s mother said about TS’ dating claims. “However, it is immensely incorrect to put all of the responsibility for this situation on Wooyeop’s issue with a woman. The reason for the delay of TRCNG’s comeback was TS’s financial difficulties, as you can see through the previous issues with Sleepy’s power and water being cut off.”

“It’s a clear fact that Wooyeop was assaulted by choreography director Yoon,” Wooyeop’s mother said. “However, he has never once received an apology about it.”

Regarding the message from the TRCNG parents, Wooyeop’s mother said, “The members’ parents have all agreed that they should leave the agency, and we sent a notice [to TS] on October 19. We have a collection of signatures of all the parents showing that we agree they should leave the company.”

Wooyeop’s mother also pointed out that her son has been receiving psychiatric help. She also discussed how representatives from TS Entertainment even questioned medical staff regarding the chair incident while her son was in the hospital. She claims staff kept asking if Wooyeop’s injuries were really from a chair.

On November 20, 2019, Dispatch printed photos from TRCNG’s dorm showing damages and issues within the building. Conversations between Taeseon and Wooyeop, the TRCNG parents, and TS staff have also been shared. Koreaboo translated the messages on their site.