Top 5 places to visit while in China

As a country with over 5000 years of history, China has always been a mysterious existence for the rest of the world, the flying Kong Fu, the Chinese food, the culture and the old architecture has attracted millions and millions of tourists every year. Here I am going to recommend you the top 5 places to visit while in China, to discover the beauty in the biggest eastern country.

No.5 Shanghai – an oriental pearl in the east 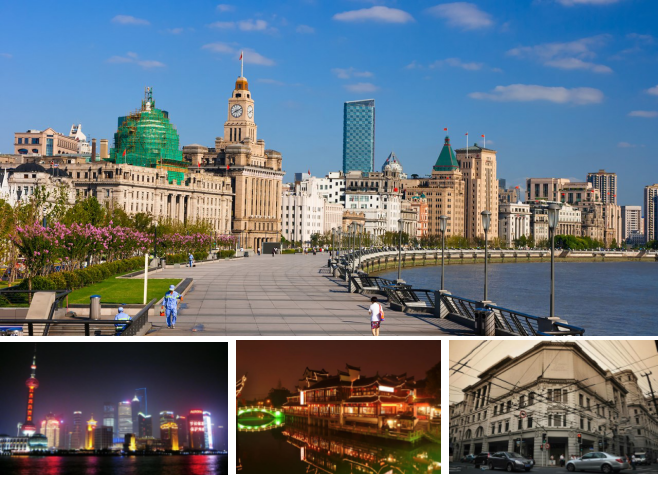 Shanghai is a very modern international city with a lot of Chinese traditional culture. For hundreds of years, it has been the center of Chinese economy, transportation, technology, industry, trade, exhibition and shipping. As a national famous historical and cultural city, Shanghai hosts many world famous landmarks. From the Yu Garden and the many ancient streets, passing by the French concession, to the new Disneyland, Shanghai brings you from the most traditional Chinese spirit to the most modern and opened entertainment.

Because of its phenomenal western style architecture, Shanghai is also called “the Eastern Paris”. Walking down the Bund, you can explore a group of 52 buildings inspired by influences coming from the old occidental world. The Bund, this architectural jewel nowadays, used to be a track road where boatman and hard labors were once working on. On the other side of the Huangpu River, facing the Bund, the scenery offers a complete different experience made of modernity: the Oriental Pearl TV Tower, alongside with the Jin Mao Tower, and the brand new Shanghai Tower…gifts its tourist with one of the most magnificent skylines.

Shanghai becomes a destination for fashion, a shopping paradise and a connection with the world. With the successful World Expo in 2010, the foundation of the free trade zone in 2013, Shanghai is walking toward the world with the “Chinese dream”.

No.4 Jiuzhaigou – a jade pool in men’s world 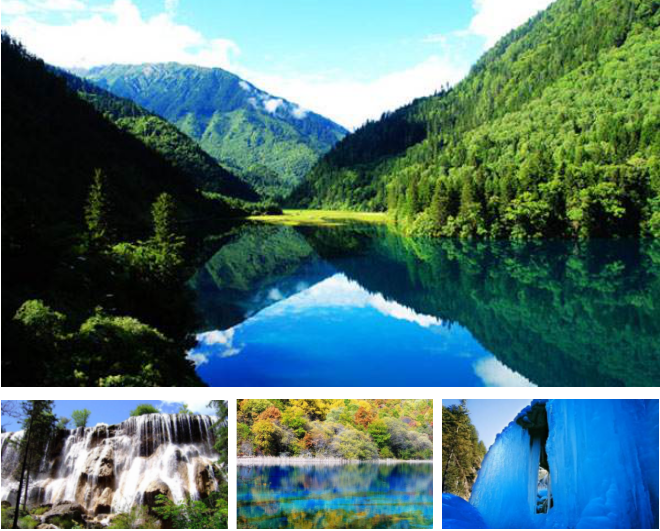 Jiuzhaigou is a national park, located in Sichuan province, which gained the prestigious title of UNESCO World Heritage Site. Wild panda and golden monkeys are among these very rare animals that you can spot in this natural ecological environment.

Jiuzhaigou, in mandarin, means “the nine villages in the valley”. According to the legend, nine smart, brave and beautiful daughters of a powerful god, decided to help the locals by defeating the Snake Demon poisoning the villagers’ water. As they succeeded in their quest, they married nine local men and built families. Generation after generation, nine tribes mute into nine villages, renamed “Jiuzhaigou”.

“When you return from the nine villages, you don’t look at water the same way.” Water in every form is a major attraction in Jiuzhaigou. You can find 108 springs, waterfalls, rivers and rapids, building colorful jade pools. There are six famous scenes: Changhai, Jianyan, Nuorilang, Shuzheng, Zharu, Heihai, which are distributed in a “Y” shape. The jade green sea, cascading waterfalls, colorful woods, snowy mountains, cultural feeling of Zang minority and blue ice are the six extraordinary beauties. The best season to enjoy this wonder at its fullest is during autumn when the landscape covers itself with the gold color coming from the trees. Reflected by the water combined with the mountains on the background, this will be a second to none experience.

No.3 Yunnan – the cradle of the minor nationalities 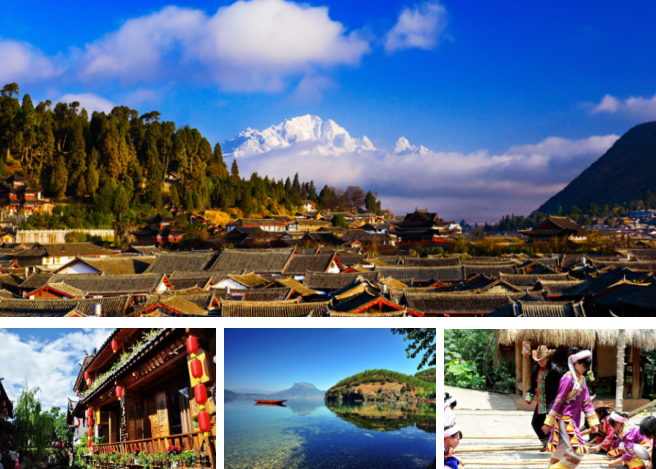 Yunnan, province in southwest China, could be translated as “south of the colorful clouds”. It is one of the provinces with the most tourism resources in China. There are three UNESCO World Heritage Sites, twelve national parks and tens of other famous tourist attractions. Out of 56 minor nationalities in China, there are 52 in Yunnan, 26 of them are long-dwelling nationalities, which accounts for one-third of the whole population in Yunnan.

As one of the two old towns which are UNESCO World Heritage Sites in China. Old town of Lijiang was built near hills and beside streams. Numerous two-storeyed, tile-roofed, timber-framed houses combining elements of Han and Zang architecture and decoration in the arched gateways, screen walls, courtyards and carved roof beams are representative of the Naxi culture and are disposed in rows following the contours of the mountainside. Old town of Lijiang is a place where you forget time. It can be a peaceful home of small bridges and rivers, a busy ancient street or a city of beautiful romance.

Beside Lijiang, Tiger Leaping Gorge in Northwest Yunnan is a place for adventures, the majestic and precipitous Yulong Snow Mount, Haba Snow Mount, Meili Snow Mount have attracted worldwide mountain explorers. The city Xishuangbanna in Southwest Yunnan is as gentle as water, it absorbed the elegance of the Dai girls. Jianshui in Southeast Yunnan has built the meaning of culture into the cornices and brackets of the old town…When you walk into Yunnan, you walk into the Naxi Dongba culture, the Dali Baizu culture, the Dai Beiye culture, the Yi Beima culture…you walk into a local custom where myths, musicals, paintings and ancient music all come together.

No.2 Tibet – a holy land where you dream to be 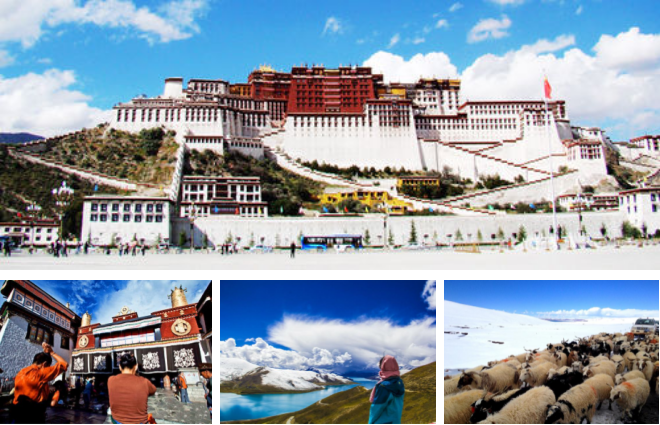 Tibet, with an average height over 4000 meters, is a pure pearl on the biggest and highest plateau in the world. 90% of the population in Tibet are Zang people. Tibet is famous for its best snowy scenery and unique plateau culture. Tibetan Buddhism has turned this place into a mysterious existence.

The Potala Palace, in most people’s eyes, is the symbol of Tibet. It contains over 1000 rooms with the White Palace, Red Quarters and their ancillary buildings. It’s a museum for the art of ancient Chinese architecture and Buddhism. The beauty and originality of the architecture of these three sites, their rich ornamentation and harmonious integration in a striking landscape, add to their historic and religious interest.

As the development of tourism, Tibet has formed into four tourism areas with different specialties. Lhasa area includes Lhasa, Yangbajing, Damxung, Jiangzi, Shigatse, Yangdork lake, the local temples are the highlights there. Western Tibet area is the roof of the world, all the believers would bring their pure heart and sincere respect to come to see the beauty of the holy mountains and lakes. Southwest Tibet has the world’s highest peak, Mount Everest, which is covered by snow all year round. And the Southern Tibet is centered by Nyingchi, where there’s amazing sites and the weather is always comfortable.

No.1 Beijing – a golden treasure in Chinese history 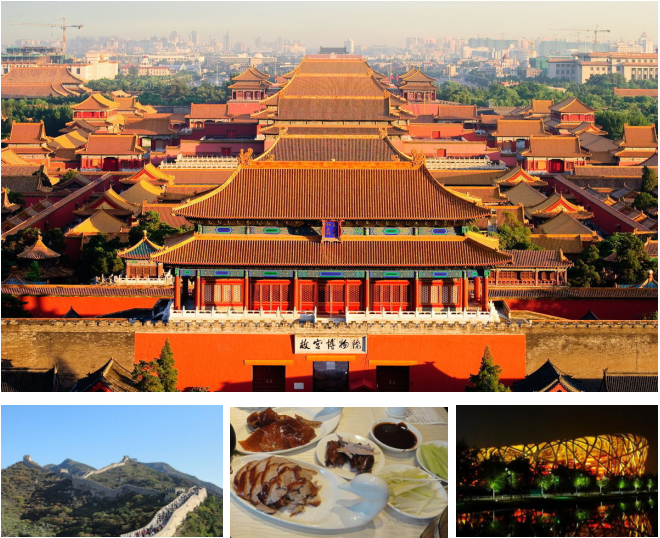 If there is only one place that you can visit in China, Beijing is definitely the must-see. As a city with over 3,000 years of history, capital of six dynasties, it has seven UNESCO World Heritage Sites, which ranks first in the world.

There are over 200 sights, 7,309 cultural objects, 144 museums/galleries and 20 national parks. Among the best known sites, the Forbidden City, with its landscaped gardens and many buildings (whose nearly 10,000 rooms contain furniture and works of art), constitutes a priceless testimony to Chinese civilization during the Ming and Qing dynasties. The Great Wall, with a total length of 8851.8km in Ming Dynasty, is believed to be the only work built by human hands on this planet that can be seen from the moon. There’s a famous Chinese saying: “If you have never been to the Great Wall, you are not a real man.”

Other well-known sites includes: Tiananmen, center of Beijing; Temple of Heaven, representation of heaven and earth; Ming Tombs, biggest imperial mausoleum for 13 kings; Summer Palace, Beihai, masterpieces of Chinese gardening art. Under the modern atmosphere of the city, the real spirit of Beijing is deeply pure and nostalgic.

In Beijing, there are many local customs and traditions which you can’t miss: the Beijing Opera, Cross talk, Cloisonn, Grasshopper competition, Sugar blowing, Dough figures…Don’t forget to go to the restaurant, Quanjude, and enjoy a nice Beijing Duck!