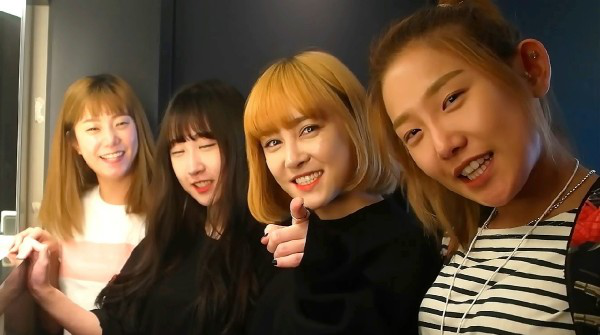 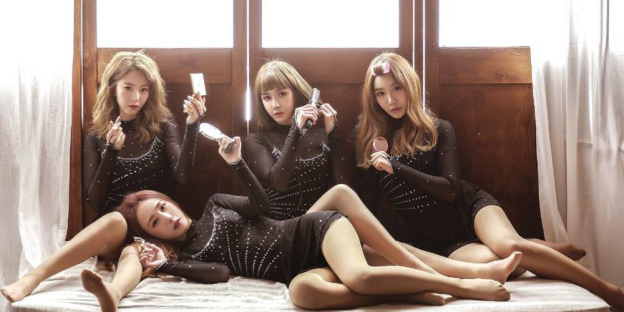 If you’re a nugu girl group, what would you do to try to gain relevance in a cutthroat K-Pop industry? Naturally, many would “train harder” or “release better music” or “come out with better concepts to get noticed.” If you’re Six Bomb, a group that debuted in 2012 with “Chiki Chiki Bomb,” you’ll do the latter.

Six Bomb returned to the K-Pop scene in 2016 with the panned viral song “Wait 10 Years, Baby,” the track that only went viral thanks to their gimmicky, raw chicken-colored body suits. Internationally, the MV solidified stereotypes that anything that comes from Asia is quirky or weird. The gimmick worked as the group is still around and they earned some international attention. Fast-forward to 2017 and the group, which now consists of leader/rapper Soa, vocalists Dain and SeulBi, and rapper Gabin, released two songs: “Becoming Prettier Before” and “Becoming Prettier After” which have, once again, generated international buzz.

In “Becoming Prettier Before,” viewers are treated to a song with a split-personality as the beat and tempo change jarringly. The MV, however, caused people to notice as it documents the girls getting consultations at a plastic surgery center and practicing in the studio before wrapping up with the girls getting gussied up in makeup for a photoshoot.

As the video unfolds, it could be interpreted two ways: The girls are literally going to have plastic surgery, or—based on the ending—they decided to love themselves enough to not go through with it. The lyrics for the track also hint that the interpretation could go either way with the song mentioning that the girl got her hair and nails done and bought new clothes following a breakup. The plastic surgery-angle isn’t hinted at strongly, but this could be due to overall poor-lyric writing.

Unfortunately, with the follow-up MV, “Becoming Prettier After,” the former interpretation of “going under the knife” became true. The second MV shows the girls with their new looks—which are estimated to have cost around $100 thousand USD—and practicing for their comeback while wrapped in bandages.

For the “Becoming Prettier After” comeback, the girls returned with enhanced busts, double-eyelid surgery, and some refinements to their jaws and noses. The transformations are not too dramatic, but they are noticeable, especially for Dain whose eyes appear too Westernized post-op. The return has polarized fans and casual observers with some praising the girls’ dedication to a concept while others felt disgust the company made them undergo the changes, especially in light of Soa saying during a BBC interview that she had to think hard about changing her looks because she “really liked and was satisfied with [her] previous eyes.”

While the “Becoming Prettier” plastic surgery concept isn’t too shocking due to many K-Pop idols undergoing some sort of plastic surgery and with South Korea being one of the leaders in plastic surgery, it is shocking as Six Bomb are one of the few groups to openly detail their plastic surgery in a music video (Brown Eyed Girls once parodied Lady Gaga’s “Poker Face” with the SNL Korea skit “Plastic Face” where they poked fun at their own procedures). This is where the problem lies as the video showcases everything that’s wrong in society and in the Korean entertainment industry which mostly targets young people.

Today, many societies try to promote self-love and acceptance regardless of appearance and body-type. However, all the images we see of perfectly coifed and sculpted celebrities tell people the opposite: A certain look is required to be successful. In Korea, this is the message sent daily with plastic surgery tours made available to foreigners, plastic surgery ads on the streets, and certain appearances being peddled in advertisements as perfect and acceptable. Double-eyelid surgery is one of the most common procedures in South Korea and is often gifted to young people. For many, plastic surgery equals potential success. 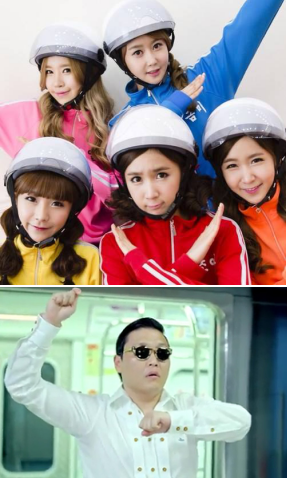 For Six Bomb, the plastic surgery concept must have been synonymous with success, especially from a company standpoint. To a degree, they gained some notice in Korea and plenty of international coverage; but long-term, it’s a gimmick that won’t help the girls be successful in the K-Pop industry. With poorly written songs, low-quality music videos, subpar vocals, and badly arranged songs, the group still risks slipping off into obscurity much like they did after their debut. Unless the group wants to be pigeon-holed into weird and outrageous concepts much like Crayon Pop did following their viral hit “Bar Bar Bar,”  there isn’t an upward movement for Six Bomb because their company doesn’t promote them well or give them the material they need to truly be successful. The money spent for the plastic surgery—a possible one-time gimmick—could have gone into better videos, vocal training, and music to help the group try to gain some ground.

The truth is this: Gimmicks only go so far and grow old quickly. In the case of Crayon Pop, 2013 was their year with “Bar Bar Bar.” Helmets became a trend and non-Kpop fans recognized the song and piston dance. Following “Bar Bar Bar,” it’s viral success, and even some of the music show wins, Crayon Pop failed to stay relevant because their company tried to continue the gimmicks over promoting their obvious talents and strong vocals.

Even PSY, who was and is still immensely popular in Korea, faced a similar gimmick dilemma following 2012’s “Gangnam Style.” Internationally, PSY went from a hero with a cult following to someone to be mocked thanks to subsequent “try-hard” songs like “Hangover” and “Gentleman” which, while racking up YouTube views, were panned more than praised. This is not to say that PSY lost popularity in his native country, but it is pointing out how trying to duplicate the success of a song and MV that grew larger-than-life can prove problematic. In PSY’s case, he wasn’t hurt in Korea, but internationally, his act grew tired.

In Six Bomb’s case, the attention received for the “Becoming Prettier” tracks will more than likely be short-lived. Because of this, instead of spending thousands trying to enhance their looks for a one-time concept, their company could have stepped outside the box of what’s expected for Korean females (plastic surgery) and promoted self-love and natural beauty. They could have sent a message to girls that they are fine as they are and they don’t need to change to be accepted, which is what was hinted at in “Becoming Prettier Before” when the girls had their makeup done. There isn’t anything makeup can’t do these days, so going “under the knife” was wholly unnecessary. This was a chance for the group to set a principle and be empowering, but they failed to do so.

The concept was done for all the wrong reasons and further the message that one’s natural looks are not good enough. Six Bomb and their company passed on a golden opportunity to send a different message: You’re beautiful as you are. Instead, the shallowness of beauty standards and faux-perfection in the entertainment industry are further enforced, but the imagery and message will not help Six Bomb succeed in the long run.