The Legend of Zelda: Breath of the Wild Lives Up to Hype

The Legend of Zelda: Breath of the Wild Lives Up to Hype

On March 3, 2017, Nintendo released The Legend of Zelda: Breath of the Wild (BotW) for the Nintendo Switch and Wii U. Months prior, Nintendo hyped and teased the game in spectacular fashion, appeasing the appetite of gamers and longtime Zelda fans alike. Nintendo delivered as the game is as beautiful as promised with enhanced game play, an expansive world setting, and nice features that bring BotW to life. 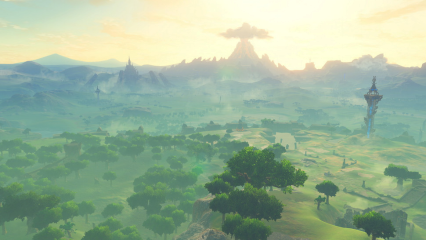 For starters, Nintendo created a beautiful, expansive land that is absolutely breathtaking. The rich, lush landscapes are lively and teeming with activity from the different wildlife to the monsters that hideout throughout Hyrule. It’s easy to get lost in the landscapes because there is so much to see. Grass blows in the breeze; animals hide in the woods and wander about; trees waver in the wind; mountains are slick when it rains; each landscape has extreme temperature changes. The waterscapes, too, have realism with their ripples and light play.

There is a lot happening in BotW, so players can expect to be entertained for long periods of time. Besides the main quest—defeat Calamity Ganon—there are several shrines, puzzles, and side quests to do that will make the game last a while. Players can do these quests in any order, and there’s an active quest list in the menu that helps players keep track of side quests they’ve completed or yet to complete. For the shrines, the puzzles really do keep a player on his or her toes as many do require thought and planning. The game will make you work for its various perks like spirit orbs and enhanced weapons, but it is worth it.

The game is more realistic in that weapons break [a lot]. Unlike other Zelda games where you have the same weapons throughout, there are a ton of weapon upgrades available within BotW, but weapons tend to break during the worst moments, especially early on. This is a mix pro and con because it’s horrible mid-battle when a weapon decides a shatter, putting the player at a disadvantage until weapons are swapped out. However, it makes for an interesting dynamic when the player has a mix of weak and strong weapons.

One of my favorite elements of BotW is the shrine quests. Some of the shrines involve critical thinking skills to solve them, so it’s nice that BotW isn’t just a mindless action game. There are puzzles within the shrines that are fairly easy to do, but there are others that are downright frustrating. Without revealing any of the shrine names, some of the more frustrating shrines involve tilting the Wii U controller and trying to aim it perfectly to get balls to move about accurately. Prepare for some swear-fests because they are unavoidable.

For this game, Nintendo also gives players credit for being able to craft their own gameplay experience. Unlike other games on the market where “hand-holding” exists and story and play is more linear under the guise of having free-range gaming, BotW truly is free-range. Players can do quests in any order they please. Players can wander the grounds freely without issue. Gamers can do what they please to make the experience their own.

Link, although he is silent in the game, has some personality. If he’s standing around, he’ll pass time by flexing his muscles. When he’s getting upgrades from the Great Fairies, he reacts to whatever kiss they give him. Even his dialogue text is a mix of straight-forward responses and impishness to add depth to his character.

Overall, the characters including villagers, travelers, and villains have more character. Some of the dialogue has innuendo that will go over a young player’s head but will cause adults to chuckle. Some of the background characters are stars in their own rights, like Bolson who seems to be a stereotype of someone from the LGBTQ community, and Magda, who will cause harm if you step on her flowers. There are a few Easter egg characters like the travelers that look like Robin Williams and Satoru Iwata, so be on the lookout for the background characters that will definitely breathe extra life into the game. 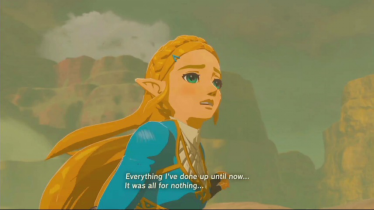 First, the game features voice acting within various cut scenes. A few characters have voices fitting for the characters. Mipha and Revali’s characters, especially, have voices that match their respective sweet and brash natures. Meanwhile Zelda comes across as a bit over-dramatic and stilted. The pitch of her voice is awkward and doesn’t match the tone or mood of the game. Her voice is just weird to listen to, so there is a slight failing here. Overall, the voice acting adds another dimension to BotW to enhance the epic feel of the game.

Some of the lesser bosses and monsters are more difficult than the main bosses. For example, a Savage Lynel takes more time and resources to beat than even the main boss, Calamity Ganon. This is a bit of a letdown because it’s expected that main bosses would be difficult. As Link gets stronger and collects more power and better weapons, the main bosses are fairly wimpy. Since the game does allow for the player to craft their own gaming experience, players can attack Ganon without all the enhanced weapons and powers if they are looking for a challenge.

For our review, we played the Wii U release of the game, so we can’t speak on behalf of Switch users. However, we’re assuming the cons may be the same for both systems as it is the same game. With that said, the cons we experience as Wii U players may not be the same for those playing on the Switch.

One of the biggest cons for BotW is a common issue for many games available on the market today: Camera angles are TERRIBLE. It is difficult to find consistent angles that enhance game play because locations and character position play a role. For climbing or enemy combat, camera angles stand between Link and death a lot of times. The controls don’t really allow for good views, and when there is a good view, it’s like the heavens open. Otherwise, the camera feature has not improved over time for Nintendo games and can lead to some issues with dizziness and motion sickness in some players. I experienced headaches and dizziness long after I stopped playing, so if you’re like me and have motion sickness or certain movements, graphics, colors, or lighting triggers migraines, exercise caution while playing due to camera issues.

Another con is that the game utilizes the entire controller. Different buttons do multiple things (for example, the right movement button is the camera, the Sheikah scope, and switches gear in the menu), so it’s easy to make a mistake during a battle or side activity when trying to switch weapons, shields, shoot arrows, or adjust camera angles. For younger players or those who are less coordinated, the controls may be a source of frustration. It does take a while to memorize the different button functions, but this becomes second-nature with time.

One issue I had during gameplay was that I experienced lag at various points. For example, battles against more than four monsters caused the game to slow down or glitch out, or battles that use up substantial graphics like Fireblight Ganon cause delays of more than five to ten seconds during gameplay. This could be due to my Wii U not having enough memory, but it is noticeable and annoying. I also noticed that the menus sometimes cause the game to flash or crackle. At times, I thought my TV was getting ready to go out, but it was just the game. I cannot confirm if this is an issue only with the Wii U or with both the Wii U and Switch.

BotW is stunning and breathtaking and, perhaps, one of the best games in the Legend of Zelda series. There’s a lot to explore, but it’s not without its pitfalls. Once the controls are figured out, game play feels more natural, but camera angles will certainly trigger motion sickness and headaches. With those issues aside, BotW will entertain for a long time and earns a solid 4/5.