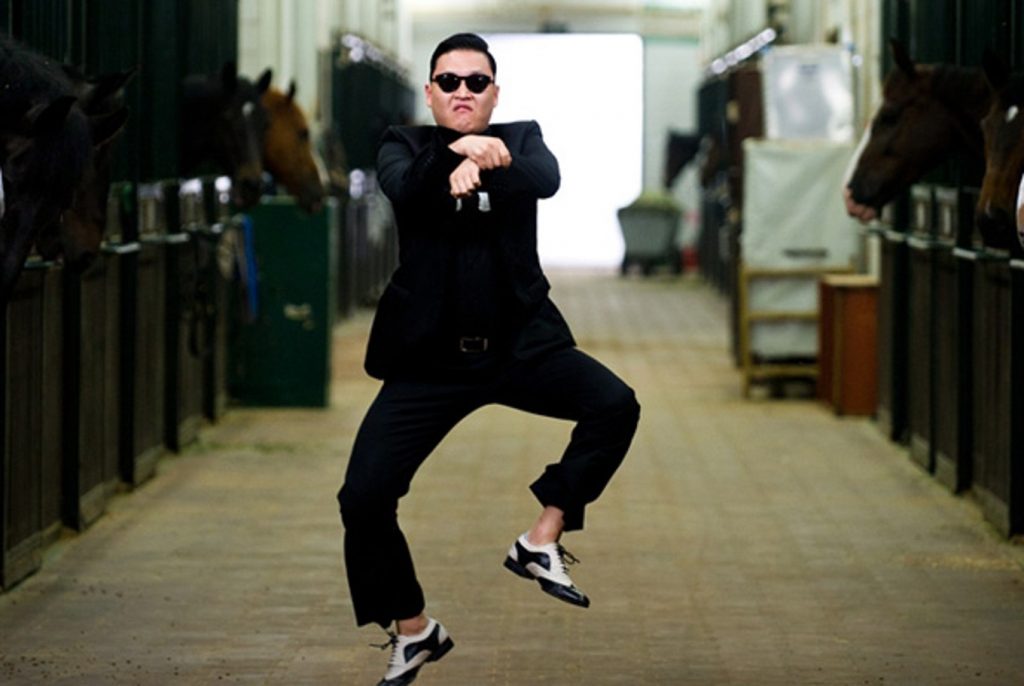 2012 was one of K-Pop’s stand out years thanks to hits from BIGBANG (“Fantastic Baby”), 2NE1 (“I Love You”), FTIsland (“Severely”), EPIK HIGH (“Don’t Hate Me”), Lee Seung-gi (“Return”), T-ara (“Lovey-Dovey”), Sistar (“Alone,” “Loving U”), and Block B (“Nillili Mambo”) among others. The year brought plenty of mainstream hits and helped the Hallyu Wave crash into more shores, especially in the United States. However, no song released at that time made the splash quite like PSY’s “Gangnam Style.”

“Industry executives, government officials, pundits, critics, fans… just assumed that the breakout star from Korea would likely be either a boy band or a girl band,” said president of the Seoul-based DFSB Kollective artist and label services agency, Bernie Cho. PSY “proved to everybody that instead of a Korean version of a Western pop star or an international pop star, what the world wanted was something very authentic, original, unique.”

Released on July 15, 2012, the smash hit was not only popular in South Korea, but it quickly climbed international charts, causing the song’s popularity to grow. Soon, “Gangnam Style” not only became a song that was both loved and loathed because of its airplay on the radio, TV shows, sports stadiums, and talk shows, but it also became an international dance craze and an award-winning track that placed K-Pop on the map as a culturally significant music genre in the West.

“It was really influential in perhaps making Korea or Korean music or Korean media more of a common element of general knowledge in lots of places… certainly in the US, but also globally,” said scholar Michelle Cho.

“I feel very proud that I had a role in being that trigger. BTS have thanked me for that part several times, so I’m proud of it,” PSY said during a press conference for his latest album, PSY 9th.

“He was always someone I was grateful for,” BTS’ Suga said in an interview in May 2022. “With ‘Gangnam Style,’ he paved the way for K-pop in the United States that we were able to follow his footsteps with ease.”

“To have played a role in paving the way for music of all kinds to transcend borders is a true honor,” said PSY.

When it was released, not even PSY could have predicted how much of a viral hit and pop culture icon “Gangnam Style” would become.

According to PSY, “Gangnam Style” was created to poke fun at the Gangnam district lifestyle.

“People who are actually from Gangnam never proclaim that they are—it’s only the posers and wannabes that put on these airs and say that they are ‘Gangnam Style’—so this song is actually poking fun at those kinds of people who are trying very hard to be something that they’re not,” PSY told CNN in 2012.

The satirical song and video are about claiming to be from Gangnam in order to impress a girl, while the video’s dance and themes are intentionally uncouth as part of the fun. Initially, “Gangnam Style” was intended for the local South Korean audience as the humor within the themes, celebrity appearances, and lyrics would be familiar to the local audience.

However, the catchy song and music video appealed to international audiences, causing PSY to become a household name.

“The YouTube video never targeted foreign countries,” PSY told Reuters in 2012. “It was for local fans. My goal in this music video was to look uncool until the end. I achieved it.”

“Gangnam Style” peaked at number two on the Billboard Hot 100 chart while carving a path in music history. In the United States, it was certified platinum five times, while Australia saw the song certified 10 times platinum.

“[PSY] broke the rules of the game. The traditional marketing and promotional playbooks were essentially thrown out the window,” said DFSB Kollective’s Bernie Cho. “[‘Gangnam Style’ showed] the importance, the impact, the influence of YouTube on pop music and pop culture worldwide.”

Since the release of “Gangnam Style,” streaming has become the music industry’s main source of revenue. In addition to changing the industry’s revenue stream, music charts have also adapted to include YouTube and other streaming services into their metrics.

“Gangnam Style” is one of those once in a generation pop culture events that will be looked upon in the years to come. Congratulations to PSY for his impact on music history!