Why your favorites might not win on music shows? 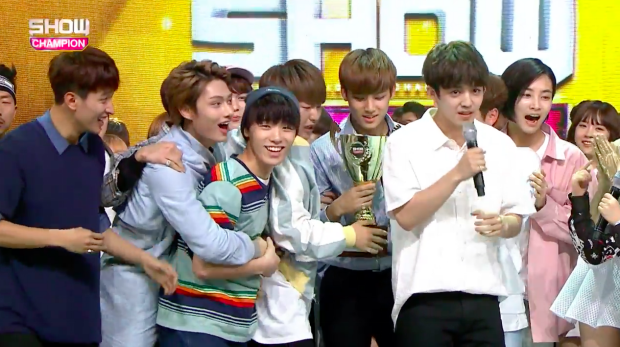 For some reason, fans have become obsessed with the idea of their favorites winning on music shows and have begun to idealize the concept. The highly sought after win for some means a group has ‘made it’ and have lowered their risk of forced disbandment. Others have pure intentions, like wanting to give their favorite group a tangible sign of their support. Either way, there are some misconceptions about the ‘winning’ process.

First off, groups are not usually eligible to win during the first week of their comeback. That means they will appear on the show, but not be up for nomination. Most shows will display the full list of groups up for nomination on their website or voting list.

Music shows all use a point system to decide the winner for the week. For example, Mcountdown’s point breakdown is as follows:

As you can see, digital music sales weigh extremely heavy in determining the group’s weekly score. Digital sales are considered the plays and downloads that the song gets on the Korea music sites, the most popular of which is Melon.  On most of these music sites, you are able to monitor what are the top 100 songs every hour.

If your group does not have enough of a following to get places on any of the music charts or the song is not well liked by the public that uses the sites, it will be extremely hard for them to win on most shows. Even more so if they cannot make up for it in the other categories.  What this means is no matter how much you insist their comeback is better, if another artist ranks higher than your favorite, that artist will win. I repeat, no matter how much you rant and rave about your group’s song being better, if another scores higher, your group will not win.

Winning is nice, but it is not everything. Supporting your group is not a bad thing, but attacking others under the guise of support is not the way to do that. International fans in particular have to accept that there is only so much you can do to help a group achieve a win. Even further, some music sites and voting are only available for Korean residents, so there is nothing you can do to help sometimes. Some groups will win extremely fast and others have not gotten a win in their entire career.  As long as they are able to continue releasing music for their fans, they are a success!

Groups like UKISS and GOT7 have toured all around the world, performing for thousands of fans before getting a win. Does that sound unsuccessful to you?

Groups’ popularity can rise and fall in an instant and a music show win does not stop a group from having problems or even disbanding. What can help is supporting your favorites in healthy ways and not spreading negativity.