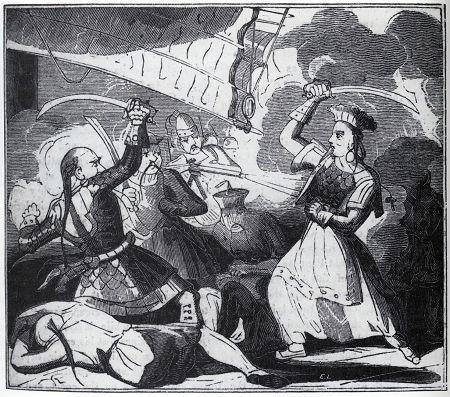 Thanks to the Pirates of the Caribbean and Captain Jack Sparrow, new generations have turned to learning about pirate lore. Beyond Blackbeard (Edward Teach, 1680-1718), Black Bart (Bartholomew Roberts, 1682-1722), and Ned Lowe (1690-1724), did you know that some of the most feared and successful pirates were women? Anne Bonny and Mary Read are two of those notable female pirates, but Ching Shih (Cheng I Sao, 1775-1844) is the most successful female pirate, if not one of the most successful pirates of all-time.

Ching, who was born as Shi Yang (also listed as Shil Xiang Gu or Shil Gang Xu), hails from Guangzhou, Guangdong province in South China. Little is known about Ching’s childhood, but it is clear that she was not from an elite family as her feet were unbound (foot-binding was practiced by China’s upper class, so women from lower classes did not partake in the cruel custom), so it is clear she was impoverished as a child. However, the one element of her life that was clear was that Ching was a former prostitute that worked on the Floating Boats of Canton (Pearl River), a floating brothel.

As a prostitute, Ching held the moniker Shih Heang Ko. While on the boats, legend states she learned trade secrets from brothel customers and that she was intelligent, beautiful, and business-minded. While on the boats, she attracted the attention of Cheng I, China’s notorious pirate who is believed to be from a crime family.

While it is clear Cheng I fancied Ching, what is not clear is how the two came to be wed. Some records indicate that Cheng I had his crew raid her brothel and kidnap her for the purpose of marriage, while others state he asked for her hand. In both instances, it is clear Ching did negotiate for her right to have power within the Red Flag Fleet as well as equal rights to what the fleet plundered. She gained this right and ruled alongside Cheng and his second-in-command, Chang Pao, who was also rumored to be Cheng’s lover in addition to being his adopted son.

Due to her business-savvy, Ching helped Cheng grow the Red Flag Fleet. Estimates show that the fleet, which was already successful with 200 ships, eventually grew to include 1700-1800 ships and 50,000-70,000 crewman on color-coded ships.

In 1807, Cheng died unexpectedly. While it is not clear how Cheng passed (some reports indicate a wave may have killed him), Ching rose to power to become the “Terror on the Sea.”

Ching’s intelligence and business savvy helped the Red Fleet grow to more than 80,000 ships during her reign.  While in power, Ching kept Chang-Pao close, later forming a romantic bond with him (they later married), and she used Cheng I’s relatives, his nephew Ching Pao-yang and his cousin’s son Ching Ch’I, to help prevent conflict on the seas. She used people’s loyalties to her late-husband to form bonds and partnerships that helped her become one of the fiercest pirates on Pacific waters.

During her reign, it is believed Ching ruled over several coastal towns “between Canton and Macau” where she placed “levies and taxes” on settlements along the shore. These settlements were often robbed of their goods by Ching’s fleets, and women and children were taken and sold into slavery.

On her ships, she was also known to rule with an iron fist. Rape and other forms of consensual and non-consensual sex were banned unless the men agreed to marry the women captives and remain faithful. If rape and sex occurred outside of these parameters, some first-time offenses resulted in severe beatings, but second-time offenses (and sometimes even first-time offenses) resulted in men being beheaded as punishment. If sex was consensual between a man and woman but marriage did not occur between the two, the man was beheaded and the woman had cannonballs tied to her and thrown into the sea. Furthermore, if pirates in her crew ran off, she would track them down and cut off their ears.

Ching’s prowess helped her fleet even defeat advances from Chinese (Qing Dynasty) government ships (a battle that took almost a month to complete, and a battle where Ching’s ships survived), and British and Portuguese bounty hunters. In 1809, she even captured Richard Glasspoole, an officer of the East India Company ship The Marquis of Ely, and seven British sailors.

In 1810, Ching retired and accepted amnesty from the Chinese government. Instead of being put to death, Ching and her crew were allowed to retire and keep their loot. Upon her retirement, Ching and Chang-Pao had a child. Ching also ran a brothel and a casino until her death at the age of 69. Beyond this, no one knows what her private life away from the seas consisted of as she lived in anonymity. However, her husband, now under the name of Cheung Po Tsai, became the leader of governmental pirate hunting fleet until his death.