The Use of Metal Chopsticks in Korea

Home › Article › The Use of Metal Chopsticks in Korea

The Use of Metal Chopsticks in Korea 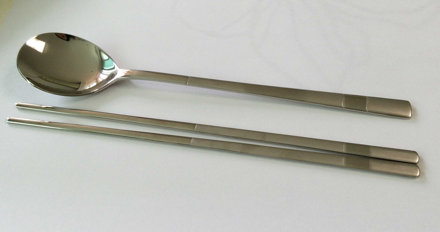 Did you know that Koreans are the only race in Asia that has a long history of using metal chopsticks?

Here, you will find out why Koreans use metal chopsticks rather than chopsticks made of bamboo or other kinds of wood like other Asian countries.

The practice of using utensils is said to go back as far as the Baekje Period (18 B.C~660 A.D) when royalty used bronze implements for their utensils. During this period, the royal family used silver chopsticks to detect poison in their food. The upper class would also use gold, silver or brass chopsticks for events. Commoners took after the king and adopted steel chopsticks.

(During the Shilla Period (668-932 A.D), the royalty used silver implements because silver was said to get rid of poison.)

Metal is a great conductor of heat and this is convenient because Korean food is mostly served hot. But this is not the only reason that explains why Korea is the only country in the world that uses metal chopsticks.

Korean chopsticks are typically made of metal and square in shape so it is easy to pick small and thin pieces of food.

In length, the Korean chopsticks are somewhere between the Japanese chopsticks and the longer chopsticks used in China. Metal is a good conductor of heat and Korean soups are usually served boiling hot.

Metal chopsticks are proven to be more hygienic than wooden chopsticks since you can sterilize them. Korean restaurants take time out to sterilize the chopsticks in boiling water and this practice is also done at their home.