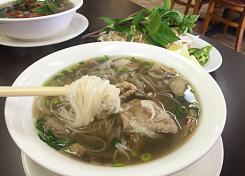 This dish needs no introduction. Pho has been the primary iconic dish that sneaks into one’s mind when it comes to Vietnamese cuisine. What kind of Vietnamese meal would it be if Pho is not mentioned? It is next to impossible to walk a block in Vietnam’s major cities without encountering a Pho stand. Pho is a simple staple, consisting of a salty broth, fresh rice noodles, and a sprinkling of herbs on top accompanying a protein of choice (most commonly chicken or beef). It is cheap, it is tasty, and it speaks to your soul. If you have not experienced this magic in a bowl, do yourself a favor and get one as soon as possible. 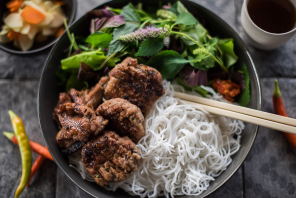 Although Pho may take the crown as the most famous dish in Vietnamese cuisine, Bun Cha would take the title of “King of Lunch” in Vietnam. If you need help identifying Bun Cha on the street, search for clouds of meaty smoke around noon time. The smoke is caused by small patties of seasoned pork and slices of marinated pork belly over a charcoal fire. Once they are grilled to perfection, the morsels are served with a bowl of fish sauce-flavored broth, and a basket of herbs with a healthy serving of rice noodles. Very often, you would find nem cua be, or fried crab spring rolls, accompanying Bun Cha. Need a little bit more convincing to get you to give it a try?  President Obama ordered this dish when he hung out with Anthony Bourdain. 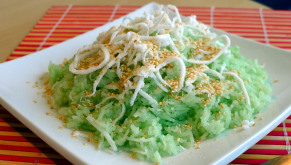 In the United States, sticky rice is often categorized as a desert. However, in Vietnam, it is more of a meal in itself. The glutinous staple comes with a variety. It can vary from protein sources, to the way it is presented. However, one common theme is that it is almost always served with scattering of dried shallots on top. Xoi is a common on-the-go breakfast item and it can be found on nearly every block of Vietnam. There are a lot of different colors to choose from. Unfortunately, the colors themselves do not influence its flavors whatsoever. For breakfast, it is most commonly served with a side of sweet sauces that are often coconut based. 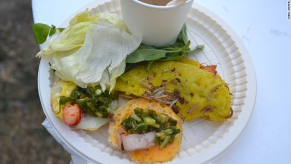 A good banh xeo is a crispy crepe bulging with pork, shrimp, and bean sprouts. Topped off with garnish of fresh herbs that is a common theme in authentic Vietnamese cuisine. To enjoy one like a local, cut it into smaller slices, roll it up in rice paper or lettuce leaves like a taco and dunk it into a sauce, which most commonly would be the fish sauce. The refreshing garnishes and lettuce perfectly negates the greasiness that comes from deep frying the crepe. It is a very common dish in Vietnam that people order as appetizers before enjoying the main course. However, Banh Xeo itself can also be viewed as a main course, giving how hearty the dish can be. 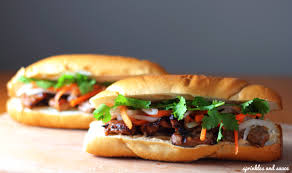 The French may have introduced Vietnam to the baguette, but Vietnam elevates the bread to further enhance its elegance. The result of the ascension is Banh Mi. Banh Mi varies depending on the region of the country you are currently in. In the north, the chefs stick to the basics of carbohydrate, fat, and protein, which means Banh Mi would be composed of bread, margarine, and paté. In the south, however, your Banh Mi may contain many more elements such as cheese, cold cuts, pickled vegetables, sausages, fried egg, fresh cilantro, and chili sauce. This sandwich is a bomb of flavors that will instantly punch you on the palate with no delay. This one-sandwich-to-rule-them-all style of a sandwich would engrave its tasteful presence to your mind and never disappear.