Quite possibly the most vibrant city in the whole of South Asia, Bangkok is a fantastic melting pot of Eastern and Western cultures. With one of the most efficient public transport systems in the world, a throbbing nightlife scene and an affordable currency, Bangkok is unlike any other city in Asia and thus remains the center of attention of every type of tourist from all over the world. We take a look at the top 5 tourist spots of this vibrant and colorful city in the list below. 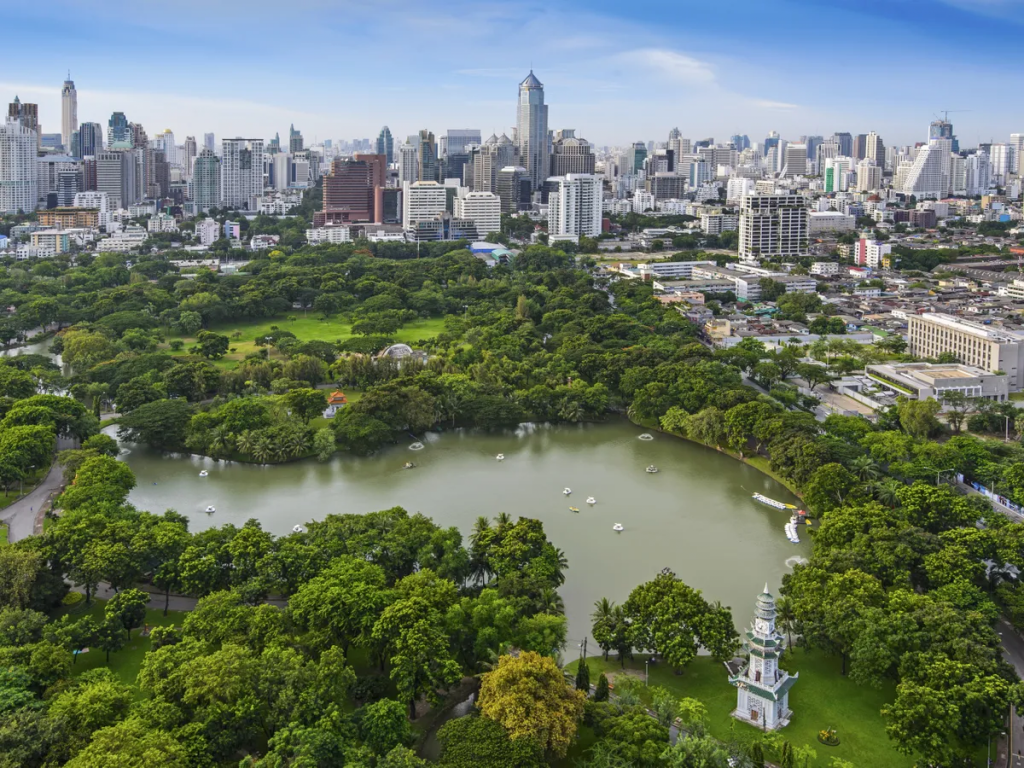 Tucked away in the southern corner of the Bangkok metro area is Lumpini Park, a sprawling green space that provides much needed respite from the hustle and bustle of the fast moving city. Composed of expansive gardens, thick trees and an artificial lake in the middle, Lumpini Park is a favourite place for picnickers, joggers and those looking to have a leisurely stroll amidst nature before they go back to their lives in the concrete jungle. With gym and yoga facilities available for those looking to keep themselves fit, the park also houses a group of softshell turtles that pop their head out from the water from time to time. In addition, don’t forget to watch out for the 4 foot long monitor lizards that skimp around the grass, terrifying onlookers due to their sheer size alone. 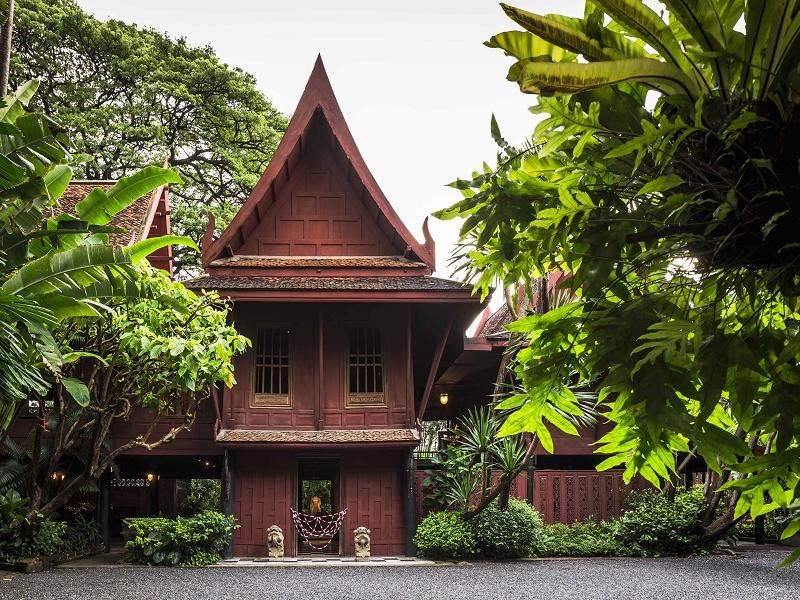 Tucked away in a quiet corner of central Bangkok, is a series of red buildings surrounded by trees commonly referred to as Jim Thompson House. Belonging to the famous American businessman Jim Thompson who made the local silk famous across the globe, Jim Thompson’s House is a cultural melting pot housing buddhist statues, local paintings and porcelain ornaments from across the region that Thompson himself collected during his life. The bright red color scheme stands out from the rest of the area, giving the house a highly unique flair. Intricately designed and beautifully maintained, the Jim Thompson House is an important historical and cultural landmark of old Bangkok and one of the most visited tourist attractions of the city. 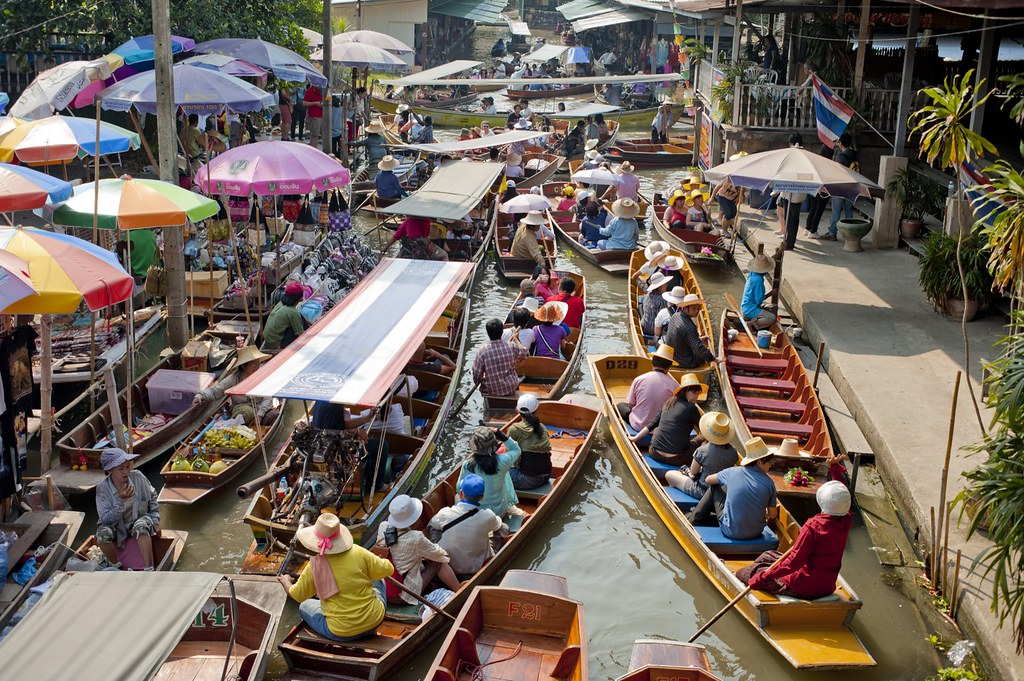 What if an expansive weekend market existed entirely on water with wooden boats replacing stalls as avenues of commerce? This is the entire idea of the Damnoen Saduak Floating Market that is organised every day on the Damnoen Saduak canal. Filled with countless boats selling everything from noodles to vegetables and meat, the Floating Market attracts both domestic and foriegn tourists from all over. Although most of the stuff sold here tends to be a little overpriced, this is no reason for concern as haggling or negotiating is considered to be a norm all across Thailand. The market opens from 7 am all the way till noon and at any given time, countless tourists can be seen trying to take instagram friendly photos across the entire length of the canal. Any visit to Bangkok is thus incomplete without a trip to the Damnoen Saduak Floating Market. 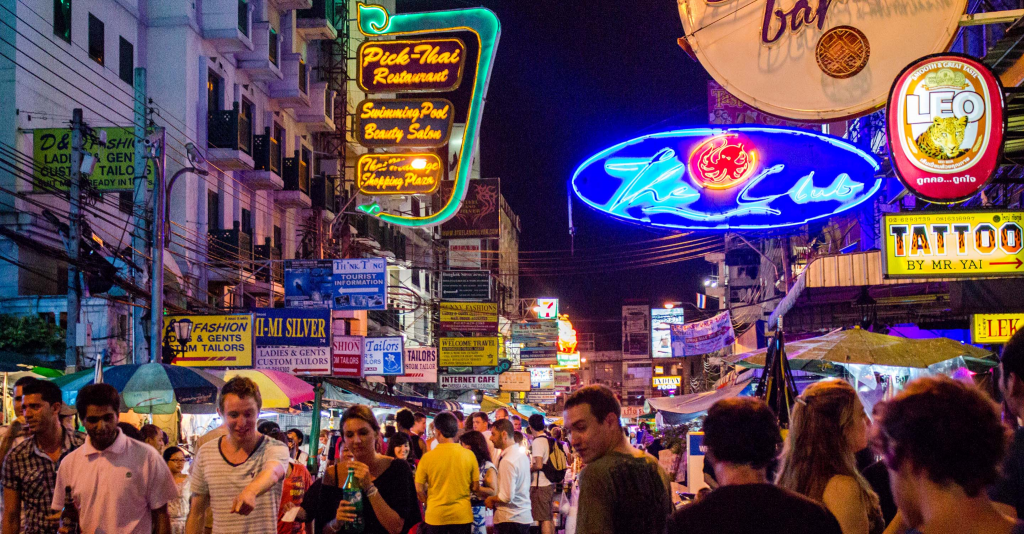 Known as a backpacker’s paradise, Khao San Road is a long strip that contains cheap hostels, affordable restaurants and inexpensive beer. With street food hawkers dotting the sidewalks and attractive bar girls enticing customers into their establishment, the party never stops at Khao San Road. With big colorful neon signs flashing through the whole night and loud pulsating music drowning out everything else, Khao San Road is the perfect place to experience the party side of Bangkok. The road is thronged by western college students and curious onlookers for most of the night and low budget travellers can find extremely affordable food and lodging here, if they dont mind the thumping music that emanates from the whole strip. 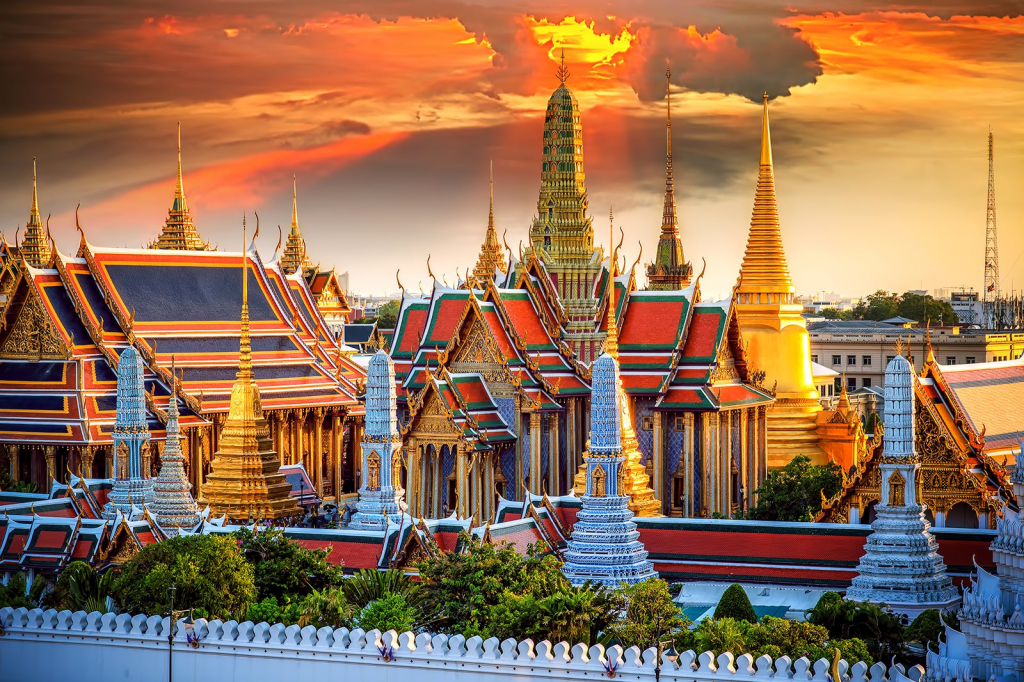 A stunning piece of architecture that attracts visitors from all over the globe, The Grand Palace rests beside the Chao Phraya River in central Bangkok. Formerly the official residence of the kingdom’s kings and queens, The Grand Palace is now a cultural museum and consists of a series of complexes, each with its own gold statues and intricately designed murals. Not only does the famous Temple of the Emerald Buddha rest within the Palace’s walls but the famous reclining buddha of Wat Pho is located just beyond the southern periphery of the Palace as well. Easy accessible by both metro trains and buses, The Grand Palace is perhaps the most famous tourist attraction of the city, mesmerizing visitors with its intricate architecture and rich cultural history.