Tickets for BREAK THE SILENCE: THE MOVIE On Sale Beginning Today Across the U.S. and Canada 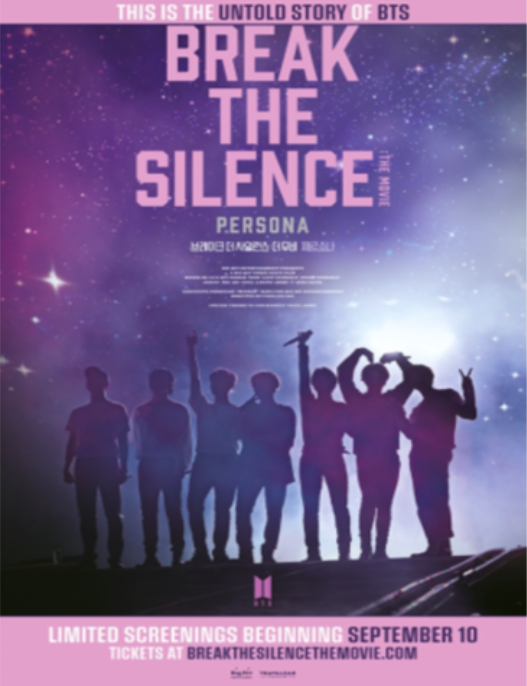 In cinemas today in over 60 countries through Trafalgar Releasing

Screening across the U.S., Canada and over 45 additional countries beginning September 24

London, UK – September 10, 2020 – Big Hit Entertainment and Trafalgar Releasing are pleased to announce that tickets are now on sale beginning today across the U.S. and Canada for BREAK THE SILENCE: THE MOVIE.

In addition, audiences in over 60 countries will be able to see the fourth BTS feature film today. The latest film finds the band at the end of the BTS WORLD TOUR “LOVE YOURSELF: SPEAK YOURSELF,” with the seven members telling their personal stories never voiced before.

Audiences for BREAK THE SILENCE: THE MOVIE will be able to view their record-breaking single “Dynamite” music video on the big screen before the film.

Also, with the global screenings, ten types of official products including postcards and posters of movie scenes are available for presale on Weverse Shop starting September 10, 11AM KST / 3AM BST. More information can be found on Weverse Shop.

The film will be in theaters for a limited time with more screenings in additional territories, including the U.S. and Canada beginning September 24.

To find a full list of dates and to purchase tickets, visit www.BREAKTHESILENCETHEMOVIE.com. Event and ticket on-sale dates vary per territory and subject to change based on the status of local cinema re-openings.

About BREAK THE SILENCE: THE MOVIE

Title: BREAK THE SILENCE: THE MOVIE