The Land of Cute: Meet Some of Asia’s Adorable Animals Part One

Life’s tough, and in today’s overly political and problematic society, it’s easy to feel burdened by all the negativity society has to offer. Let’s take a load off and spend five minutes together looking at cute animals just because we need something to distract us sometimes. While we’re here, let’s take some time to learn about these adorable critters. 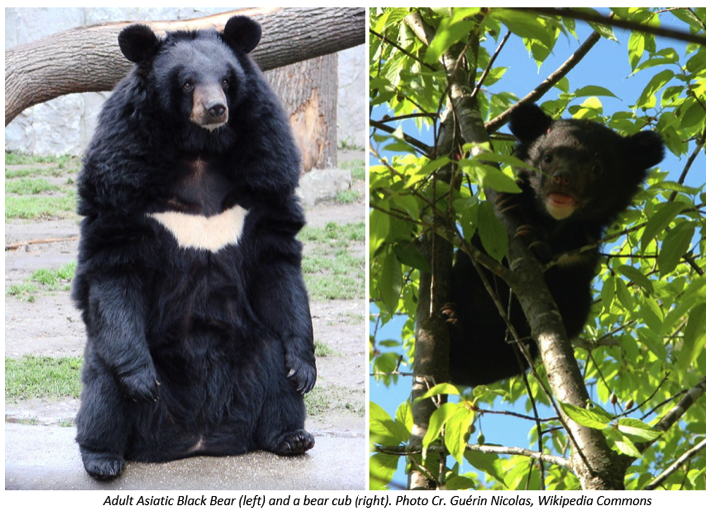 Known as the Himalayan Black Bear, the Asiatic Black Bear can be found in Iran, Pakistan, Afghanistan, Myanmar, the Himalayas, and parts of South Korea, North Korea, Japan, and China. The bear’s most recognizable feature is the white “V” on its chest which is said to resemble a sliver of moonlight, thus its nickname of “Moon Bear.”

In the wild, the bears are diurnal (out during the day), but near villages and cities, they’ve taken on nocturnal characteristics. They are herbivores, but they have been known to attack humans to protect themselves and their young.

Unfortunately, populations of the Asiatic Black Bear are dwindling due to poaching as different body parts are used for traditional medicines. Deforestation is also contributing to their plummeting numbers.  China, Japan, parts of India, Taiwan, Russia, Korea, and Vietnam consider it a protected species.

Out of the 13 native otter species in Asia, the Asian small-clawed otter is the smallest. Located in Southern China, Southern India, Indonesia, and the Philippines, they share their habitats– small streams, rivers, marshes, rice paddies, seacoasts, mangroves—with three other otter species: The hairy-nosed, Eurasian, and smooth-coat otters. The otters live in “families” of 10-15, although they are solitary hunters.

The otters are listed as a “vulnerable species” due to habitat loss, hunting, and water pollution. 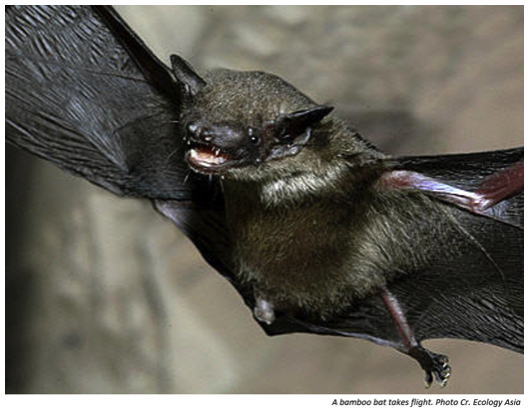 While cute in the creepy sense, the bamboo bat has three sub-species: The pygmy bamboo bat, the lesser bamboo bat, and the greater bamboo bat. One of the species was discovered in China in 2007.

The bamboo bat’s indigenous to Borneo, the Philippines, Bangladesh, Laos, Thailand, Cambodia, Vietnam. South China, India, Indonesia, Malaysia, and Myanmar. The marking characteristic of this bat is its flat head and fleshy foot pads, the latter of which helps it cling to bamboo stalks. Luckily, this little cutie has abundant populations, so it’s not listed as a vulnerable species yet. However, deforestation could soon threaten the critter.

Calamian deer are considered endangered due to the increase of housing and urban structures, deforestation, and hunting and trapping. The deer are used as food, specimen collections, and even jewelry and other trades. Even with conservation in-place, the population still continues to dwindle. 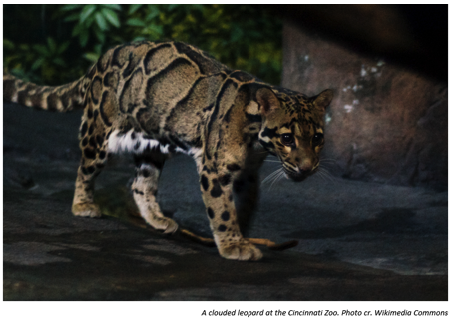 Many encounters with the clouded leopard mostly come from viewing them at the zoo. Since it was discovered in 1821, the clouded leopard still eludes people in the wild, so it is unclear what numbers exist in the leopard’s natural habitats. However, there are an estimated 10,000 clouded leopards in Southeast Asia, specifically in Malaysia, Vietnam, South China, and the Indonesian islands of Sumatra and Borneo. This big cat—which is among the smallest of the big cats—is considered a vulnerable species. As far as researchers can tell, they also live solitary lives.

In China, the clouded leopard is known as the “mint leopard” because its spots look like mint leaves. In Malaysia, they’re known as tree tigers. In 2006, a new species of clouded leopard was discovered in Borneo and Sumatra. The neofelis diardi variety is darker and has longer canine teeth than its mainland cousin, the neofelis nebulosa. 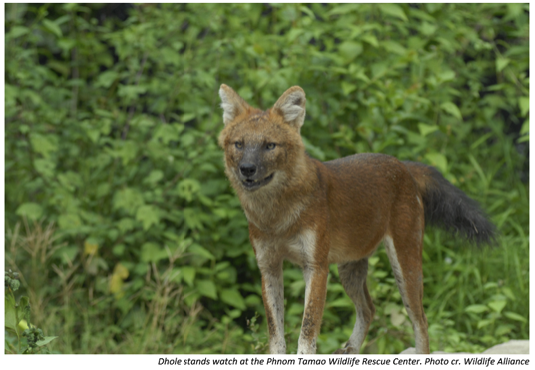 Native to central, South, and Southeast Asia, the dhole—which is also known as the Asiatic wild dog, the whistling dog, Indian wild dog, red dog, and the mountain wolf—is an endangered species in the canidae family. Sadly, diseases from domesticated animals, loss of prey and habitat, species competition, and being killed off by farmers contributes to their population decline. It’s estimated only 2,500 are left in the wild, making them more endangered than tigers. Unfortunately, conservation efforts aren’t strongly in-place for the whistling dog of Asia.

Dholes are about the size of a small German Shepherd, but they have features and markings that resemble a fox. This wild dog has a wide-range of vocalizations that range from clucking like a chicken, meowing, screaming, and whistling. 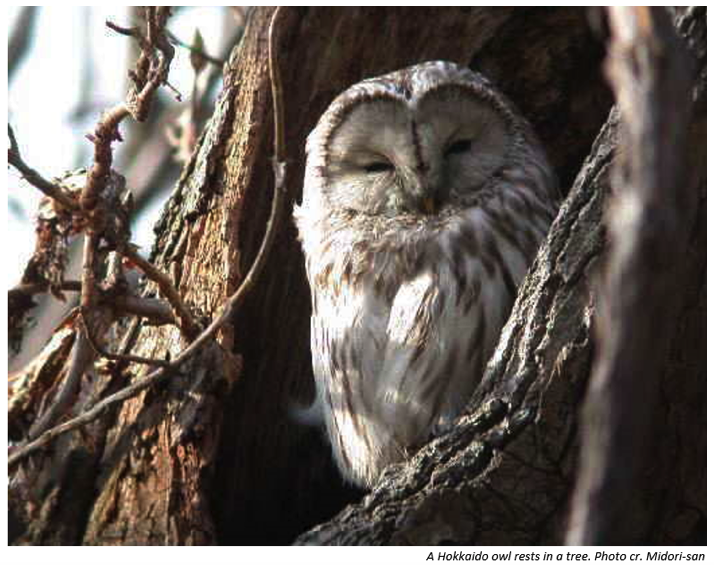 Considered a sub-species of the Ural Owl, the Ezo fukuro is an owl that is unique to the Japanese island of Hokkaido. This cute, fluffy owl is visible year-round and is recognized by its “hoh-hoh, guruk-hoh-hoh” call. When asleep, the little fluff looks like he’s blissfully smiling. The name Ezo fukuro translates to “Hokkaido owl.” Ezo is the old name for the Hokkaido prefecture, while fukuro means “owl.” 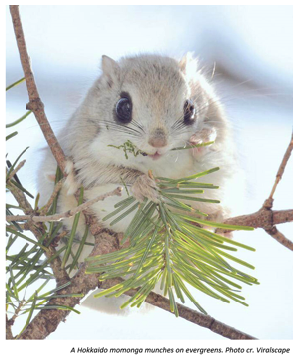 Also known as the Siberian flying squirrel, the Ezo momonga is another cute critter that’s unique to Hokkaido. Recognized by his round, chubby appearance and large eyes, the Ezo momonga been chief among the adorable animal residents in Hokkaido.

This little flying squirrel can glide silently for up to 100 meters (328 feet). They are primarily nocturnal as to avoid natural predators. During the day, groups of them nest in trees.

The Ezo momonga is considered to be Hokkaido’s unofficial mascot and appears on the island’s regional railroad tickets. 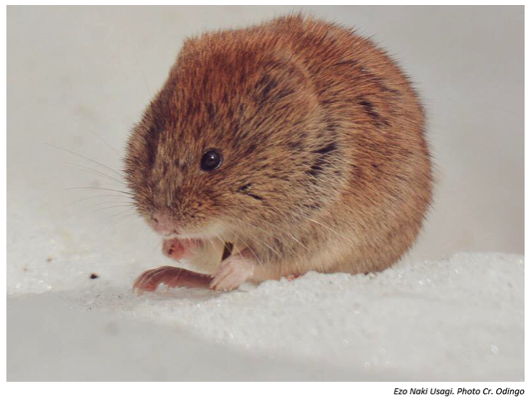 Hailing from Hokkaido, the Ezo naki usagi, or Hokkaido crying rabbit, is a sub-species of the Northern pika. This little herbivore, like its pika cousins, loves to dwell in mountainous regions. He’s the most active during dusk and dawn.

There is a belief that the crying rabbit is the inspiration behind the popular Pokémon character Pikachu. The resemblance is there! 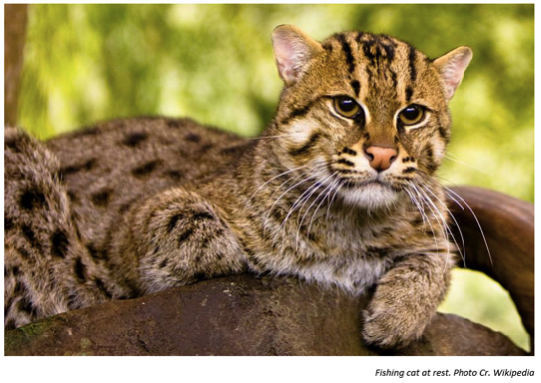 Listed as vulnerable by the International Society of Endangered Cats, the fishing cat’s numbers have sharply declined due to the destruction of its wetland prowling grounds. Commercial fishing and hunting also contribute to the decline, and they are believed to be extinct in Kerala, India.

The fishing cat has population “pockets” through South and Southeast Asia including Nepal, the Himalayas, India, Cambodia, Bhutan, Sri Lanka, Bangladesh, China, Indonesia, and parts of Thailand. Pakistan also has some records of the cat. However, in some places, namely Thailand, the cats are rarely seen. While they are believed to be found there, there are no confirmed sightings in Laos, Malaysia, and Vietnam.

In Bangladesh, Cambodia, China, India, Indonesia, Myanmar, Nepal, Pakistan, Sri Lanka, Thailand, hunting the fishing cat is prohibited; in Bhutan and Vietnam, people can hunt the cat outside of the protection zones.

Like the name implies, fish are the fishing cat’s main diet, even though it has been observed to eat rodents, insects, reptiles, snakes, and some cattle. 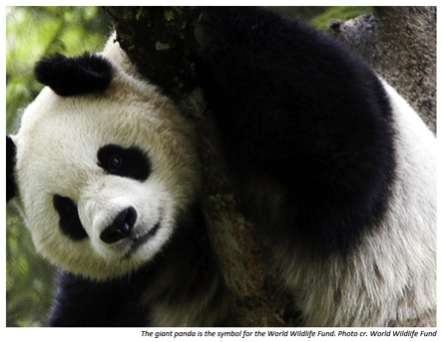 One of the world’s most-known and most-loved animals, the giant panda is a well-known symbol of friendship and often recognized as one of China’s most famous symbols. The panda was once considered endangered, but wild panda populations have increased. In 2016, the International Union for Conservation of Nature upgraded the panda’s status from endangered to vulnerable (conservation reliant).

Pandas are found in the mountains of Sichuan, Shaanxi and Gansu provinces in China. They are omnivores. In China, they are known as 大熊猫 (dà xióng māo), which translates to “big bear cat.” 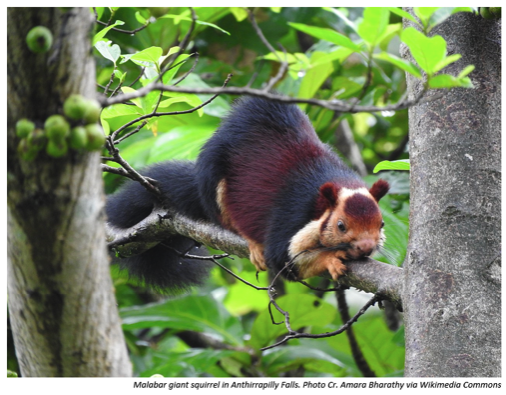 Also known as the Indian giant squirrel, the Malabar giant squirrel is a large, colorful tree squirrel found in India. The squirrels are double the size of its American squirrel cousins, and it’s only active in the forests, making them a rare sight for those in cities and towns.

This omnivorous squirrel is a showy creature known for its brightly-colored coat. His fur ranges in color from cream to black to even orange and purple, the latter of which being a rare coat color for any mammal. Their colorful coats serve as an effective camouflage, helping them to hide from predators. Unlike other squirrels that run off when a predator is near, these giant squirrels freeze on trees to avoid detection.

Out of the animals listed here, the Malabar giant squirrel isn’t in danger yet. While numbers are dwindling due to habitat loss, the squirrels are not considered a vulnerable species.

We have other cute critters still to come! Stay tuned for our next installment!