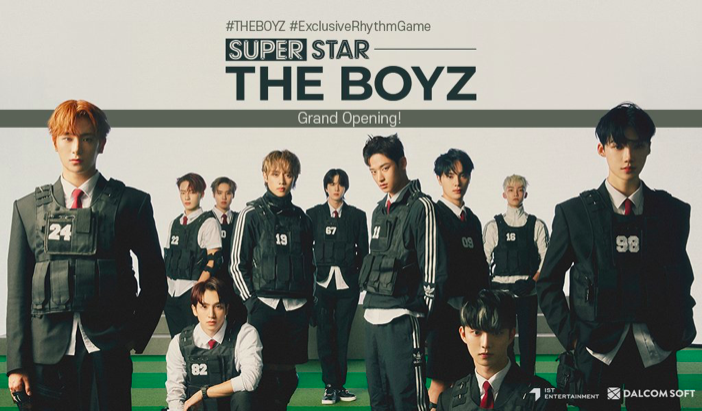 SuperStar Series, the global music gaming app which allows fans to play games that are themed on the latest and hottest chart-topping songs, is announcing the launch of a version featuring music from award-winning K-pop boy group THE BOYZ. Starting today, they will have their music featured in the app. The rhythm-based game series recently collaborated with P NATION and ATEEZ’s KQ Entertainment earlier this year. The SuperStar App has already had successful launches in South Korea and the United States. You can download the SuperStar app for free on iOS and Google and enjoy playing along with your favorite top hits today.

To date, Dalcomsoft’s SuperStar Series has over 70 million downloads worldwide. The app features notable existing labels with their artists that are active and within the growing global market had early success in 2014 with major K-Pop labels such as SMTown. Since then, the company has been actively working with over 140 artists, skyrocketing Dalcomsoft’s notoriety with tremendous success. SuperStar launched in the U.S. in July with mainstream artists such as Billie Eilish, Imagine Dragons, Juice WRLD, Olivia Rodrigo, Rae Sremmurd, and more. The app offers a range of highly engaging rhythm-based action games that are dedicated to specific artists and record labels. The platform is the first to utilize original sound sources from the artists, so players can feel connected within the performance they are playing along with. The behemoth gaming series also incorporates an engaging card collection feature, which allows users to collect, level up and upgrade photo cards with the featured artists in the game.

Powered by Korea-based Dalcomsoft, a leading global music gaming entertainment company, was launched in 2014 and since then has released Fourteen SuperStar apps: SuperStar SMTown, SuperStar JYP Nation, SuperStar BTS, SuperStar Pledis, SuperStar Starship, Superstar Woollim, SuperStar IZ*ONE, SuperStar GFRIEND, SuperStar YG, SuperStar FNC, SuperStar KANGDANIEL, SuperStar P NATION, SuperStar ATEEZ, SuperStar BRANDNEW MUSIC and now SuperStar THE BOYZ. THE BOYZ have shown again and again that they’re one of the most unmatched performers of K-pop’s current generation when it comes to showcasing their unique energy. From live high-intensity performances on hit TV show KINGDOM to breathtaking music videos (and with the viewing numbers to prove it), it’s no doubt they have received a warm welcome this holiday season with their third album MAVERICK. To celebrate THE BOYZ fourth anniversary, they have teamed up with The SuperStar to give back to their fans. The powerhouse collective has been on a whirlwind lately having recently scored an award for “Best Performance” at the 2021 Melon Music Awards, completed their three-day concert dubbed THE 4TH and just recently released their new holiday single, Candles – clearly there is no stopping them. The SuperStar App will have more notable artists and songs added to the app in the upcoming months.