Korean beauty and fashion market are taking over the world. Apart from the US and European scene, Korean fashion is currently the trendiest one. The difference in culture brings different fashion orientation and styles that have become very popular over the last years. Every new season in the Korean fashion trends is extremely unique, introducing styles and trends that are unexpected and new to the other fashion markets. Korean designers are creating pieces that are edgy, with new tailoring and interesting color choices.

The new Spring/Summer 2019 season brings new and fabulous trends in Korean fashion. The charm of Korean fashion can be seen in the subtle and creative modification of the current seasonal fashion trends on a world level, but in a dosed way by incorporating new fashion marks. The new Summer season is no exception to this. There are lots of Summer Korean trends that are driven by the world’s fashion trends. The Korean fashion bloggers and influencers are already diving into the new Summer fashion trends and presenting fabulous outfits.

Here are the biggest fashion trends in Korea for this Summer season:

When the so-called “ugly sneakers” appeared on the fashion scene like the one and only footwear, the fashion crowd was left wondering whether the trendiness of these sneakers would last. Not only that the trend of ugly sneakers lasted, but it is also still strong and it has an addition – ankle socks. This combo of high ankle socks and sneakers were first spotted by Korean fashion influencers and bloggers. The comfortability of the sneakers is well-known and now they come as fashionable footwear that is appropriate for all styles. Despite the regular sporty style, these Korean fashion trends promote the combo as a part of any outfit, even in the more elegant ones. During the Seoul Fashion Week, this combination was spotted on chic shorts and vest outfits and neon midi skirts and training pants.

Blazers are usually considered as tailored garments, that can be worn with almost all different bottoms. This Summer, the fashion trends in Korea present the blazer in a new, more loose fit. The blazers are moving away from the conventional look and fit and look more like jackets, oversized and baggy. Korean fashionistas are sporting this fashion garment in versatile outfit combinations. As an inspiration, the oversized blazer was seen paired with the popular biker shorts, chinos, and even with flowy skirts too.

The world’s popularity of biker shorts has come as a Summer fashion trend in Korea. Without any major changes, the biker shorts come in different lengths and colors. The popular ‘80s fashion garment has made a comeback thanks to the reality star Kim Kardashian and Kanye West’s Yeezy collection. From the first moment, the biker short was spotted on Kim K, before the end of last year, the fashion world was hit with an instant overturn. Many fashion brands have promoted this retro piece as part of their collections. The Korean fashion scene waited a bit and presented the biker shorts as one of the top Summer trends for 2019. 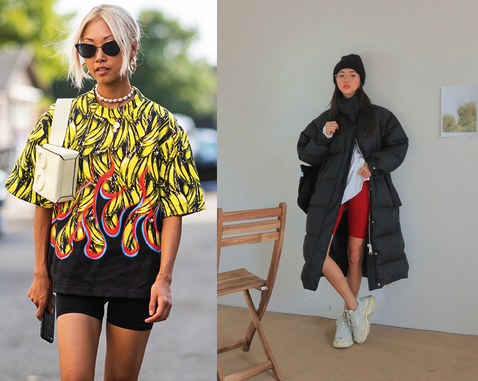 Beige is a neutral, clean and universal color that is easily paired with other colors. Although beige and neutral tones have always been fashionable and never out of style, this Summer season Korean fashion leaves a special accent on the beige tones. Connecting this shade with the beauty of Korean women and their impeccable skin tone, along with the popularity of this color is seen as a trend that is worn head-to-toe. Going all beige is a safe and modern choice, and it can be done with the pairing of different clothing pieces. As the Korean fashionistas are known by their unique outfit choices, the beige trend was seen on dresses, shorts, and t-shirts and matching footwear. 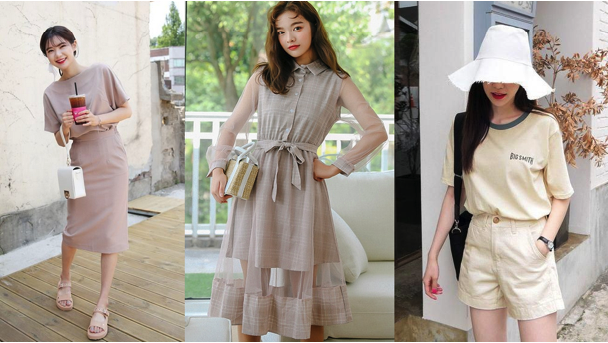 The biggest accessories trend on a world level was the comeback of the hair clips. All the wonderful and shiny hairpins and clips that were worn by the little girls are today’s top trend. They come in all shapes, colors, and embellishments and the bigger they are, the trendier the look is. What was especially popular among the Korean fashionistas were the pearly hair clips. These accessories are worn to the side, one next to the other. The popularity of the trend also allows pairing different styles, for example, statement logo hair clip, with pearly one and shiny metal one. The hair is usually parted to the side and all the hair clips are placed on the same side.

With the upcoming Summer season, the Korean fashion market is expected to introduce even more new styles and fashion suggestions that might later present as a fall trend. Whichever the case, the impact of Korean fashion is noticeable and the Korean IT-girls and fashion bloggers are becoming more and more popular both on social media and in fashion waters.

Which are your favorites for this Summer?