On January 29, 2019, it has been revealed the Big Bang’s Seungri has resigned from his director role at Club Burning Sun.

In a KBS News 7 report, Seungri resigned from his directorship position prior the alleged sexual assault claims and patron abuse claims exploding in the media. The report also claims that Seungri was never really the owner.

“Burning Sun is currently registered under a different name [not Seungri’s],” a club affiliate said. “While the owners were working on the interior to run a club within the hotel, they heard that Seungri was looking for a position for running a club and they proposed that they work together. This is why everyone thinks Seungri is the CEO. It’s true that Seungri participated in the operation of the club but he is not the actual owner of the business.”

In the official statements regarding the incidents at the club, Seungri’s name is not present, further cementing that Seungri may not be attached to the club. Lee Seong Hyeon and Lee Moon Ho are currently listed as the club’s CEOs.

However, the club’s own website states Seungri still owns and runs the club.

Seungri’s resignation seems suspect to many Netizens following the cases surrounding Club Burning Sun. To them, his resignation indicates his awareness of the situations and that he’s simply running away in attempt to save face. Netizens still wish for Seungri to provide a statement about the incidents, especially since he was still the owner during the time the assaults took place. Netizens also want a statement after discovering he was actually at the club the night of the alleged incidents thanks to an Instagram post by Girls’ Generation’s Hyoyeon.

Meanwhile, some now-former fans of Seungri, YG Entertainment, and Big Bang have launched boycott campaigns due to the multiple scandals that follow all three entities.

A Netizen posted a call-to-action for people to boycott Big Bang and Seungri in order to send a message to YG that the group should not be shielded. In a post translated by Koreaboo, the Netizen states:

Don’t buy YG contents.. I’m having a lot of thoughts after Seungri’s controversy.. I just deleted and threw away all the YG songs and albums that I bought for BLACKPINK and BIGBANG. Let’s boycott itㅠㅠㅠ So that money doesn’t become a source of authority.. Let’s show them how scary the people who loved them enough to make them rich can be

If we continue to buy their songs and contents, YG will think the public are fools. They’ll think that time will heal, it will be okay once they go and return from the army, if we send out good songs we’ll make money.. Other entertainment agencies will see it and think, ‘Oh? The other agency was able to cover up anything they did as long as they had money?’..

If you really love BIGBANG and YG artists, shouldn’t you reprimand them instead of shielding them?? So they can walk a better path

I’ve never once written on Nate Pann before. The policemen who arrested the victim, the employee who only cared about his laptop when a woman who was roofied was struggling as she was dragged out, Seungri who was at the club on that day… It made me want to write this post.

I realized how this one situation probably happens much more often than we realize, and I was shocked.. The stories that we see on movies like ‘Veteran’, ‘Inside Men’, ‘The Outlaws’, and ‘Man From Nowhere’ actually happened in real life, and I’m scared our society is going to get worse.

Please don’t do anything about this, thinking ‘This has nothing to do with me. As long as I’m fine.’ Everything that happens in society will affect you in some way at some  time.

Those of you who complain about being born in high class and low class, please understand that way of thinking was born from these kinds of people who think money is power.” 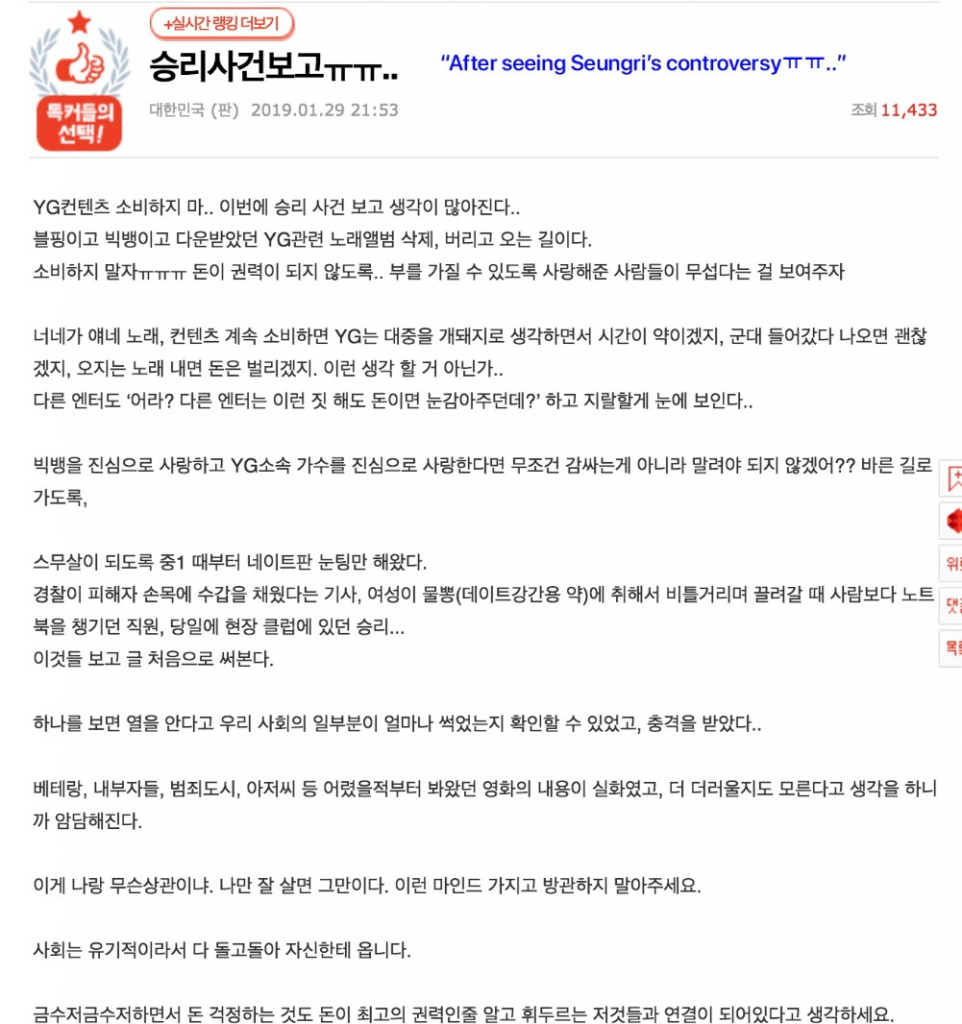 This story is still a developing one. Stay tuned for more updates! Meanwhile, what are your thoughts about boycotting YG and YG artists? Weigh-in below!