You may have seen ‘Rooftop rooms’ from Korean TV and some locations have been made into famous scenery and themes in various movies and TV dramas. Because of the way these Rooftop housings are often portrayed, many viewers seem to imagine it would be fun and comfortable to lodge in such environment.

The media features scenes of people enjoying barbeque on the rooftop, the excitement of fireworks and partying into the night with only the sky above your head.

In reality, the regular rooftop rooms are not very desirable but on the contrary considered as one of the worst places to live in Korea, along with semi-basement rooms; although the two housings are very different in nature. They have their own issues but I will only be discussing about rooftop rooming for this article.

It should also be noted that the accommodation will really depend on where the housing is located and how much the owner has spent on its furnishing and mandatory utilities. But generally, there are definite reasons why these Rooftop rooms are cheaper than an apartment or a villa for instance.

A Rooftop housing normally consists of one room, a toilet without a bath tub and a rooftop; providing a space usually enough for drying your laundry or a little gardening. Other than the low cost of the deposit and rent, the reality of living in a rooftop room can be quite inconvenient in most cases. Usually the rooms are rented by students, or people who live alone on a limited budget.

However, like I stated earlier, the state for each room will be different. I’ve been and visited friends who live in a Rooftop room and they were more than content to stay and live there. 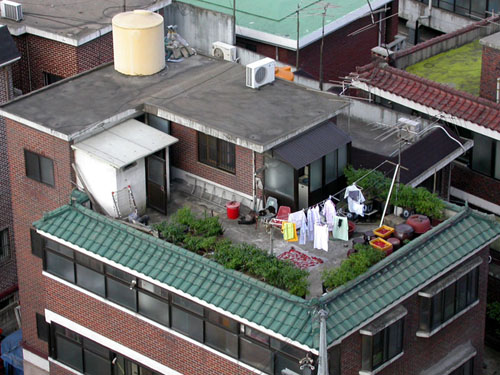 Originally, the rooftop rooms were constructed for storages and not intended for residential purposes. They were later remodeled and constructed for housing. Most Rooftop rooms are not built solidly, therefore may not be the safest part of a building and easy for burglars and other criminals to break into, and there has been numerous reports of incidences.

Other well acknowledged inconveniences of living in the rooftop would be that during the winter, the rooms are extremely cold; unbearably hot in the summer.

If you’re looking to rent a rooftop room in Korea, it’s probably wise to check if the rooms are equipped with proper heating system and air-conditioning for the summer since most rooms do not. Some places might not even facilitate enough space for a normal sized air conditioner. To make situations more inconvenient, I’ve even heard of house owners who don’t allow excessive use of heaters or air conditioning to avoid getting higher bills.

Outdoor fans for the air-conditioners placed on the rooftop can cause a lot of noise and increase the temperature of room. And because Rooftop rooms are exposed directly to sun, the heat will be very intense especially during the Summer.

Most Rooftop rooms will usually be about a size equal to an attic but the size and other qualities will really depend on how the owner maintained the state of the property and each rooftop will be different.

Seoul and other cities in Korea are very populated and because bigger housing is expensive, efficient lodgings at lower cost are vital for many.

It is also a great thing that it is rapidly becoming a kind of ‘trend’ to remodel the Rooftop rooms and transform them into a more spacious and convenient places to lodge in.

One response to “Rooftop Living in Korea”