Denise Coley Posted in Article, Who Said What on Wednesday — 2 Comments ↓

Recently, Thailand has been in the news for a quirky doll that’s said to include a child’s soul inside.
Luk Thep dolls, or “child angels,” have been all the rage in Thailand; so much so that CNN reports some Thai airlines are allowing passengers to purchase seats for the dolls!

Luk Thep dolls are said to bring luck and fortune to their “parents” because of their child souls. Because of this belief, doll owners have taken to treating Luk Theps like real children by feeding, bathing, clothing, and talking to them. Many believe the dolls communicate back to their parents through dreams in order to bring luck.

The dolls don’t look any different from any other doll available at any retailer across the globe. Many look like American Girl, Our Generation, You & Me, Reborn, or So Truly Real dolls or just like any run-of-the-mill baby doll. Just looking at them doesn’t offer any hint they allegedly possess special powers or supernatural abilities.
According to Channel NewsAsia, the trend began in 2014 when Thailand became subject to a military government. This is part of why some experts in the country consider Luk Thep to be a fad. In 2006, a similar amulet fad occurred following a coup. In fact, some view the dolls as a type of trendy amulet, much like the fortune providing kuman thong, which were once widely made from roasted stillborn baby fetuses (some parts of Thailand still engage in this practice). 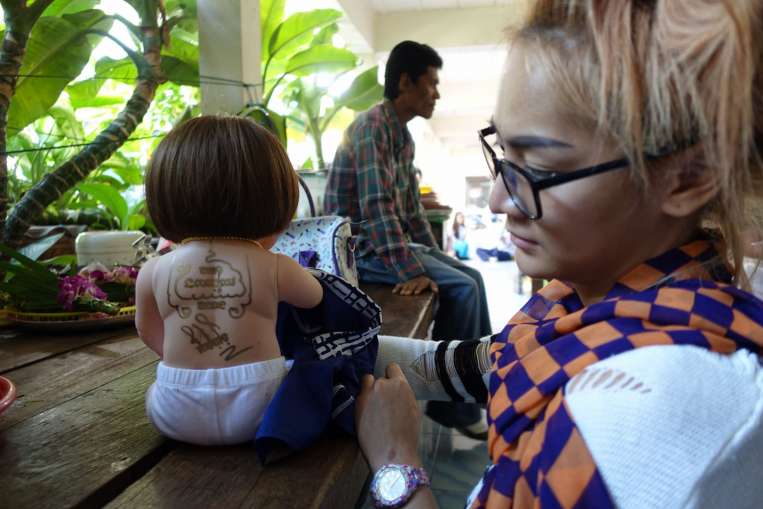 Blessing Ritual
Luk Thep parents have gotten their dolls blessed by monks. During a plook sek ceremony, monks write blessings on the doll’s forehead and back; then they add golden dots to the dolls eyes and over their “hearts.”

If a monk doesn’t perform a ceremony, some people may seek a shaman. These dolls, called Kuman Mahamontra by Master Ohm Mahamontra, are considered to be “holy dolls.” For these dolls, a special ceremony takes place to invite good spirits into the doll which are then sealed in with special prayers.

“My Kuman Mahamontra attracts money, success, luck, and love for those who own them,” Master Ohm said to the Bangkok Post. “All you have to do is follow the five precepts [codes of conduct]. Otherwise the spirit will leave the doll and come back to me.”

Once the ceremonies finish, this is when the true potential of the dolls become realized, and luck and good fortune spill forth for those who believe in the magical qualities.

Hope for the Middle Class
According to anthropologist Asama Mungkornchai from Pattani’s Prince of Songkla University, for patrons of Thailand’s middle class, Luk Thep have heightened popularity as they serve as an indicator that many feel uncomfortable with Thailand’s current economy. When CNN and BBC asked doll owners about their Luk Theps and their names, many of the dolls’ names focused on fortune or luck.

“Generally, Thai people’s lives revolve around spiritual stuff. When people feel bad or insecure about something, they go to pray for what they want, and offer bribes in return for it,” Chulalongkorn University lecturer Manasikarn Hengsuwan said in an interview with the Bangkok Post.

“Also the political situation since the coup has stoked anxiety. People feel financially and economically unstable. That’s where the dolls come in — they help ease that fear,” Thammasat University history lecturer Pipad Krajaejun said. “They are looking for something to hold on to in order to feel more secure about themselves.”
Cosmetologists, actresses, and shop owners praise the dolls and claim they have brought better fortune and more patrons. While there isn’t a correlation between the dolls and better business and profits, those who believe in the dolls cannot be convinced otherwise.

Thai radio host Bookkoh Thannatchayapan is one of the believers of the Luk Thep trend. He believes his doll, which he calls “Wansai,” is the reason for a recent lucky break.

According to Mashable, Thannatchayapan said, “The first day I got him [the doll], I took him out shopping for clothes in the baby section. Right after I paid for his clothes, I got a call that my canceled job was back on!”
In addition to these beliefs, Mungkornchai states the dolls help fulfill a person’s parenting instincts and provide company, especially for younger people who do treat the dolls like children via pampering, feeding, and chatter to help make the dolls feel safe and comfortable.

Businesses Cash In
For some businesses, Luk Theps provide an economic boost. Restaurants offer children’s plates for the dolls so their parents can feed them. Buffets, like Neta Grill, proudly advertise that they serve the dolls.

“Neta Grill is open to all worshipers and we’re glad to serve Luk Thep at children’s prices on the condition that all of the food ordered is consumed,” reads a recent Facebook post.

Thai Smile Airlines, too, looks to cash in on the trend. In January, the budget airlines began offering seats for Luk Thep dolls with restrictions. Like real children, they cannot sit near exits and must be secured at all times, but they do have an opportunity to enjoy in-flight food and drinks.

Upon the announcement, Thai Aviation Authorities swiftly stated the dolls shouldn’t be considered human and should be treated like luggage, thus needing to be stored in overhead compartments.

Street shops and online retailers, too, have even profited from selling special outfits and jewelry for holidays, every day wear, or just to enhance the dolls’ lucky qualities. For many, Luk Thep dolls are a true blessing.

With Luck Comes Warnings
The growing popularity of Luk Thep dolls has sparked controversy and worry among Thai officials. From fears of actual possession to issues of drug smuggling, the ministry and some businesses warn people against the dolls.
Due to their “child spirits,” The China Town Resort Phayao in Tambon Ban Tom, Muang District banned the dolls because guests may have trouble sleeping since the spirits are said to wander in people’s dreams. The hotel worries people may suffer from paranoia if they stay when one of the dolls may be present.

“If patrons have children staying with them, the kids may become frightened and they won’t check in,” Payom Thisri, the resort’s owner, said in an interview with ABC News Australia.

For others, the fear is that people are becoming too obsessed with the dolls and may believe in their alleged spiritual properties. Health authorities, especially, are afraid people are currently relying too much on superstition. Authorities advise people to believe in established beliefs over superstitions and black magic in fear of mass hysteria.

Author Veera Prateepchaikul wrote in an editorial for the Strait Times that “There must be many redundant angels wandering about this so-called Land of Smiles – to match the number of gullible people who have nothing better to do than raise these infant-like Angel Child dolls.” He continues by stating the dolls make “Thai people appear like they have only half their brain functioning. This may be just a trend, started and followed by celebrities. Celebrities, we all know, may be rich and look great physically, but, mentally, they are more often like infants themselves – like the permanently-infantile Luk Thep dolls.”

However, doll owners tell the media they are not mentally ill no matter how crazy the beliefs sound.
The worries regarding potential mental illness surrounding the dolls seems to come due to old and modern religious thinking butting heads. Those who believe in Luk Thep tend to believe in South Asian superstitions and old-school beliefs rather than modern Buddhist religion. Jedsada Chokdamrongsuk, the director general of the mental health department under the Public Health Ministry, points out that old superstitions are currently enhanced by the social media era. In other words, social media helps to spread the word of these “lucky” dolls, thus encouraging orders to also believe. However, these beliefs go against modern Buddhist beliefs that state to not believe in superstitions.

However, Chulalongkorn University director of psychological wellness Nattasuda Taephant suggests the belief is harmless and doll lovers should be left alone.

“If it crosses the boundary of reality, and they believe they can talk to the Luk Thep doll, that would be something concerning in terms of mental health,” she said.

The biggest concern, though, lies in how the dolls could be used to transport drugs and other contraband.
On January 25, 2016, police intercepted a Luk Thep doll loaded with yaba tablets, or “madness drug,” at Chiang Mai Airport. Police warn that raids and other searches are planned to check the dolls for drugs, especially at airports or for anyone heading into and out of the country. At airports, the dolls will be screened and X-Rayed; anyone who refuses will have to leave their dolls behind.

“I have instructed all the immigration checkpoints to be strict – whether they are at airports or the borders. They must also strictly screen ‘luk thep’ dolls passing their checkpoints,” Police General Chakthip Chaijinda said.
Trends Come and Go

Despite potential dangers and mental health worries, Luk Theps are currently here to stay for many Thai people. Even though people outside of Thailand call them creepy and feel weirded out by adults carrying and caring for baby dolls as if they’re real children, some experts consider it a fad that will fade into obscurity in time.

Would you carry around a Luk Thep if it brought you good luck? Weigh in on Facebook or in the comments below!

—-Joelle Halon earned her MFA in English in 2010. While teaching a college humanities course, she woke up one morning realizing she was unhappy. She had a crazy plan: Leave teaching to become a writer. She’s now here at KCrush, so it seems to have all worked out since she writes about what she loves: K-Pop and Korea (although Indiana is far away from Korea).

K-Pop consumed her in the late 1990s, although she’ll tell you Baby V.O.X was the first group she truly loved. B.A.P is her ultimate bias, and she considers Bang Yongguk and Himchan her inspirations to do good. One day, she hopes to thank them for inspiring her. She once got to talk to Nu’est’s Aron and Lunafly’s Sam Carter through their Arirang radio programs, which caused a fan-girl explosion.
In her free time, Joelle loves to draw, write fiction, and engage in other crafty endeavors.