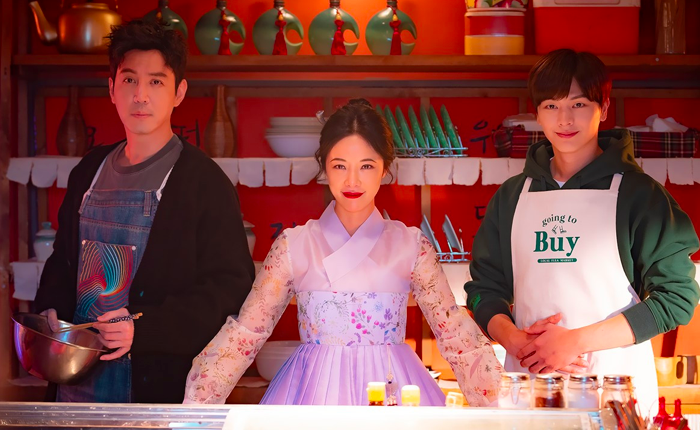 COVID-19 has given many people a renewed love with K-Drama indulgence, and Netflix has become one of the leading sources for K-Dramas for international audiences. Despite 2020’s wretchedness, Netflix has gifted us with a healthy dose of K-Dramas to keep us occupied during quarantine. One of this year’s new dramas, JTBC’s Mystic Pop-up Bar, is one that has a promising synopsis that may interest viewers, but does it live up to what the story summary promises?

In Mystic Pop-up Bar, audiences are introduced to Weol-ju (Hwang Jung-eum), Han Kang-bae (Yook Sung-jae), and Guibangjang (Choi Won-young) as they operate a pop-up bar that not only serves food and spirits, but serves to help people solve their personal grudges by exploring their dreams. The trio work together to help Weol-ju solve 100,000 grudges or else she gets sent to Hell to pay for her sins from 500 years earlier.

From the first episode, Mystic Pop-up Bar shows great promise. The premise of going inside people’s dreams to solve grudges is a refreshing take on working toward appeasing the gods to avoid a Hell sentence, and it is also nice to see blue-collared workers as main characters. The latter helps Mystic Pop-up Bar feel more relatable to the viewing audience as many may be able to see themselves dealing with the everyday struggles of “Retail Hell” or even dealing with bar patrons who sometimes may overstay their welcome. As the show moves forward and each character’s identities are revealed, the realism tends to fade somewhat, but the drop-off is not extreme enough to where people will lose the sense of relatability.

Mystic Pop-up Bar is a slow burn-type drama where it takes several episodes to build up to what the overall conflict is for the show. While this is a lacking trait, one of the show’s strengths lies in the individual storytelling within each episode, with some of those stories hinging heavy on pathos to connect with an audience on a deeper level. As the story unfolds, emotions also drive Weol-ju’s story as her sin beyond her suicide becomes apparent. The reveal helps the audience connect to her more to understand the whys that drive her need to complete her task.

Unfortunately, Mystic Pop-up Bar almost tries too hard to be emotionally driven, and this is where the story falls flat. Partway through, the story becomes predictable, especially with the character reveals, and there is an unfortunate sense of “I’ve seen this all before” with each episode. In fact, while watching the show, some viewers may see it as a knock-off of Hotel del Luna and may draw comparisons between Weol-ju and IU’s Jang Man-wol since the characters are similar personality-wise. The only difference is IU’s performance is stronger than Hwang Jung-eum’s. Because of the similarities, some viewers may see IU instead of Hwang, and this is one of the main issues with Mystic Pop-up Bar. The show had a chance to create unique and memorable characters, but it didn’t quite achieve that goal.

The story, too, falls flat. As mentioned, the concept of exploring people’s dreams to solve conflicts is unique and one that could have set Mystic Pop-up Bar apart. The concept was a theme, but it did not feel like it was utilized as strongly as it could have. In many ways, it felt like an afterthought instead of the main concept.

Another issue with the show was the conflict regarding a 500-year grudge and the villain introduced sporadically throughout the drama’s run. The villain, Kim Won-young (Na In-woo), initially comes across as a cool and dark spirit while preying on people to gain strength, but his arc isn’t utilized strongly, so his presence is more of an afterthought than a well-rounded, well-developed inclusion. Kim Won-young’s ending was a low-point, too. Overall, the character was not necessary and felt added just for “drama” instead of a real plot-device. The show would have done better to build legitimate conflicts in trying to achieve Weol-ju’s goals instead of those goals being met almost too easily—and sometimes laughably– with each episode. 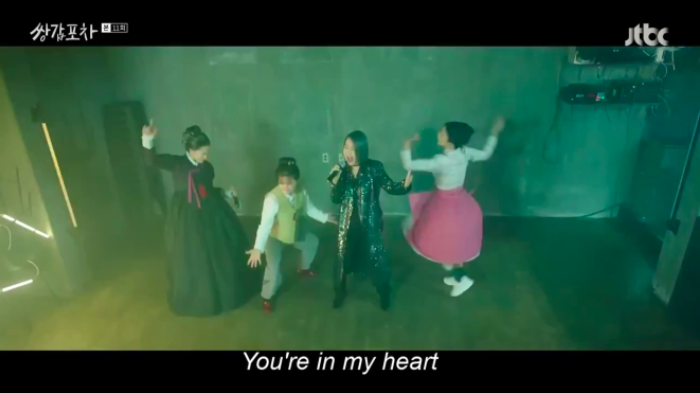 With resolving grudges, toward the end of the show’s run, the methods of solving issues got lazy and outlandish, so it started to feel like the writers stopped trying. For example, in episode 11, Weol-ju’s solving the Cinnabar’s ills via a karaoke session with Chanhwee was tragically cringy and out of place and one of those moments where the show almost lost credibility. While it is true that dreams often do not make sense (see episode six’s conception scenario), the karaoke session was just too far out of line compared to the rest of the drama’s dealings.

Mystic Pop-up Bar does have some bright moments. Choi Won-young is fantastic as Guibangjang as he is funny, heartwarming, and vulnerable. Lee Jun-hyeok as Chief Yeom also provides some strong and humorous moments to make him a standout co-star in the series. Both actors do well bringing dimension to the overall story, and it is fun watching them in each episode.

Along with some strong performances by Choi and Lee, there are some standout episodes that pack an emotional punch. Particularly, episodes five, six, and eight will make the viewer cry and laugh because the stories are relatable and tragic to some degree while maintaining shreds of humor. These episodes feature solid performances by the secondary characters in each scenario, and they do make the show worthwhile.

Other positives Mystic Pop-up Bar has to offer belong to cinematography and wardrobe. The show boasts some beautiful shots around Korea and does well showing the beauty, darkness, and randomness of dreams. Meanwhile, Weol-ju’s wardrobe and beautiful outfits steal the show and help paint who she is as a character. Her outfits bring about a strong, happy exterior while hiding the inner torment she feels. For Guibangjang, his plain, relaxed attire does a great job painting him as a different person than who he truly is, so clothes being used as a mask is a brilliant device that should be applauded.

Overall, Mystic Pop-up Bar is not the strongest drama right now, but it has many moments that make it worth the watch. It does tend to lack conflict-wise by trying to bring in an antagonist, and this portion of the show could have been left out in favor of dealing with more difficult grudges and more personal, heart-reaching stories. The show earns a 2.5/5 rating.