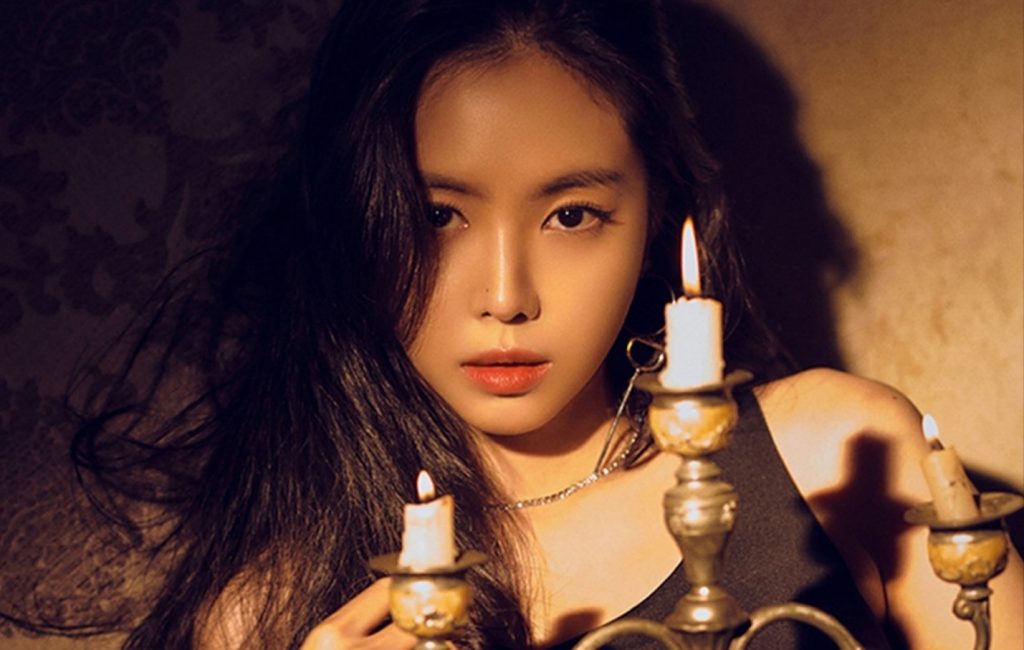 Just ahead of Apink’s 11th anniversary, Naeun announced her official departure from the group. IST Entertainment confirmed the news in a brief statement.

“After discussion with the two companies and Apink members, Naeun has decided to conclude her group activities,” the company said.

Naeun also made an announcement via a handwritten message on her official Instagram page.

Hello, this is Son Naeun.

I worried a lot about how I should say this, and even now, as I write these words, I’m very nervous.

I will be leaving Apink, with whom I have been together for the past 11 years.

Because Apink is a place like family, with whom I have spent a long time together, I made this difficult decision after a lot of debate, and though it wasn’t an easy decision, I plan to become a Panda and cheer on Apink starting from now on.

The members… Chorong, Bomi, Eunji, Namjoo, Hayoung… the many people who have worked hard for Apink from the start, including the IST staff, and the fans, who are the most precious of all: As I look back on the times we’ve spent together until now and our memories, there is no way to express all of my feelings through words, but…

I want to sincerely thank from the bottom of my heart everyone who made my teens and twenties the most radiant, who gifted me this happy time.

I will engrave the name “Apink’s Son Naeun” in my heart, and I think showing you better things in the future, so that I don’t bring shame to that name, is one way I can repay you.

Please give lots of love to Apink, and I, too, will be sincerely rooting for them.

Up until now, this has been Apink’s Son Naeun.

The news, while sad, is not shocking. Naeun was the only Apink member to not resign with IST Entertainment. Naeun signed with YG Entertainment to promote as an actress with the expectation that she would be able to do promotions with Apink when scheduling allowed. Unfortunately, scheduling conflicts have prevented Naeun from engaging in group activities, including the group’s “Dilemma” comeback promotions this past February.

While wondering what words could possibly be of a little bit of comfort to our Pandas, I thought a lot while writing and re-writing this. Even though I know that our Pandas don’t like when we apologize, it hurts my heart so much that as of right now, the only thing I have to say is that I’m sorry. To Pandas who must have been really surprised and very hurt, I want to sincerely say sorry.

After our last special album, all of the members thought and talked a lot about Apink’s future moving forward. As these are the members who have been together for the difficult and happy times over the past 10 years, this moment does not yet feel real to us either.

In order to maintain Apink for 10 years, each member has made numerous sacrifices and put in a lot of effort. Since we know that so well about each other, this is a decision we’ve made after really thinking about what is best for each other.

Although our Pandas must be so sad, I hope that you will watch over our new start. While promoting as five members this time, it was also very difficult for us mentally, and we worked really hard in case Pandas noticed an empty space. In the future, I think we will have to work even harder.

While Pandas’ hearts likely won’t feel better in this moment, I promise that we will show you that we are working harder. Please trust this once that our members are always worried about Pandas and have always prioritized Apink. Let’s cherish our past pretty memories and I hope we can make new happy memories together.

Even if it takes a long time, we will work harder. Once again, I sincerely apologize Pandas. We will greet you again soon with good music.

“Starting with their upcoming 11th anniversary fan song, which is scheduled to be released on April 19, Apink will be reorganized and continue promotions as a five-member group with Park Chorong, Yoon Bomi, Jung Eun Ji, Kim Namjoo, and Oh Hayoung. Son Naeun has ended her activities with the group, and they will be cheering each other on from their separate paths.”

Good luck to Naeun and Apink on their future activities! In the meantime, look forward to Apink’s anniversary song on April 19!