With the summer season upon us, MVs featuring non-summery themes are hard to come by, but those that aren’t summer-filled are hidden gems. Take JihoonOwl’s Project III’s “Fly to Your Dream.” The song, which was released July 2, features Kyuhee Song on vocals; and according to the YouTube description by 1theK, “The song is actually the autobiography of the author, Su Young Kim, who is travelling around the world after overcoming difficult childhood, and is singing the message like a musical that if you continue to challenge for your dream with courage over difficult surroundings, you can reach the goal eventually.”

“Fly to Your Dream” is a soft, whimsical song with some rock elements that tells a story about dreams and the possibilities that stem from them. The lyrics have a sense of hope and wonder, making the song suitable for young people who need encouragement. The overwhelming message is that even when people discourage you, you should stand for your beliefs and prove naysayers wrong (“People laugh at the girl, ‘You have no luxury for the dream.’ But the girl claimed ‘Until when will you blame your own destiny? Don’t you feel sorry for your life which never comes back’”).

The video closely matches the lyrics. A little green-haired girl has a dream of flying away to a different land. Her current world is broken, almost dystopian with her people lining up for food and working in deplorable conditions. She knows there’s a better life available elsewhere, and she convinces her friend (or perhaps her father since he is older) that there is a different place to go to start fresh. Others tend to discourage her suggestion until, one day; she jumps from a cliff toward the ocean, sprouting wings. From her, she takes her friend and some others to the better land where it is assumed they start a new life. 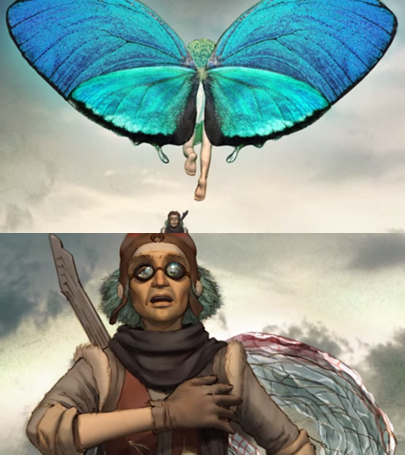 However, at the very end of the MV, the little girl is nowhere to be found, but her friends are, creating an ending that’s open to interpretation. Did the little girl’s wings actually sprout because she believed so strongly in herself before she fell into the ocean, therefore ensuring she survived the jump; or did she land in the ocean and pass away, her spirit exiting her body before she landed then leading her friends to a better life? Since her physical presence is absent at the very end, the latter could be assumed, especially since she changes into a butterfly, one of the universal symbols of life after death. Again, this is open to interpretation.

The wings are the most important element of the song and MV as both allude to them often. When the MV begins, the child does not have wings. As she dreams and her childlike wonder and optimism grow, as do her wings. However, her wings remained crumpled as a symbol of how others tried to crush her hopes. When she started to spark wonderment in her friend, he, too, also sprouted wings. This serves as a symbol of how optimism and hope can change someone’s outlook on life.

While the song and story go hand-in-hand, what really needs to be discussed is the MV’s artwork by Scenario. Everything about the artwork made the video feel like a storybook come to life! The characters feel reminiscent of the 1980s’ TV show The Littles meets the 1994 Don Bluth film Thumbelina. Subtle animation, 2D, and 3D combine to create a whimsical experience that makes the MV a standout since it’s outside the usual poppy colors and dance themes. The contrasts between the dystopian and hopeful images and the dark and lighter paint schemes provide the necessary sense of conflict and resolution to make the MV a beautiful picture book.

Since the MV is so different and off the beaten path, it is a standout for 2015 already. Chances are with so many first and second tier groups making their comebacks this month, this gem will be buried and forgotten quickly. However, “Fly to Your Dream” earns a solid 4/5 for artistry.