The Korean-Cuban history is still nowadays, a subject which is not widely spread, although these two nations share in common, an important past. It all starts in 1905, when 1,033 Koreans left their home to Mexico to search for a better life. They set sail from Incheon in South Korea, arriving in Mexico’s Yucatan after one month, only to find that their dream land was a poor field with hard labor work. Among the demographic of this large group, there were 31% of children (below 20), 68% of adults (20-50) and 1% of old (above 50). Rising another hope, in 1921, 288 of them set sail for Cuba and arrived on May 25th.

According to the research made by Hea-Jin Park, Koreans were having a rough time in the late nineteenth century, when Japanese influence on the Korean peninsula was increasing day by day. Years of floods caused years of food crises, bringing its flow of plagues over Koreans such as disease outbreaks like cholera. Monetary instability, economic inflation, tax burden as well as government corruption and crimes added up to a situation which was already painful to live. This motivated Koreans to massively immigrate towards Russia, northeast China at first and then Hawaii in 1902. Due to the rising interest of Mexico henequen plantation owners in recruiting Asian labor, the emigration company turned their target toward Koreans, after facing failures in China and Japan because of rejections from both governments. They put up exaggerated advertisement that attracted around one thousand people to join.

Although the emigration company failed to get any legal permission, while this was well known to Korean officials and there was no one actually in charge, the cargo ship managed to depart from Jaemulpo Harbor and sailed for Mexico. While Koreans expected a new prosperous life, a field of slavery was waiting for them upon arrival. Few people died on the trip, many more passed away due to the harsh work, the extremely hot temperature, the diseases and the lack of treatment in the fields of henequen. Losing their freedom became the price for this long trip over the ocean. Trying to escape would indeed be charged with cruel punishments.

After the completion of their four-year contract, most Koreans had no money, nor resources to go back to their homeland, and Korea was still under the control of Japan. Hawaii, where Koreans had a better living condition, could have been a solution, but that solution failed. Instead, they decided to travel to Cuba, leaving the port of Campeche in 1921. 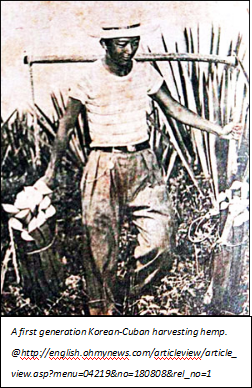 Cuba was a Spanish colony for almost 400 years until 1898. At the beginning of the 19th century, half of the population is black and two third of them are under slavery. Although Cuba won its independence in 1902, it was under the control of the United States until 1959. They controlled their Sugar, Tobacco, Shipbuilding industries, built factories and occupied the lands. As a result of dependence on American economy, Cuba had suffered from a heavy strike during the Great Depression (Black Tuesday) from 1929 to 1933. Cuba is very often called a “stew” of multiple ethnicities. In the mid eighteenth century, many workers from Japan, China, India, Syria, Turkey, Lebanon, Mexico, in addition to other Caribbean nations, went to work in Cuban sugarcane fields. Koreans were the last ones to arrive in 1921.

Among the 288 who went to Cuba, 94 were from the original 1,033 Koreans and the rest were their children. They stayed 17 days in the boat, refusing to be recognized as Japanese, before accepted as “Coreanos”. Again to their biggest disappointment, the sugarcane business was deep plummeted because of overproduction. The Koreans had to return to henequen farming, where they gained experience, to work as hard labors. They had to work from 4am to 5pm under the heating sun. Many people became trainers or supervisors afterward because of their good skills.

Emigration became immigration. Korean-Cuban community started to grow in the place called El Boro, where schools and churches were built up. It birthed the youth and women’s society of the Korean National Association through the liberation movement. The older generation preferred to live in a separated community which created a kind of self-discrimination. But the Cuba Revolution soon broke the boundaries by giving all children a free education.

The Cuba Revolution we are talking about, was in 1959, led by Fidel Castro. He became the leader of Cuba until 2011 and Cuba became a one-party socialist state under his administration. Many Koreans fought with Castro for the revolution. Because of the overturning changes in economy, politics and society, approximately one million Cubans moved to the US over the last 50 years, mostly in Greater Miami, Florida. Some of their descendants now moved there too, because of many reasons such as to get a better education.

Today, around 800 descendants of Korea are still living in Cuba. Five generations on, most of them have lost their language, although there is a true blood connection. Most of them are still poor, while only a few became doctors, teachers and engineers. Similar cases are observed with Korean-Mexicans. Korean-Cubans are celebrating every Independence Movement Day on March 1st, gathering and sharing Korean food. With the rebuild of diplomatic relations between Korea and Cuba, Korean soap operas, K-pop stars, Korean music, festivals are entering the land of Cuba, getting more and more popular. Many of the Korean-Cubans aspire to go to Korea one day, to search for their roots. 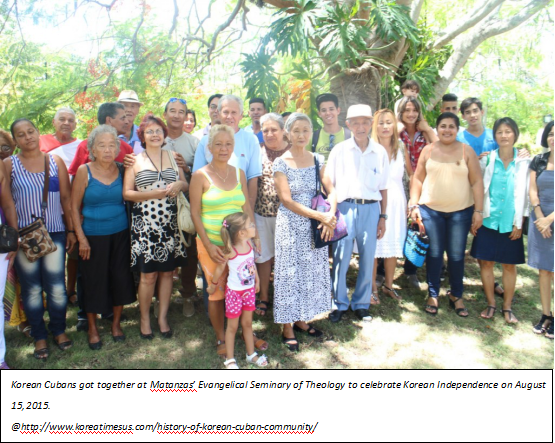 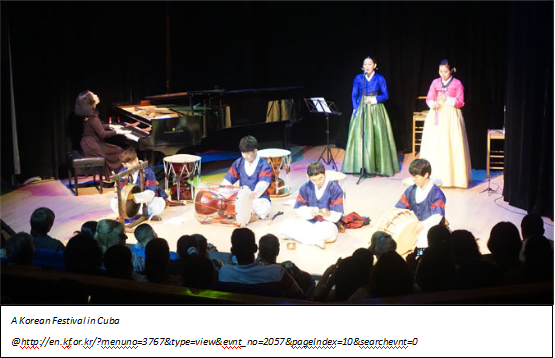 More on this facinating subject can be found at the following link: https://koreaexpose.com/koreans-cuba-jeronimo-lim/  A full documentary will be coming soon.