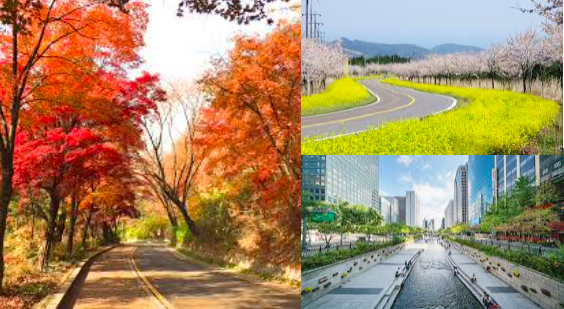 Korea is known for its perfection culture that goes beyond the normal with every aspect of life. The normal paces and strolls have been perfected and given an exquisite ambience through well designed lanes. The diverse themed walking lanes births the desire to get out of one’s comfort zone and enjoy the beauty and creativity that the walking paths have to offer. Here are Korea’s most eminent walking trails.

The trail, positioned in Jeju Island, is an over 422km footpath comprising of over 20 main routes that connects from the coastline to Jeju International Airport. The trail is coupled up with eminent sites including the UNESCO World Heritage site, Seongsan Ilchulbong and Sanbangsan Geopark among others. The trail’s most prominent route is the Siheung-Gwangchigi Olle route which connects to the Ocean from Oreums. It offers scenery such as grass fields and Malmi Oreum and Al Oreum extinct volcanoes. The Onpyeong-Pyoseon Olle route is also illustrious for its mandarin and camellia pathways. Route 7 is another visitors’ favorite route as it offers magnificent views of the canola, wild radish, camellia and royal azalea flowers. Overall, the Jeju Olle trail offers panoramic island and mountain views, extinct volcano landscapes and water bodies and flower sceneries.

Developed as part of the urban renewal project, the over 10km walking path is a delightful refreshment from the bustle and hustle of the adjacent urbanization as it is situated and runs alongside the heart of Seoul city. The trail stems from Cheoggye Plaza to Yongdu, with the better part of the ecological and art-filled trail beow the main roadway, and extends beyond under 22 bridges leading to a series of tranquil spots. In addition to the buzzing nightlife around Cheonggye Plaza, the Cheonggyecheon trail offers access to Insa-dong Street, Sejong Center, Deoksugung Palace, Changdeokgung Palace, Changgyeonggung Palace and Dongdaemun Design Plaza.

The ecologically rich pathway extends miles from Jeju Market to the apex of Cheonggyecheon stream. Known for its night walks and exercises as one enjoys the stream’s breeze and escape from the busy city life, the pathway offers a therapeutic side of Seoul. Some of the prominent sites the stream offers access to include Donamdong Catholic Church, scenic sceneries under the Haneudari Bridge, and a trail of diverse flowers. The stream also offers access to Bomun Market, Ihwa Mural Village, Naksan Mountain trail, Samsung Alley Market among others through the various alleys along its path.

Famously known as the N Seoul Tower trail, the path is sandwiched between lanes of cherry blossoms and other colorful flowers and trees. Located in Namsan Park; which is endowed with other breathtaking pathways, the N Seoul Tower trail is eminent for its ecological aspect deeply rooted in the heart of Seoul city. The pathway is filled with breathtaking seasonal treasures from the fresh bright spring to the autumn foliage glory whose blend of brownish red hues resembling sunset rays. The trail also offers access to Namsan Seoul Tower, Seoul Tower Plaza, and Namsangol Hanok Village among others.

The uniquely historical elongated wall is comprised of various tracks along its path and sits on the Baegak, Naksan, Namsan and Inwangsan ridges. The over 18km long trail comprises of 6 paths including the Baegak, Naksan Mountain, Heunginjimun gate, Namsan (mongmyeoksan) Mountain, Sungnyemun gate and Inwangsan Mountain trails. In addition to its all-year round nature scenic views, especially in spring and autumn, the Seoul City Wall trail is rich in Korean ancient history including the Korean War. The trail’s most popular walking pathway is the pine tree path whose trees bear bullet traces made during the 1968 battle between the North Korean forces and South Korea. Other popular spots include Gokseong lookout, Bukchon Hanok Village, Samcheong Park and Bukjeong Village among others.

Dream Forest is Seoul’s fourth largest park after Seoul Forest, Olympic Park and World Cup Park. The city’s hustle getaway sits on an extensive area with numerous walking trails, especially the wooden path stretching along the scenic moon reflecting pond, Wolyeongji pond. In addition to the fauna and flora overwhelming the space and creating therapeutic sceneries the craftily designed paths, including the Broadway pathway, are coupled up with interesting sites including the three story observatory, water parks, Changyeongwigung Ancestral Shrine and wild grass garden among others.

Located in Juwangsan Mountain, the over 2km course runs from Daejeon temple through Jahagyo Bridge to Yongchu waterfalls. The deep hued autumn foliage and bright spring colors are a marvel as one walks though the trail in addition to the picturesque canola flowers and green barley views. The Jusanji pond along the trail present panoramic views as the water reflects under the sun rays penetrating the forest of trees. Juwang Mountain’s rock cliffs offer spectacular rock formation views and while the deep valleys showcase the gushingly cascading waterfalls that carve through rocky outcrops situated in the pine and maple forest. The trickling rivers through various sections of the Juwang valley trail blend with the therapeutic effect of the surrounding flora and fauna to bring a refreshing walking ambience.

The over 74km trail is located in Daebu Island and is comprised of 7 courses including the vineyard road, forest road, sunset road, and tideland route among others. Stemming from Bongameori dock, the trail stretches to Daesong complex via Tando port. The most eminent feature of Haesol gil trail is the Sunset observatory connecting the sea routes ant waist bridges. In addition to enjoying the migratory birds, the west coastal tideland and black coral forest, the trail is coupled up with ancient and coastal paths that offers an exquisite experience.

Located in Seodaemun district, Seoul, the over 7km elevated wooded trail encircles the Ansan Mountain. Given its barrier-free walking paths, visitors of all ages can enjoy the walks while being immerse in the beauty of flora and fauna. The trail’s accessibility to baby carriers and wheelchairs further articulates its barrier-free characteristic. In addition to the therapeutic ecological splendor, the pathway offers extensive scenic views of the mountain. The trial comprises of various routes that differ in distance and steepness with connecting pathways stemming off the main trails to allow short walks. The various designed stop overs, such as the book Café rest area, presents refreshment and rejuvenation zones for breaks in between walks. Jarak gil trail offers accessibility to Yeongcheon Market, Seodaemun Independence Park, Seodaemun Prison, Lee Jin Ah Memorial Library and Sinchon Shopping District among others.