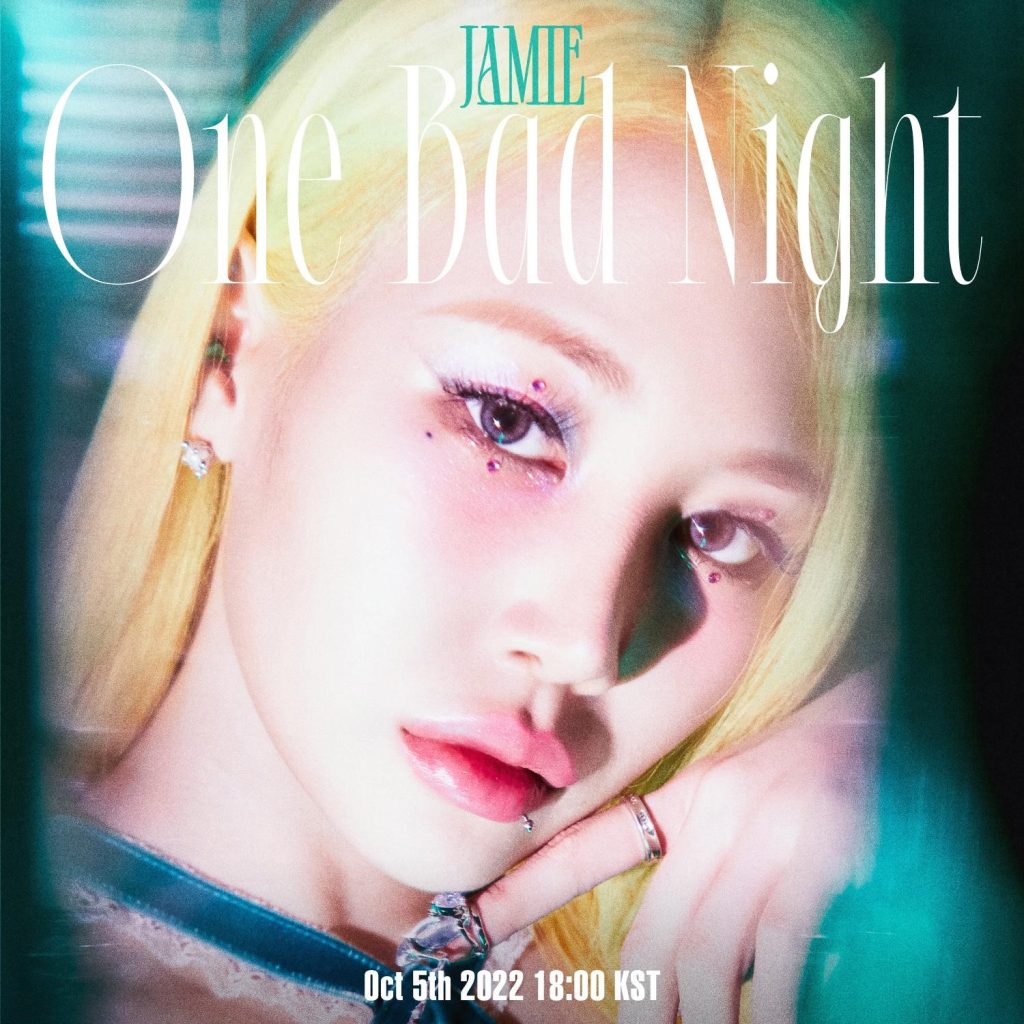 October 5, 2022,  South Korean singer and songwriter, JAMIE,  released her EP, “One Bad Night,” along with a bubbling music video for focus track “3D Woman.” This body of work marks her first EP in over four years since jiminxjamie and is available on all digital streaming platforms via Warner Music Korea.

In the focus track of the EP, “3D Woman,” JAMIE’s strong vocals are layered over a trap infused beat to deliver an unforgettable audio-sensory moment.  JAMIE has taken off her girl-next-door persona of the past and emerged as a much more edgy and mature woman for this track, with lyrics like, “They watch me when I’m walking but they listen when I’m talking.”  She’s an empowered woman who knows herself and gets what she wants, and this catchy hook and rhythm are a power move that will have you singing and dancing along to her beat.

Right out the gate, JAMIE throws us into the club with a contagious first track, “GIRLS.” With a heavy and consistent bass pounding away, this opening number sets the tone for the entire EP: “Girls just want to have fun. Girls just want to get drunk.” With steady choruses and a spirited verse with cadence and flow that perfectly match the beat, “GIRLS” is an exciting track perfect for a night that has barely begun, with fun that’ll never seem to end.

The third track continues this lively, party energy with “In My Bag.” What immediately jumps out from this track is the extremely rhythmic beat. By taking the tempo down a notch, JAMIE’s carefree lyrics and spunky, almost aggressive delivery give off the perfect attitude of a woman who doesn’t have time to care tonight. She’s got her bag, and whether or not you have yours isn’t her problem.

Track four is a turning point in the EP, and although softer and slower than the first three tracks, “Bedtime Story” still brings its own unique vibe and energy. This track takes on a more R&B mood, allowing JAMIE’s impressive vocals to really shine through. Featured artist, GEMINI’s buttery verse is the cherry on top to this groovier, late-night ride. Overall, we get a subtle, layered bass line that meshes with JAMIE’s captivating singing and smooth lyrics to capture the yearning we all feel for that special someone.

The EP ends on a much more solemn note with its track “Honesty.” The soft piano and guitar instrumentals paired with JAMIE’s beautiful vocal performance create a sobering wakeup call after the alcoholic bender that was the rest of this EP. Despite the raw emotional depth this track centralizes on, it serves as a comforting end to “One Bad Night.” Providing a much needed (and deserved) sense of closure, this final track fully showcases JAMIE’s maturity and range as an artist.

Paired with the EP is a psychedelic music video for its title track “3D Woman.” The scene begins with pulling up to an exclusive warehouse-turned-nightclub and are thrown into a picture of debauchery: bleached blondes, leather, pole-dancing, drinks, and heavy, heavy jewelry. One simply can’t help but stare at this hedonistic scene where good girls turn bad, and boys are seduced and tossed aside. You might get a kiss, you might not, but JAMIE won’t kiss and tell, that’s for certain.

As a globally recognized artist, JAMIE has been releasing her handful of hit songs over the last few years, and she’s grown into one of the most featured artists hailing from Korea. In early 2021, JAMIE was included in the remix of American hip-hop artists Saweetie and Doja Cat’s “Best Friend” alongside South Korean-Japanese rapper CHANMINA, garnering over 13 million plays on Spotify. Other notable global collaborations include “Family“ by David Guetta, Ty Dolla $ign and A Boogie Wit da Hoodie, and Numbers with CHANGMO which have all dominated the charts on its release. JAMIE has built an unparalleled repertoire, showcasing her chameleonic musical abilities and maturity in EPs like the coming-of-age “19 to 20”, the genre-hopping “jiminxjamie“ and the soon-to-be-released new body of work is destined to be a stand out once again. With buoyant, charismatic, mischievous charms, and inimitable vocal talent, which can be seen in her first English single “Pity Party”. The critically-acclaimed singer-songwriter continues to enchant her growing international fanbase (under Warner Music Korea), as she currently boasts 1.6 million followers on Instagram and millions of streams on multiple platforms. 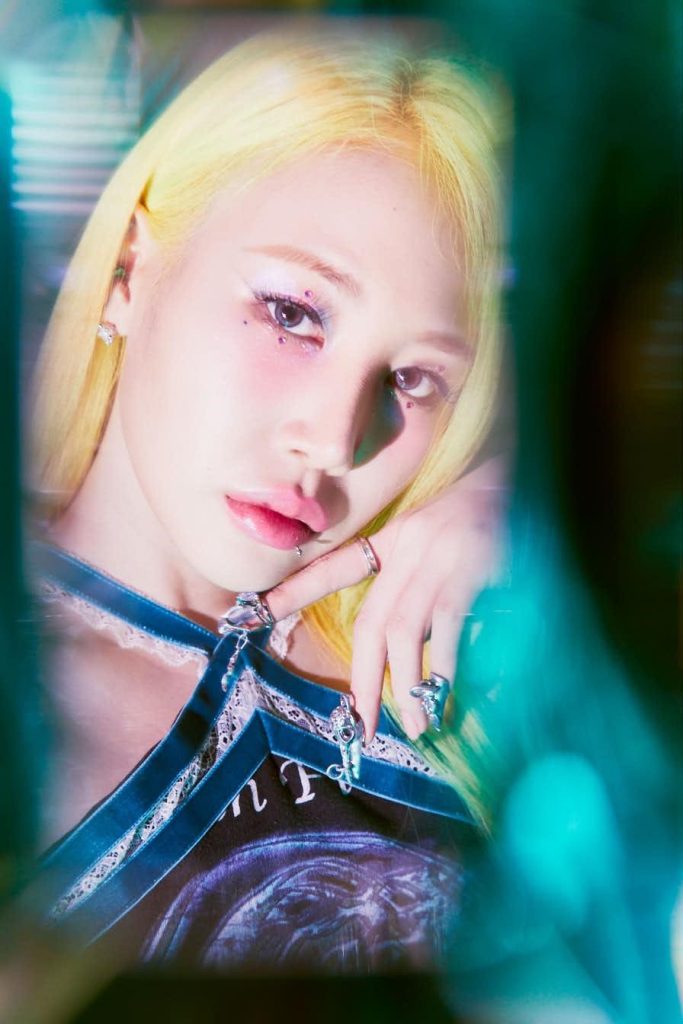 JAMIE, also known as Park Jimin, is a multi-faceted South Korean singer and songwriter. She rose to fame at a young age of 14 through winning the first season of the South Korean talent survival show “K-Pop Star” in 2011, and became a member of the K-Pop duo 15&. In addition to her activities in the vocal duo, JAMIE also released two well-received solo extended plays, 19 to 20 and jiminxjamie in 2016 and 2018, respectively. With her vibrant and playful personalities, JAMIE has further found success in the hosting world as she has won a place in the heart of K-Pop fans all around the world through her role as the MC on the long-running idol variety show, After School Club. In August 2019, JAMIE signed to Warner Music Korea as the first Korean artist to join the roster, where she continues to share more of her music and stories through her stunningly powerful vocal performances. She’s since then released a plethora of global music hit collaborations which only cements her reign in the K-Pop genre.