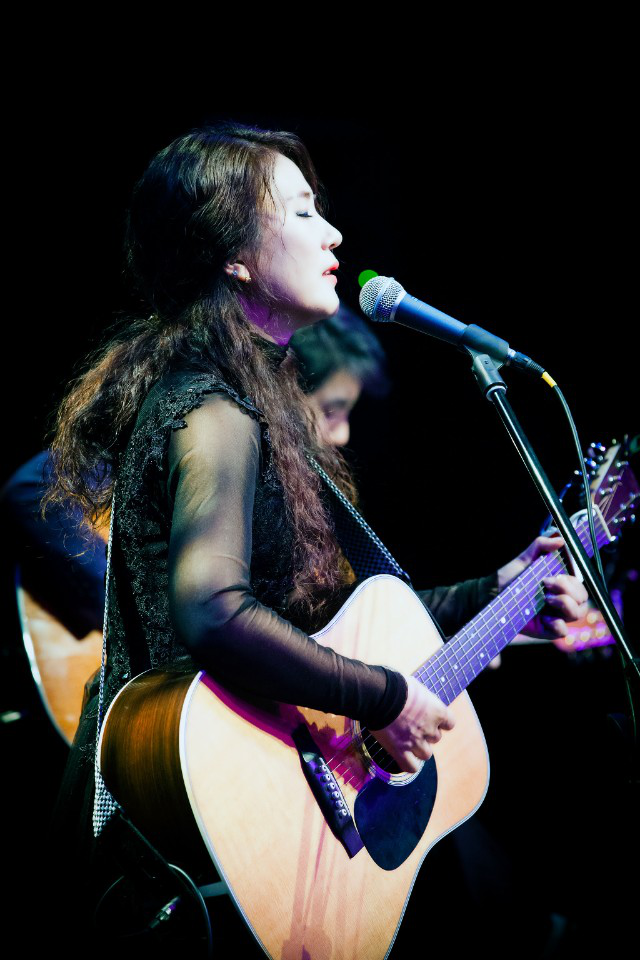 Thank you very much for taking the time out for a KCrush interview. Please briefly introduce yourself to our readers.

Hello, I am a singer called Lee Laa Hee. It’s slightly embarrassing to say this myself, but since I cover so many different kinds of songs live, my fans call me the queen or goddess of live performances. However, I am just a singer who still has so much more to sing and have so many venues where I want to perform at.

Singing is not a job for me, but it is what motivates me to live. I’ve always considered music same as breathing, and I crave to becomes a songster who is able to touch people’s hearts.

I’ve performed over five thousand times so far, and I perform live via YouTube each week, on Wednesdays and Saturdays. It brings me so much happiness to sing and I love communicating with the fans. That is why I do my best to make more time and space to sing to more audience.

Have you always wanted to be a singer? How did you choose your career as a singer?

I’m told that I was into singing since I could talk, at age 3. I recall that I’ve always wanted to be a singer, and in life, I’ve always regarded being a singer my fate.

As I got into middle school and joined the church choir, I became more intimate with music. I naturally got to know how to vocalize and breathe, as I started learning songs more in depth. Around this time, I made up my mind firmly to take up singing as a career instead of just dreaming about being one.

I later competed in singing contests, after being advised by one of my seniors to enter, and I actually got to win. At age 20, I was given the opportunity to sing live in front of an audience and thus began my life as a professional singer. I can never forget the butterflies I got from my first performance.

You cover a lot of genres of music but which genre are you the most comfortable singing?

I sing what the fans request, so I cover many genres of music but what I initially wished to sing is rock ballad that has a lot of rock infused. I started singing since I was attracted by the pleading, rock sound. My husky voice match well with it too.

Which color would you compare your voice and musical sound to?

It would be hard to compare or express my sound to just one color. This might also indicate that my vocal characteristics are not that clearly defined, however, if I had to choose a color, it would be rainbow colors.

At times, my voice sound passionately red, and at times cloudy like it is on a cloudy day, while soft and yellowy like the shade of cheese. On days when emotions get strong, it seems like black – making its way through a dark tunnel.

What do you do to look after your voice?

I normally sing about 20 songs per performance. I don’t know if you’d believe me, but on some days, I sing up to 70 songs a performance.

Unless you’re breathing through your abs, you can’t sing for long due to straining your vocal cord. The most important thing to remember when protecting your voice is to breathe and vocalize properly. When the two are done properly, the more sound you make, the vocal cord will adjust to it, regardless of the state of your condition. So, rather than looking after my voice in a special way, I think that my vocal cord is protected through right way of breathing and vocalizing.

I also make the effort to have to keep my throat covered and warm, drink warm water and keep to other good habits in order to protect the neck area. I normally do a lot of performances while standing up, so I eat well and keep fit by doing yoga. I take regular walks with my pet dog and maintain a good mental health as well. 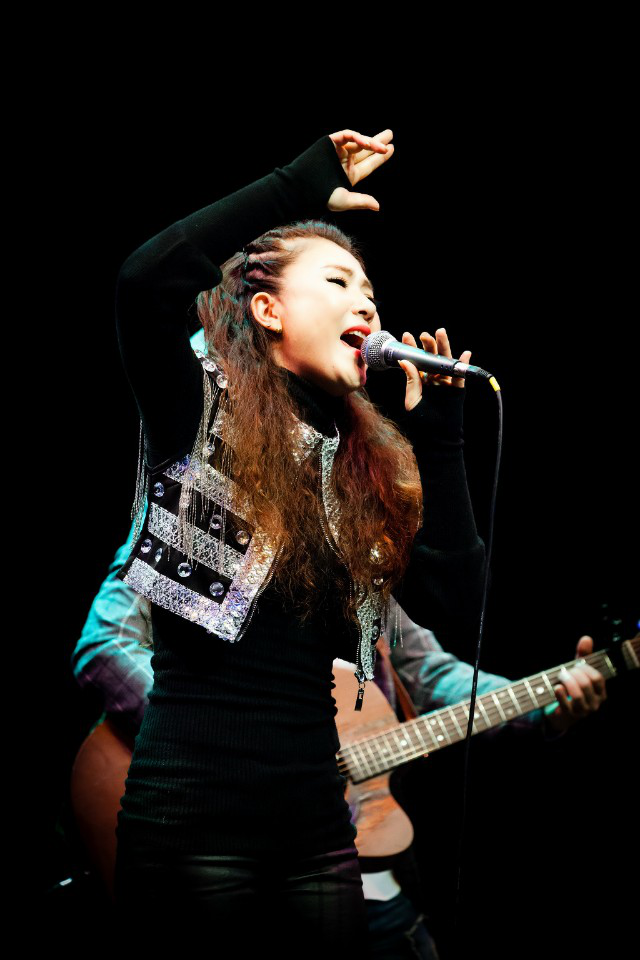 What are your hobbies and interests?

I really love to cook. I cook Korean cuisine, and currently learning Vietnamese and Chinese cooking as well. It’s such a nice feeling to give out traditional Korean dishes to the people around me and share delicious food with precious people. Whenever there’s a meeting where I meet up with my fans, I provide them with tteokguk or jjigae. At times, I prepare food enough for 100 people or more.

I also love going on trips when I have the time. At night, I leave the city to a remote rural countryside to sit and look at the stars. I reflect back on the life I’ve led so far or dream away about performing at a stadium, in front of multitudes of

I love cuisines related to crabs the most. Crab-jjim, Soy Sauce Marinated Crab and other dishes with crabs in… In Korea, we eat seaweed soup on our birthday, but I have a crab soup instead, because I love crabs so much.

Instead of having manufactured drinks, I enjoy drinking juice made from the fruit in time of the season. Because it’s not that easy to find such quality juices, I make my own to consume. Recently, I’ve made citron fruit preserves by marinating the fruit in sugar. I also made bellflower preserves, which is supposed to be good for the throat, and I add it with water to drink. I also bought passion fruits and made it into an extract.

Which artist or musician do you respect the most?

I respect the now-deceased Whitney Houston the most. She was a whole package – from her vocalizing, mouthing, charisma that took over the whole stage… and everything besides. Her life was full of ups and downs, which has a lot of similarities to my life, so it made me more relatable to her. After losing her voice, Whitney unsuccessfully made a comeback and later lost her dear life. It saddens me each time I think of how she lived.

I didn’t lead a very smooth life either. I had a difficult family background, had to get two surgeries on my vocal cords, was extremely depressed due to certain people and all these things in my life play a part emotionally through my singing.

Out of Korean singers, I respect Patti Kim sunbaenim the most. Although she’s in her 80s, she manages to take care of herself/her voice so well, and emanates so much charisma on stage. She’s now retired but her energetic performances still stays clearly in my mind.

What kind of songs do you listen to the most frequently these days?

I don’t really listen to current music or albums, but mostly focus on listening to a lot of old pop songs because I love the old music for the sentimental vibes that they have. There are so many songs that I never knew before and so many of them that I want to sing.

So, I tend to look up older music than the contemporary, these days. I have a thousand Korean pop covers uploaded on my YouTube channel but not that many English pop songs, so I plan to upload more of these in the future.

What do you think you will be doing 15 years from now?

I have my own ambitions as a singer but most of all, my goal in life is to regard my music as a refuge and a way of enjoyment for myself. If it becomes a job or career, my life will then start to diminish, in my opinion. I believe that I need to be happy in order to deliver happiness to other people. With that in mind, I want to be around people who enjoy listening to my singing.

I also love stars, wind, flowers, music and puppies. I think, in 15 years-time, I would have settled down in a house in a rural area. As long as YouTube still exists, I will be uploading videos of my singing from the countryside, lol.

Share with us your future plans and hopes. Please add something for the fans too.

I am preparing to put together an album of songs that I’ve released in the past, and the songs that I have not yet released before. I’ve come to know that there are people out there who like to hear me sing but can’t make it to the venues where I perform, for various reasons.

My album will include tracks that I’ve written myself and the album is scheduled to be released next year, in March. After that, I plan to hold concerts and promote my own songs that I wrote, not just covers. If given the chance, I would also love to hold performances abroad as well.

If there’s even one person who is consoled or comforted through my music, I won’t stop so that my music can shine for them, like it did for me.