KNK (Hangul: 크나큰) is a five-member Korean boy band signed under YNB Entertainment. The band consists of five members with the names, Youjin, Seungjun, Inseong, Jihun and Heejun, listed in the order of their age.

As to the group’s name, KNK stands for “K-pop kNocK” indicates that the group will be “Knocking on the door of K-pop.”

An interesting fact is that all the members of KNK were once trainees from different entertainment companies, prior to joining their current management company. Youjin was formerly one of the original B.A.P members, Seungjun used to train with BTS, Inseong was a trainee at FNC Entertainment while Jihun and Heejun used to be trainees at Nega Entertainment.

KNK made their official debut on February 29th 2016 and released their first single “Knock” on March 3rd 2016.

YNB Entertainment opened the V app channel for KNK, so from the start of February KNK members have been uploading real-time broadcast nearly every day with their rehearsals and video updates for their followers.

On March 1st 2016, KNK made their debut on The Show and their single and music video for “Knock” was released on March 3rd. A month later, KNK had their first schedule abroad by performing “Knock” at the 20th China Music Awards in Macau.

On May 22nd of 2016, it was announced that KNK would be back with their first mini-album, “Awake” and the music video for title track “Back Again” was released on June 2nd 2016.

Thank you for taking a KCRUSH interview. Would you introduce yourselves to our readers please?

Youjin: Hello, I am Youjin who is the eldest member of KNK and I’m the vocalist of this group.

Seungjun: This is Seungjun Park and I am the tallest member from KNK.

Inseong: Hello, my name is Inseong Jung and I’m a vocalist from KNK.

Jihun: This is Jihun Kim and I’m the leader of KNK who is also in charge of the dance and choreography.

Heejun: Hello, everyone! This is KNK’s maknae, Heehun Oh who is the band’s guitarist and vocalist.

What do you think has changed the most for you after the debut?

Seungjun: Because we spent a considerable time as trainees, it is kind of hard for us to realize that we finally hit our debut as a group. I think that is because we spend more days practicing after we went on air for our first performance.

If anything has changed for us after the debut is probably that we are now usually in make-up and our hair is done. Ha ha.

Inseong: Our company is located in Garosu-gil and there has been times when people would recognize us and some of the tourists from abroad as well.

Jihun: I think our mindset has vastly changed. We always dreamt of the day we made our debut and since that dream got fulfilled, we have now set another goal. The goal is not to lose our mindset we have had from the start.

What kind of music are you into and who are your favorite musicians/artists?

Youjin: I am very much into Hip Hop music and culture. I usually like to wear Hip Hop clothes. The artist that I like the most is Jay Park. His music is great and his manners and presence on stage are also cool as well.

Seungjun: I have a wide spectrum for music and enjoy all kinds of music regardless of the genre. I listen to ballads, dance, rock, original soundtracks and etc. The bands that I particularly like are BEAST and 2PM.

Inseong: I have a lot of respect for Xia Junsu sunbaenim because he is capable of doing perfect live performances to the dance moves.

Jihun: I very much like the artist, Joonil Jung sunbaenim. I respect him so much that I checked out all his live performances on the web. I want to take after him.

Heejun: I respect Jin-seop Byun sunbaenim and the deceased Kwang-seok Kim sunbaenim. Since I play the guitar, I naturally got myself into listening to music from the 70s and 80s era. The above mentioned artists offer so much I can learn from. 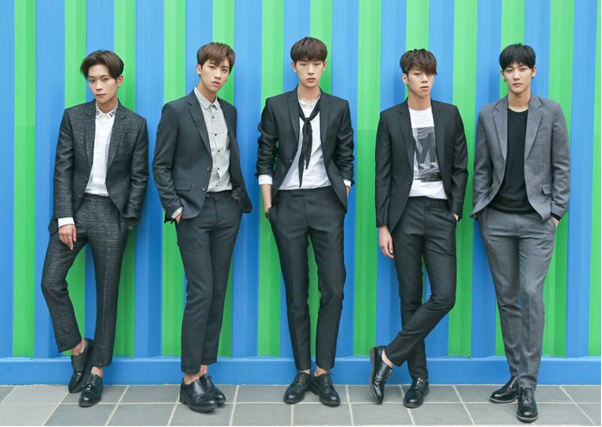 Which song from the new album do you feel the most attached to?

Youjin: I am very attached to the song, “I Will Try” from the new album mostly because the pitch that is required for the song is extremely high; a lot of hard work was needed to complete the recording. I find the song special probably because the process of recording the song was extra difficult for me.

Seungjun: I really like the song called, “Gone” which is kind of like an intro for the title track, “Back Again” and it’s about 1 minute and a half shorter in length.

I think that track is really great so in the future I’d love to make it into a complete song for you guys to listen to.

Inseong: For me, the song, “Confession” is the one that I feel the most attached to. This song was written by our composer who asked us to sing it at his wedding.

The KNK members sang it for the first time at his wedding; it was also the first time we ever sang at a wedding ceremony so the song stays in my mind the most.

Jihun: I’d recommend you to listen to a track called, “How Are You These Days” because it’s a great song and I think it showcases a different side to KNK.

Heejun: I would also say “Confession” is my favorite. The lyrics are so pretty and it shows off the KNK members’ ability to sing, I love it.

Where do you want to go for vacation this summer?

Jihun: The five members of KNK would all love to go to Jeju Island together and have a blast at the beach.

Youjin: I am currently working hard on my composition and writing lyrics. I think by next year, I would be able to write songs for our album. Hope you guys look forward to it as much as I am.

Seungjun: I’m in charge of the rapping in the group so I am working on my lyrics and rapping skills.

Inseong: I play the piano/keyboard and have plans to work hard so I would soon be able to show you my skills on the piano.

Heejun: I think my special skills are guitar playing. I can play both the electronic and the acoustic guitar.

Please let us know who your role models are and state the reason as well.

Our role models are the members of the K-pop group, “god” because they are loved by so many people, all the singles they released became great hits that got the whole nation singing. The members of KNK would also like to follow their footsteps and become artists loved by many.

What is the most precious belonging that you have?

Youjin: My mobile phone. I usually contact my parents at least few times a day so it’s something that I really can’t do without.

Seungjun: The presents and letters I received from our fans are incredibly precious to me. The things I got from the fans all fill my room.

Inseong: My hobbies are collecting legos. The lego blocks I own are practically my treasure.

Jihun: It’s the mobile phone for me as well; I have it with me at all times in order to monitor the dance moves and whatever else that needs recording so it’s very important to me.

Heejun: The recently purchased acoustic guitar is my most treasured item I own.

What kind of a person is your ideal?

Youjin: My ideal is the Korean actress, Jimin Hahn.

Seungjun: Someone who takes care of me well would be my ideal person.

Inseong: A person who is able to sing well with me is my ideal.

Jihun: My ideal would be a person is someone who can share my hobbies with me.

What do you think you would be doing if you were not a part of KNK? Was becoming a singer your childhood dream?

Youjin: I assume I would be doing something in the entertainment business.

Seungjun: I think I’d have been a college student if I was not a member of KNK.

Inseong: I really loved to sing since a young age, so I would be training to become a singer.

Jihun: I also think I would have been a student as well.

Heejun: I would have been a soccer player.

Would you recommend any films, books or songs to our readers?

Youjin: The movie called, “Identity” and the book, “You Become an Adult After Being Shaken a Thousand Times.” I would recommend Chris Brown’s song “Little More” and Brown Eyed Soul’s “Home.”

Seungjun: The movies that I like are the “Harry Potter” series, “The Intern” and “The Way Home.” The books I like to recommend are “The Kid Who Carries Your Bag” and novels by Tolstoy.

Lukas Graham’s “You’re Not There”, One Republic’s – “Good Life”, Taylor Swift’s “We Are Never Ever Better Getting Back Together.”

Inseong: I enjoy watching all the “Marvel” series and “Knights of the Round Table.”

The books I’d recommend is “My Brilliant Life” and the songs “Love Is Like a Snowflower” and “Yesterday” by Xia Junsu.

The song I recommend is “To You Again” by Jin-seop Byun and “Home” by Chris Daughtry.

Tell us what plans and goals KNK has for this year.

Jihun: Our goal for this year is to be on stage at the end of the year award shows and win the award for the Best Rookie Group. KNK will be working extremely hard until then so please stay with us! Thank you.

9 responses to “KCRUSH Interview with KNK”