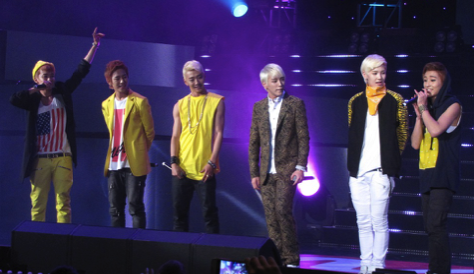 If you had an opportunity to create a charity for your favorite celebrity, would you? What would you do?   Who would you help What would drive you to want to start a charity?

Over the years, there have been fandoms who’ve done just that, and we read about the good deeds of fans who come together to create forests in the name of their favorite celebrities or donate money to a favorite cause.   Often, these actions are done by domestic fans and fans dotted across Asia.   The United States are often left out.

Enter Earth Needs You (ENU), a B.A.P charity started by Dana Crone.   Based in Pittsburgh, Pennsylvania, ENU has hopes of going global.   According to their website, they are “a charity-based (non-profit) ‘fan’ group of the Korean music group, B.A.P.    The goals of [the] organization follow the vision of B.A.P’s leader, Bang Yongguk: Making the world a better place by helping to improve the lives of children around the world.”

Currently, ENU is looking for volunteers within seven hours of the Pittsburgh area to help develop the charity for advertising, web and social media design, and assistant directors, so you can help build the charity and help get its vision off the ground!

Dana Crone took the time to respond to some questions regarding ENU, why she plans on developing the foundation, and what plans are in place for accomplishing its goals.

It seems clear you’re a B.A.P fan.  What made you become a fan and why?

DC:  I am a fan of good music first and foremost, and I feel that whatever B.A.P seems to produce is of a high standard musically and lyrically.   I find each member to be individually talented and, while some are stronger in certain areas than others, their music highlights their abilities as singers and performers.  They also put on a great live performance.   I have seen them twice now.

What about their mission connected to you and why?

DC: I think what really struck me the most was the interview where Bang Yongguk explained what he would do with $100,000 (support children & their education basically).  I was already a fan at that point, but I gained a lot of respect for him and the group at that moment; also, other interviews where he [Bang Yongguk] would explain how he and the other members save or cut down on excessive spending to be able to support charity.   They are still establishing themselves as artists, yet are already thinking of ways to help others.   It’s quite amazing to me.   I am a teacher of students with special needs so their efforts really touch my heart.

What made you decide to start a charity in B.A.P’s name?

DC: I have always wanted to give back to others, especially children in need, but never had an outlet to do so.   I am not a religious person nor do I have any connection to persons supporting a cause, and I think there are other people like me who also want to help, but don’t know how.   B.A.P’s concert message this year was that earth needed us, so I thought to myself, why not?   B.A.P called and we will answer.

What goals do you have for ENU, and how do you plan on fulfilling B.A.P’s mission through ENU?

DC: ENU’s focus is service as opposed to straight donations to a cause.   While we will have donation drives and accept donations, I feel the fansites already do a great job in those areas.   Our job is to help people. We recently had a meeting where we outlined goals both short term and long-term.   We have a lot of ideas, but something that we will be working on soon is creating a safe place for children and teens with disabilities to chat (online) with kids without disabilities about everyday kid stuff.   Even with the push for inclusion in US and Canadian schools, this population is often very isolated from their peers.   Likewise, kids without disabilities don’t know how to interact with this population and it results in a lot of misconceptions that carry on into adulthood.  Currently, we are working out logistics and investigating the legal side of this, but this will be our first major project.

You mention on the B.A.P forum that there are plans for ENU to expand and go international. What plans do you have for ENU during the expansion process?

For people looking to join and help your organization, what would you like them to bring to the table in terms of ideas for growth, planning, and reaching out to different communities?

Motivation and commitment is what we need; leadership would be an added bonus as we are in need of leaders.   For those who think they are too inexperienced:  Most of us are very inexperienced and are learning the roles and rules of a nonprofit as we go.   Learn with us and make a difference!

There are multiple B.A.P fan clubs who are planning different “good deed” projects in honor of B.A.P’s 1000th day anniversary Oct. 22.   Do you have any plans to do anything on this date?   Is so, what do you have planned?

For the anniversary event, we ask fans to reach out to their favorite fansite and make a donation or submit a good deed (like at BYS*).   We feel like that event like this is best serviced by fansites.  I recommend BYS (I personally have some “good deeds” to submit), but there are a few other fansites/fangroups out there doing good as well.

[The charity may no longer exist. Just a reprinting] .