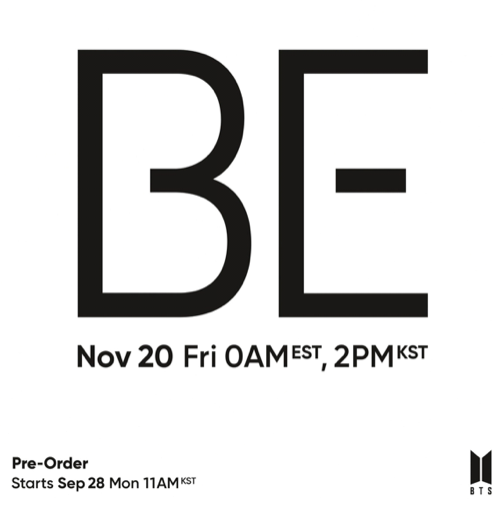 BTS’s new album “BE” will be released on November 20th, as announced by Big Hit Entertainment via the group’s online fan community BTS Weverse. “BE” will be BTS’ second album of 2020 –  following MAP OF THE SOUL : 7 – the fourth studio album from the group.

“This album is made more special by direct involvement from BTS in not only the music, but from the concept and composition to design. You will discover throughout the album the thoughts, emotions and deepest reflections of BTS while experiencing an even richer musical spectrum.” The announcement said. “BE” album is stated to be a special record by BTS members, but the announcement did not elaborate on other details.

From this Monday to Friday, the super group will appear on “The Tonight Show Starring Jimmy Fallon” for a weeklong special of “BTS Week.”

Pre-orders of “BE” will start at 11 a.m. Monday, according to Big Hit Entertainment.