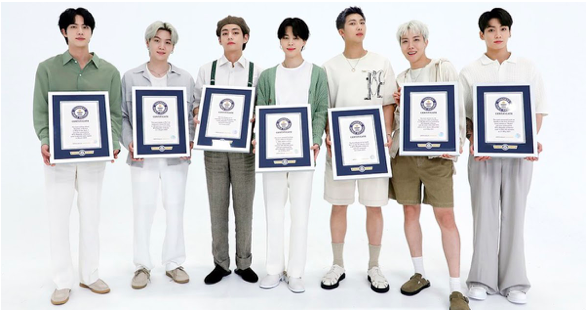 Global superstar band BTS has been crowned Guinness World Records 2022 Hall of Famers with a list of 23 records across music and social media.

Some of these very impressive records celebrated by Guinness are:

Most streamed group on Spotify (16.3 billion)

Most viewers for the premiere of a music video on YouTube (for “Butter,”3.9 million, which replaced their previous record for “Dynamite”)

Most weeks at No. 1 on Billboard’s digital song sales chart (“Dynamite,” 18 weeks)

Most streamed track on Spotify in first 24 hours (“Butter”)

Most Nickelodeon Kids Choice awards won by a music group (5) 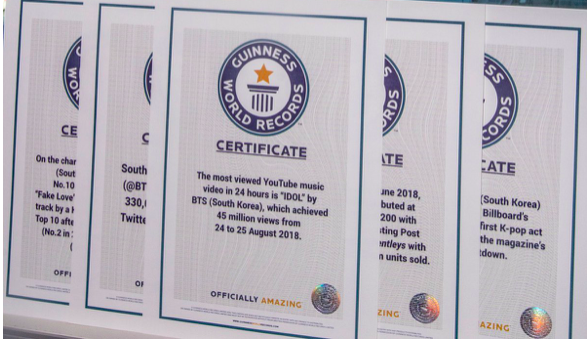 Today, Bangtan boys are the most streamed group on Spotify (breaking Coldplay’s record) and the most followed music group on Instagram.

As for Twitter, BTS’ official accounts boast the most Twitter engagements for a music group – a record that they have broken four times!

The release of their No.1 single, “Butter”, single-handedly broke five records, most viewers for the premiere of a music video on YouTube and most streamed track on Spotify in the first 24 hours. And, these are just a few of the records held by the K-pop phenomenon since the last couple of years.

Jin, Suga, J-Hope, RM, Jimin, V and Jungkook have left a massive mark in the cultural landscape, breaking free from the limitations of their home market and language. Through their song lyrics and public speeches, they raise awareness for self-love, self-acceptance and mental health while partnering up with UNICEF for their Love Myself campaign against children/teen abuse.

Guinness World Records stated that “As for their ability to have fun, amaze and communicate through music and dance moves, as well as their dedication for breaking records… that is certainly what marks BTS as the perfect fit for our Hall of Fame 2022!”

The boys will also receive a two-page spread in the upcoming printed Guinness World Records 2022 book in a detail-packed recap of all BTS’ major hits, records and achievements

BTS and American rapper Megan Thee Stallion recently dropped “Butter” remix and are also set to appear on a special episode of YouTube Originals’ weekly music series “Released” on Thursday, September 9 at 11:45 PM ET, which will lead directly into the premiere of “BTS ‘Permission to Dance’ MV (Shorts Challenge ver.)” on September 10 at Midnight ET. They will be joined by Coldplay’s Chris Martin, for a conversation on what inspired the Permission to Dance challenge and etc.