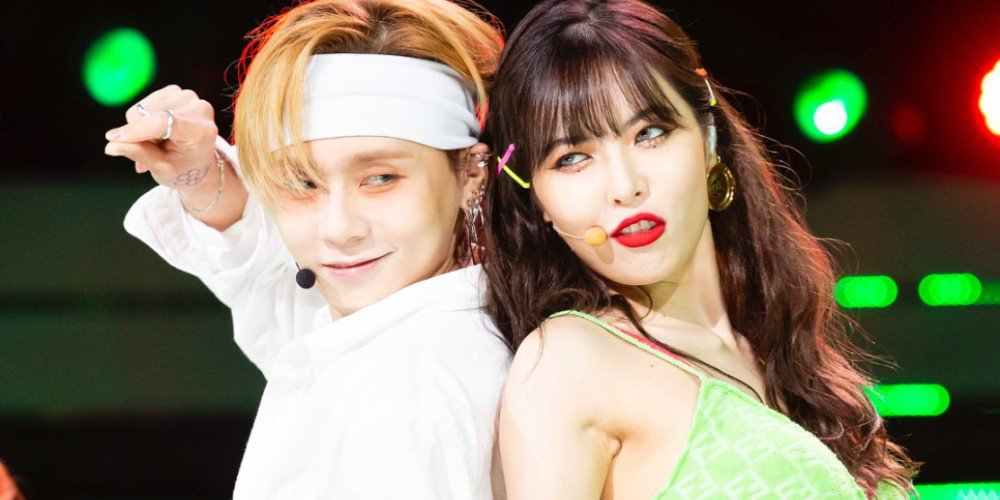 On September 14, 2018, Cube Entertainment CEO, Shin Dae-Nam, announced that HyunA and E’Dawn will stay with the company for now. However, a board meeting will be help to discuss the idols’ futures. The retraction appears to have been made following Cube’s nearly 7 percent stock-drop on September 13, 2018 after it was announced the pair were ousted from the company.

In a stunning move, Cube Entertainment announced on September 13, 2018 that long-time idol, HyunA, and Pentagon member E’Dawn (Kim Hyo-Jung) have been kicked out of the company more than a month after the pair announced they’ve been dating for two years.

Cube Entertainment released a statement following the news the two stars have been ousted.

This is Cube Entertainment.

Cube Entertainment has officially decided to remove our artists HyunA and E’Dawn from the label.

We have put in our best efforts in working with our label artists in artist management through loyalty and trust in our relationship.

After numerous discussions, it is with great pain that we have come to the conclusion that it will prove difficult for us to rebuild the broken loyalty and trust between these two artists, HyunA and E’Dawn; as a result, we have made the decision to force them out from our label.

We sincerely thank fans who have been with the two artists all this time.

E’Dawn debuted in Pentagon in 2016. E’Dawn is best known as one of Pentagon’s singer-songwriters; he is credited as a co-writer in Pentagon’s new single “Naughty Boy,” which was released September 10, 2018.

The pair were also in the unit Triple H together.

In August, E’Dawn and HyunA confirmed they were dating after rumors circulated online the two were together. The pair came forward with their relationship because they wanted to be honest with their fans.

Weeks after the dating news, E’Dawn shared a message on Pentagon’s fan café.

Hello everyone, this is E’Dawn. I’m so sorry to greet you so suddenly, and so late, through this post.

I truly wanted to stand in front of you fans, to see you and to talk to you face to face, at our fanclub opening ceremony in August with my members, since we prepared hard with thankful and fluttering hearts, but none of that came true due to circumstances.

Afterward, I felt apologetic toward fans who must have been confused because even though I said I wanted to show you my truthful side confidently, I disappeared without warning; so I am writing in the hopes that even just a little bit of my apologetic feeling and my whereabouts will touch the fans who are simply waiting for me with troubled hearts, even though it’s so late and I’m not sure if this will reach you.

Before all of this happened, I talked over what was the right or wrong decision with my members so many times, and up until the final decision, I was very scared and worried. However, because I chose it, I felt that rather than telling an even bigger lie later on, I had to be honest to you all.

I’m disappointed that I will not be able to keep my promise of greeting you on stage as soon as possible with my truthful self through these upcoming promotions.

Still, in one sense, I do feel relieved that I’ll be able to join the members with the music that we all worked on together, at least.

Even though I won’t be together with you in person, I will cheer for the album we created with honesty and for my members alongside the fans.

I was given a long period of time in the form of a month. At first, I suspected that you would hate me, and worried that maybe some of you were hurt, and I had a time of reflecting on all kinds of thoughts.

It’s sad that after all this time, I can only relay my honest thoughts through writing.

I’m not sure how and in what format we’ll be able to meet again next time, but until then, please don’t be sick, and I’ll do well while praying that only good things will happen to you.

I’m so sorry, and thank you, and I miss you.

Following the announcement of their relationship, E’Dawn’s promotions with Pentagon where halted, and several of HyunA’s events were canceled due to “internal circumstances.”

Those internal circumstances were due to Cube Entertainment working on nullifying E’Dawn and HyunA’s contracts because they “broke the company’s trust” by dating.

Hopefully, HyunA and E’Dawn will be snatched up by a company that actually cares about their artists and protects them instead of tossing them away for having human needs and emotions.

That is a rant for another article.


*Update: After releasing their initial statement, Cube Entertainment backtracked a little by stating, “”We’re simply negotiating HyunA and E’Dawn leaving the label, but it’s not been confirmed. We’ll be discussing it more.”