B.A.P Awaken Awareness with “Wake Me Up”

On March 7, 2017, B.A.P and their leader Bang Yongguk, who has been on hiatus for personal health reasons, returned with “Wake Me Up.” Since its release, feedback for the track has been overwhelmingly positive as the song and the Rose single album continues to trend on global iTunes charts. In the United States, it was even ahead of Beyoncé and Adele on the iTunes world album chart for some time. On Facebook and Twitter, the praise continues with fans and non-fans of the charismatic group encouraging everyone else to watch the video. Twenty-four hours following the release, #BAP_WakeMeUp continued to trend on different Twitter feeds globally, and a week after, it continues to trend high on Naver’s top 100.

By far, “Wake Me Up” is one of B.A.P’s best tracks and MVs, and this is with personal bias aside. The composition is memorable and different, causing it to stand out amidst the current K-Pop release lineup. The music is fresh while sounding like it has an old soul, while the vocals show B.A.P’s enhanced growth. The haunting “wake me up” chorus just grabs the ear with intensity. “Wake Me Up” features some of the best vocals in B.A.P’s discography with Himchan, Daehyun, Youngjae, and Jongup showing greater development and more stability. In terms of sound, “Wake Me Up” bursts forth with guns blazing. 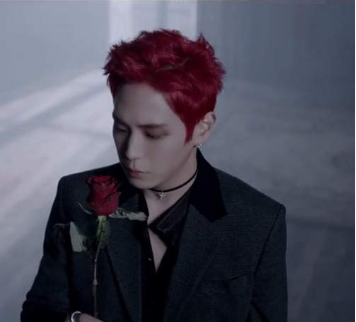 Looking at the track lyrically, it’s impossible to not feel something when listening to the song. The theme of “waking up” plays on the phrase “get woke” or, in layman’s terms, gain awareness. The first verse of “Wake Me Up” hints at this meaning with “I’m awakening a different me inside, the faint light that was turned off. Wake me up. Open my eyes.” The way the lyrics are structured, they can pertain to societal issues, mental health awareness, and strengthening social awareness. Like a rose, the song has many layers that make it have the depth it has; all-the-while, it remains relevant and relatable to a global audience.

Each verse can relate to someone who is going through something negative. For example, in verses nine and ten—Himchan’s solo part—the lines come across as someone with an emotional or mental health disorder speaking about “Putting back together the messy puzzle pieces in this game… Questions thrown at me, without even a question mark.” “Putting the pieces back together” is a common phrase used for someone who may experience emotional distress, confusion, or a breakdown as he or she tries to get a life back on track. Meanwhile, the questions being thrown without question marks refers to how people are quick to judge and make statements without thought or consideration of how the suffering individual may feel. In verse 11 when Yongguk takes over, the lyrics call for revolution and for people to become aware. The lyrics suggest that people need to discover a world outside of what the media and governing bodies feed us in order to see how people actual suffer and feel. There is a call for action for those who are repressed to rise above and be seen. The most poignant line here is also the simplest: “FREE, LOVE, REAL, ILL.” This line tells listeners that no matter their background, identity, or stigma, they need to rise above and be heard.

The fact that each line can be taken and applied to different situations— including our own issues here in the US with racial and gender inequity, government and media corruption, and immigration and human rights— makes the song an artful masterpiece. 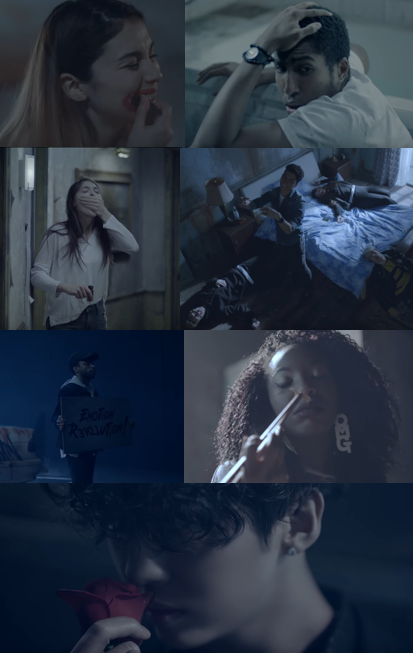 The MV strikes a chord with a wide audience, not just B.A.P fans. There are several elements to the MV that makes it a standout from its diversity to its artsy approach to social issues and stigmas.

First, diversity is strongly displayed throughout “Wake Me Up.” People of different races and genders are all portrayed as struggling with a social stigma, mental illness, or fighting for something. As many have noticed, “Wake Me Up” features minorities as human beings over thugs or criminals, which is a strong positive for this MV. This sends the message that no matter our backgrounds, we should be “awake” to each other’s suffering because everyone does have a struggle.

Second, the way mental illness and social issues are portrayed are expertly crafted and tastefully done. Within the MV, we see the following:

They, along with Yongguk— who was on hiatus due to a panic disorder—all represent an important issue neglected in society. Mental illness is often swept under the rug; there are negative stereotypes associated with being Middle Eastern; and protesting, which is prevalent today, is viewed as useless. Each person is seen suffering alone because they are invisible. 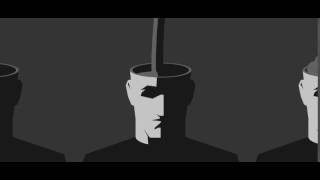 Mixed in with the scenes showing people’s struggles, there are two key elements. The first is the animation of people’s heads being filled; the second is when B.A.P appear on the TV and people suddenly take notice.

With the first animation, it appears the heads are being filled with excrement which can be interpreted two ways: People want to fill their heads with useless information to avoid dealing with real issues, or, second, the media fills people’s heads with an agenda while not addressing real issues. In either case, people’s heads are filled with content that takes away from the human element or the important issues in life.

With the second scene when B.A.P appear on the TV screen, people in the streets stop and watch. This is following how no one took notice to the man pleading for an emotion revolution. This scene is saying that people will only listen to issues if it’s through media. Given how media is everywhere—TV, film, radio, music, advertisements, cell phones, and many other forms—people do pay attention to that over what others—i.e., real flesh and blood— around them are saying and doing. It is through media that people want to act. This hints at the spread of social media activism that has been prominent the past few years.

In addition to these scenes, there are other relevant images. One includes B.A.P members with torches, which symbolizes how they’ll be a light in the darkness. There are also scenes throughout where members are featured with their eyes closed and quickly opening to symbolizing waking up, while Zelo and Yongguk are standing in front of the sun. The sun scenes symbolize full awakening and is a play on the word “rose” (the album name) because the sun has risen to signify a dawn to a new day. The time for change is here.

The rose theme plays a role throughout. For “Wake Me Up,” the roses belong to someone who has had a personal struggle starting with each B.A.P member and ending with the six individuals shown throughout the MV. The roses play on the “everyone rose has its thorn” and “where flowers bloom, so does hope” quotes. Roses are beautiful, which relates to the beauty of the human soul, but roses are thorny, which relates to how people have darkness inside of them. The rose flowers are what people see while the thorns are what’s beneath the surface. However, if tended to properly, a rose can bloom and prosper. This is what is hinted at between the dark rose scenes and the scenes later where the characters smile with their roses.

The MV is well-crafted and full of symbolism. Part of the MV’s beauty is that it can be analyzed easily to where any fan can pick up on the themes. As for as B.A.P MVs go, this is one of their most brilliant.

“Wake Me Up” is a timely, necessary song and MV. It is timely given the turmoil that exists globally, and it is timeless because the MV contains themes that won’t disappear in society. The song is also their strongest comeback since “1004,” signifying that B.A.P isn’t going anywhere any time soon. Given its global success, the track definitely hit fans hard.