With Covid travel restrictions* lifting, many of us may be feeling the nips from the travel bug reminding us that life is short, and we need to go out to see and experience the world.

Thailand is one of Southeast Asia’s major tourist attractions. According to 2021 data, over 39.8 million people toured the country in 2019 (6.7 million in 2020 while Covid restrictions were in place), making it one of the top countries visited prior to the pandemic. Before the pandemic, the numbers of foreign visitors coming to visit Thailand were trending upward before falling off due to travel restrictions. However, numbers are set to increase this year and in the coming years.

While many visit the country for the food, birding tours, inexpensive accommodations, beaches, backpacking and nature excursions, nightlife, and even plastic surgery tourism. Thailand’s culture-rich experiences have a lot to offer!

Of course, one of the best ways to see and experience Thailand is to visit the temples. The temples dotting the country have rich histories and meaning that will please any history buff or anyone interested in Thai belief systems including Buddhism and Islam. Of course, the architecture is something to behold! If you plan on visiting Thailand any time soon, these temples should be on your list! 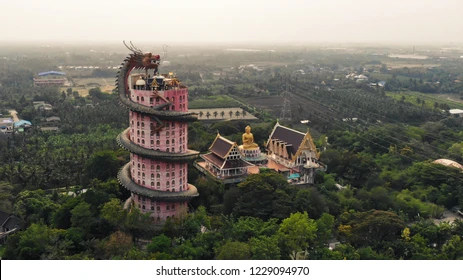 Located 40 kilometers (almost 25 miles) outside of Bangkok, the dragon protecting Wat Samphran (also known as “Rose Buddha Prayer”) looms and watches over the land, inviting visitors to come wander the gardens. The dragon, now mostly hollow, used to house a staircase, but due to deterioration, the dragon is no longer safe to climb. For the same reason, parts of the temple are closed off to the public, which might be a massive disappointment. However, photo opportunities can be found throughout the complex.

Colloquially known as the “Dragon Temple” in the West, Wat Samphran was registered in 1985 and is 80 meters (262.5 feet) tall to mark Buddha’s death at 80-years old. At the foot of the building stands places of worship, a large gold Buddha statue, and gardens that invite you to take in the peaceful location while taking in the astounding dragon. In addition to the large dragon wrapped around the pink cylinder building, several smaller dragons will be found throughout the complex, especially on and within the shrines.

Traveling through the gardens will have visitors stumbling across all kinds of animal statues and a trail made from bricks marked with handprints and footprints. There are several ponds and wells that invite guests to toss coins to receive different blessings.

While a cool attraction, Wat Samphran, which is barely a blip on tourists’ radars, has a somewhat dark history. In 2004, several of the temple’s clergy were sentenced to prison following a sexual assault scandal. Buddhist abbot Chamlong Khonsue was sentenced to 160 years in prison for 28 counts of rape, molestation, and attempted rape on the girls under the age of 15. The scandal does stain the legacy of this beautiful structure, which may make it a “must miss” on many people’s sight-seeing lists. 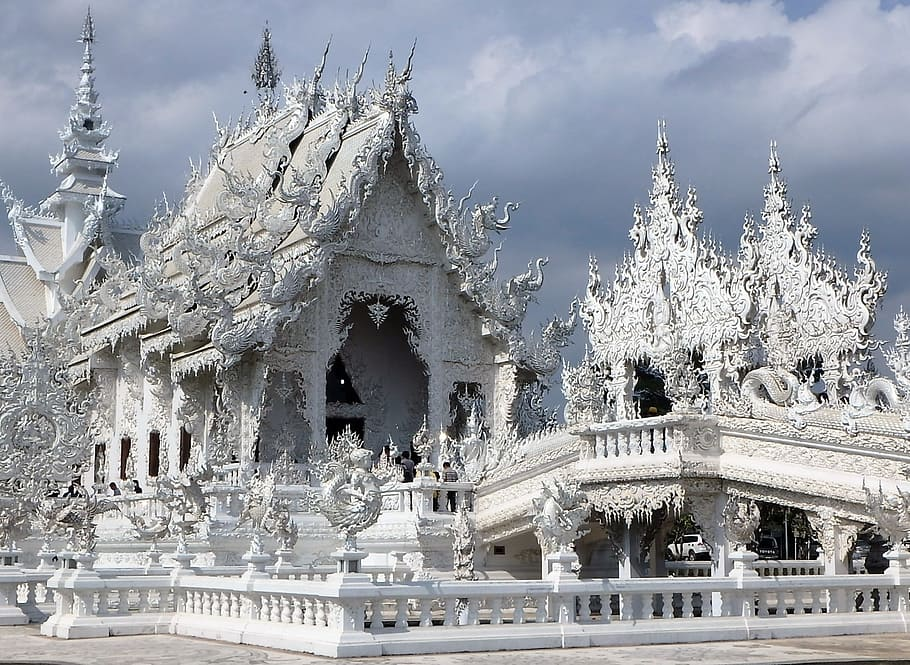 Known as the “White Temple,” Wat Rong Khun isn’t a traditional Buddhist temple! Instead, it’s a privately-owned art exhibit built in the style of a Buddhist temple.

Designed and built in 1997 by Chalermchai Kositpipat, the White Temple is a rebuild to honor the original Wat Rong Khun, which has been in a poor state since the beginning of the 20th Century. The temple features Kositpipat’s personal touches inspired by Orthodox Buddhist teachings. Kositpipat considers the White Temple to be a gift to Buddha that will grant him immortality.

The bridge of “the cycle of rebirth” leads to the main building, the ubosot, which is guarded by statuary representing Death and Rāhu, making up the Gate of Heaven. Near the building is a small lake. After crossing the bridge to get to the building, you’ll have access to an art gallery, a hall of relics, a meditation hall, and the monks’ living quarters.

The ubosot is all white and contains mirrors around the exterior. The buildings feature the three-tiered roof common in Thai architecture, and it’s decorated in nāga serpents. Inside the ubosot, the white shades and traditional appearances from the outside fade to fiery oranges and décor featuring Western pop culture icons including the Matrix’s Neo and pop singer Michael Jackson. There are some unsettling elements present that include images of 9/11 and nuclear warfare, but the point is to start conversation regarding the destructive nature of humanity and the damage humans cause to the earth and each other. 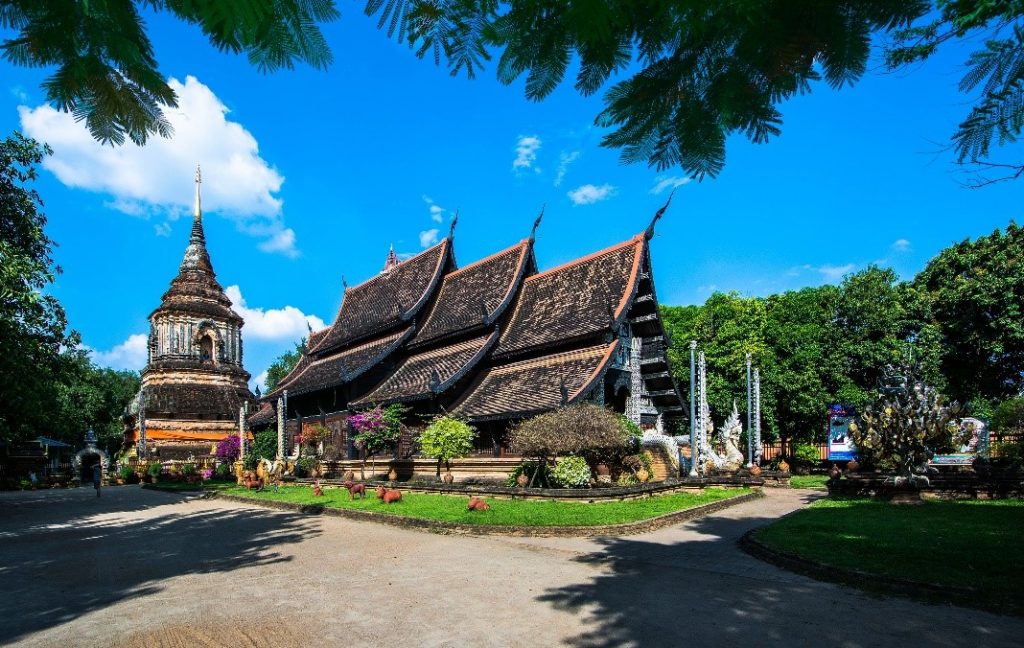 Located about 400 meters (a quarter of a mile) from Chang Phuak, Wat Lok Moli (or Wat Lok Molee) is at least 800-years old, but it’s unknown how old the temple actually is! There are references to the temple back in the 1300s during the sixth king of the Mangrai dynasty’s reign. During this period, Burmese (now Myanmar) Buddhist monks stayed at the temple to help spread their teachings. During the 1500s, the chedi and viharn were built, completing the structure as it appears today.

The tidy gardens enhance Wat Lok Moli’s picturesque appearance. The overall structure goes against the grain of other temples in the Chiang Mai area and in Thailand, in general. Bare brickwork, wooden façades, and North-South-aligning axis are key features that make Wat Lok Moli different as many temples use stucco and face an East-West axis. The temple features the traditional Lanna architecture style.

Inside the chedi, the ashes of Mengrai dynasty royalty reside, including the ashes of queen regnant Wisutthithewi who ruled Lanna from 1564-1578. 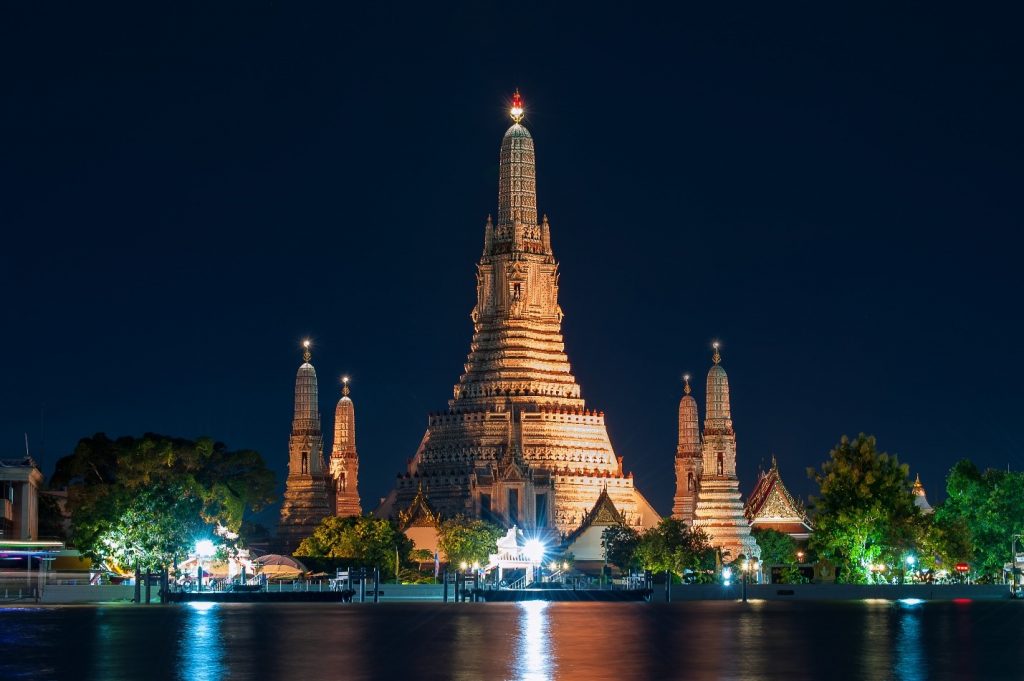 As one of Bangkok’s and Thailand’s most famous temples, Wat Arun is one of the must-see attractions for many visiting the city and country. The temple’s located just west of the Chao Phraya River and can be reached via ferry or taxi.

Prior to being known as Wat Arun, the temple was called Wat Makok (olive temple) during the Ayutthaya era. During the 19th Century, King Rama II had the temple restored and the towers raised to the height they are today.

Wat Arun is Bangkok’s highest temple at 82m (270 feet) high! It utilizes Khmer architecture, so it resembles Cambodian sanctuaries with its appearance. The highest prang symbolizes Mount Meru, which for Tibetan Buddhists is considered the center of the world. The four smaller prangs represent and house four guardian gods.

The temple earns is “Temple of Dawn” moniker thanks to the porcelain and seashell tiles that cover the façade. When the sun rises, its rays gleam off the exterior creating a shimmery effect. The tiles feature floral patterns; the ordination hall features murals from royal life. The temple also has a marble-clad courtyard and Chinese stone statuary depicting lions, dragons, and warriors.

Of course, there are many other temples and sights to see in Thailand! We hope you enjoyed our selections. Please check out future Wanderlust Wednesday posts for more travel ideas.

*Note: As of May 11, 2022, Thailand requires proof of Covid-19 vaccine or a five-day quarantine period to enter the country.