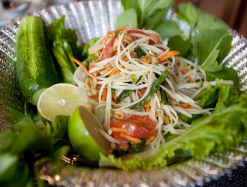 The name itself may sound like it is a weird combination, but having fruits involved in a tasty salad is no new combination. In fact, numerous European cuisines also utilized fruits in the same manner. It is all about accessibility when it comes to cooking. And this is a fine example of such principle. Due to its tropical environment, papaya is one of the primary fruits that exist in Laos. Hence, it should serve as no surprise to find papaya sneaking into a couple local dishes. The papaya salad, also known as Tam Mak Huong, is made from shredded papaya. The primary ingredients besides papaya are tomatoes, sprouts, basil, and peanuts. There are several versions of this dish, but the core element that glued the ingredients together remains constant. The main ingredients are then soaked with hot chili, sour lime, salt, fish sauce, and sugar. This is a refreshing take on the salad which is perfect in a hot climate. Be warned though, the spiciness of this dish may vary from vendor to vendor. 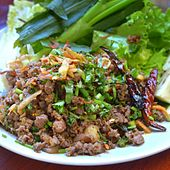 When it comes to Laotian cuisine, “spicy” is the name of the game. Following the main theme of fiery flavors, larb is another popular dish that one can find on the streets of Laos. In short, it is a type of meat salad. This dish is so popular that many deemed it as the national dish of Laos.  This special cuisine can be made from various sources of protein. Chicken, beef, pork, duck, fish, or even mushroom. The protein source is heavily flavored with lime juice, fish sauce, and fresh herbs. It is commonly accompanied by raw vegetables and sticky rice. One can even go as far to say that such combination is a match made in heaven. With its potent flavors from larb itself, balanced out with mild scent from the herbs on top of the neutralizer rice is simply a dance inside the mouth that one cannot be ignorant to. 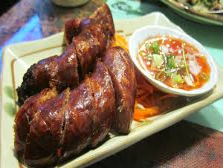 Sausage making has been revered as one of the many epiphanies in the culinary world. Packaging various parts of meat into a condensed cylinder package is often revered throughout the world. Hence, it should come as no surprise that Laos has its own interpretation of sausage.  In Laos, sausages are made from chopped pork. It is heavily seasoned with ginger, lime leaves, garlic, fish sauce, and salt. It is often accompanied by a side dish filled with fish sauce. Though it may not be easily accepted due to its scent stemmed from the fish sauce, its flavor is undeniably rich. And one should definitely not judge the sauce before trying it. 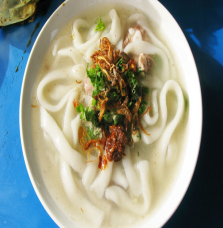 Unlike the western hemisphere, there are numerous types of noodles which are rice based. Khao Piak Sen is a descendent from the family of rice noodle dishes. It is part of traditional Laotian cuisine, often seen as comfort food. The closest Western equivalent would be the infamous chicken noodle soup. Much like chicken noodle soup, Kaho Piak Sen does not require many ingredients, hence it is cherished as the perfect dish with its simplicity. In fact, this rice noodle soup is often consumed at breakfast time. The bowl comes with beef or chicken broth, which is then poured over rice noodles that are accompanied by various herbs. 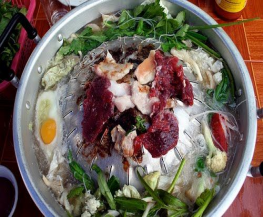 As you now know, concepts of some of the most popular dishes in the world are shared at different corners of the globe. Hence, allowing the cultures to inject their own identity into it and present the world with their own interpretation. Barbecue, revered as the salvation of Western cuisine, also exist in Laos. The traditional Lao barbecue includes a round metal dish and a cooking platform where one can take a slab of fat and coat it before the grilling process. Many sources of protein are available to choose from, but chicken and pork are the two most popular protein sources. Locally, Lao-styled barbecue is known as Sindad. What stands out the most in Lao-style barbecue is the sauce that accompanies the content of the dining experience. Unlike the popular Western BBQ that usually accompanies the meat and sauce prior to the actual cooking process, Lao-style bbq does the opposite: The sauce accompanies the meat after it was cooked. Due to its simplicity in preparation, it is very easy to find Lao-style BBQ on the streets.