The National Flower of Vietnam

If you have ever visited Vietnam, you will see that there are so many different kind of flowers there especially in the summer. In big cities like Hanoi or Saigon, you can easily buy a bunch of beautiful flowers on the street from one of those venders but have you ever wondered what the national flower of Vietnam might be? If yes, I do have the answer for you. It’s the Lotus. 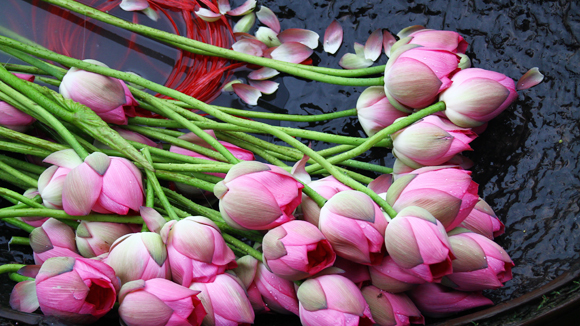 Yes, you probably heard of it, have seen it and yes, even eaten it but now you know that the Lotus flower is Vietnam’s National Flower.

What’s so special about this flower that makes it Vietnam’s National Flower?

Lotus symbolizes beauty, commitment, health, honor and knowledge. Lotus flowers grow from the muddy pond but their seed grows toward the direction of the sun light, which represent the purity of spirit. Lotus is said to be the symbol of summer as it often blossoms in summer time when there is a lot of bright sunlight. At night the flower closes and sinks underwater, at dawn it rises and opens again. 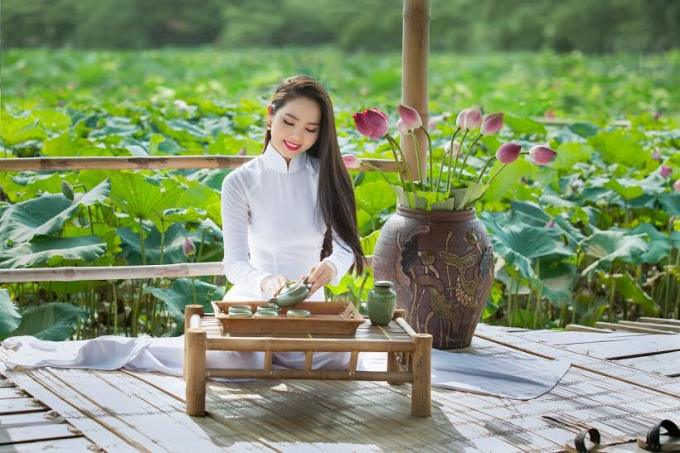 The colors have different meanings

Lotus flowers are beautiful in both appearance and smell. The color of lotus flowers are usually pink, red, white, blue and purple, each color has a different meaning but they all have pleasant smells and people simply love them at first sight.

85.5% of Vietnamese people are Buddhist so when people go to the temple to pray they bring pink lotus with them to show a devotion to Buddha 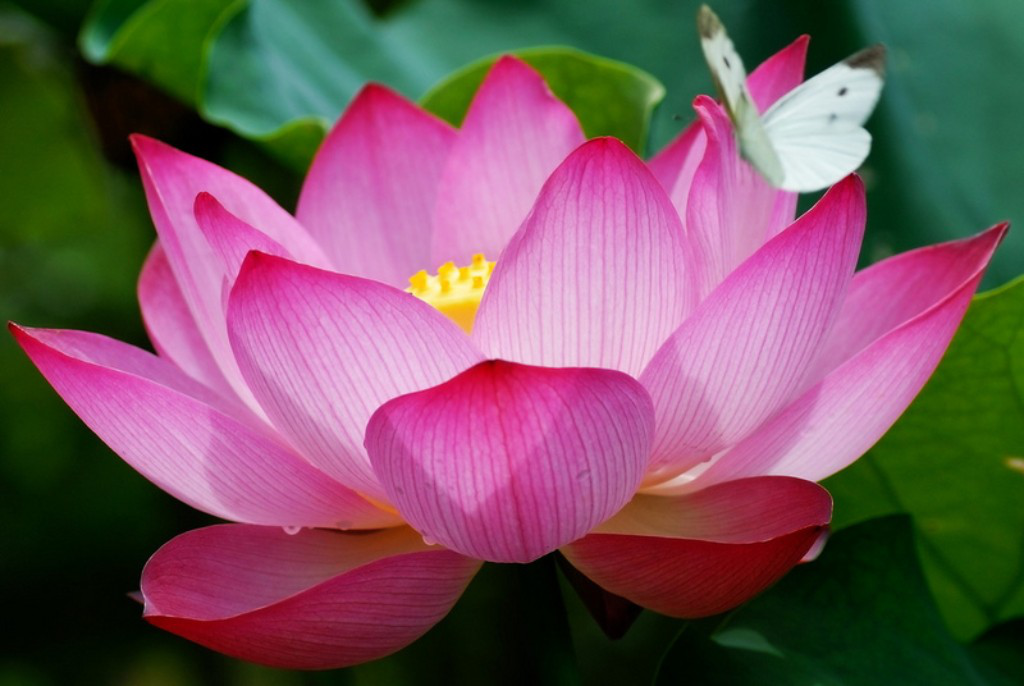 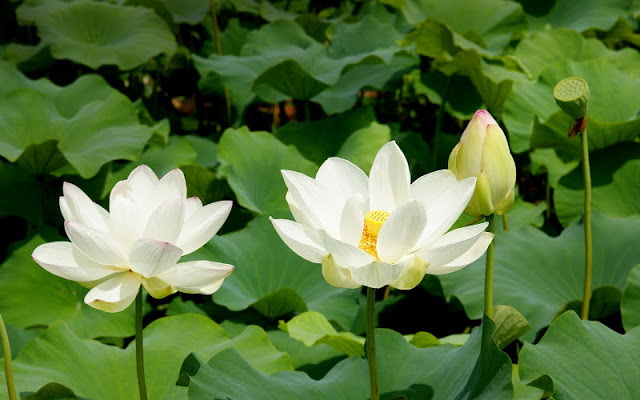 The white lotus represents purity like the beauty of the Vietnamese women.  If you notice you can see that a lot of Ao Dai (Vietnamese women traditional dress) have a lotus flower on them, too like this one: 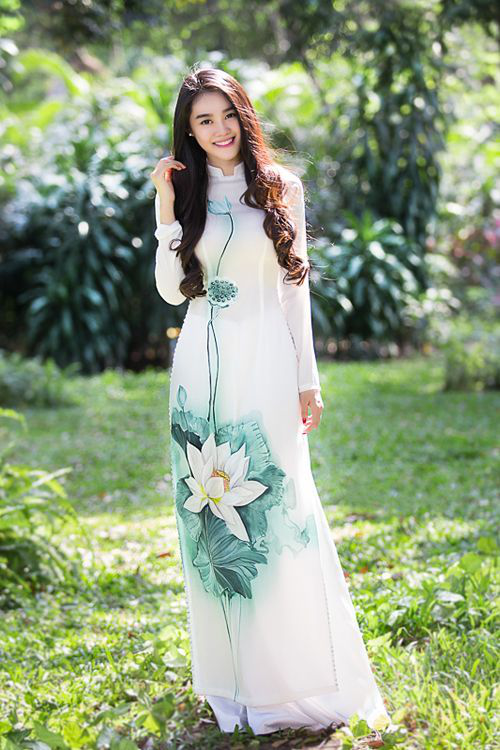 Blue, with its wisdom and logic, represents enlightenment. 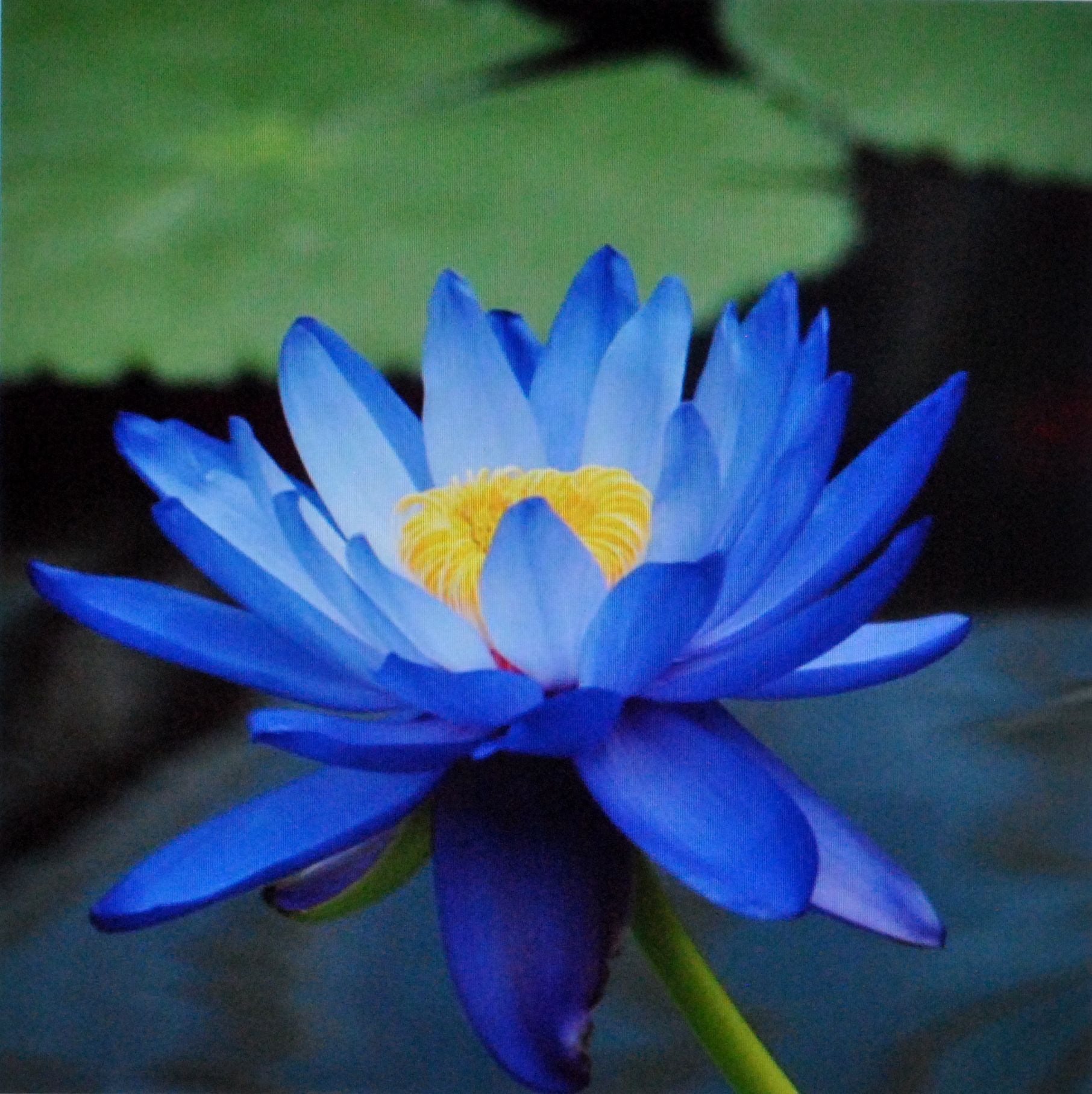 Purple shows spirituality, and green is the color of rebirth. So if you plan on giving the lotus as a gift, make sure you think about what kind of message you wish to send. 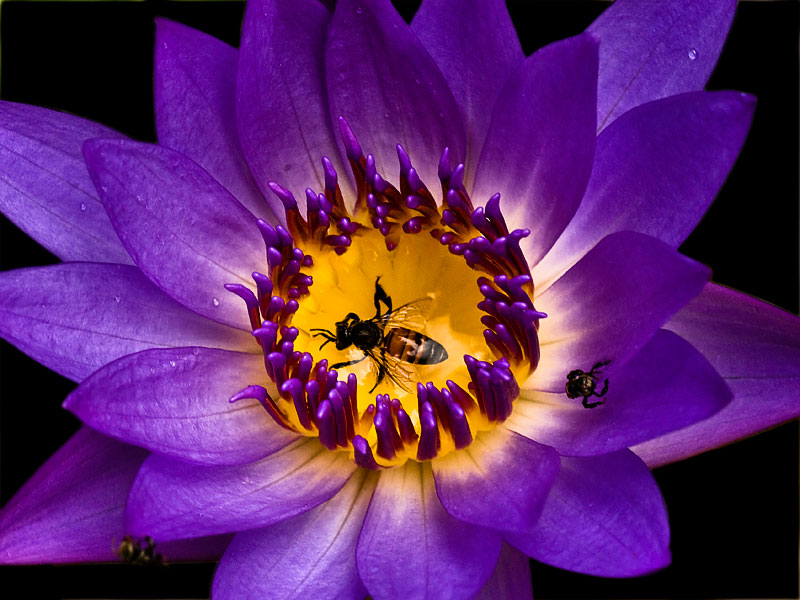 The Lotus is part of Vietnamese cuisine

Different parts of the lotus can be used for different purposes: the flowers are used for decoration, praying when you go to the temple or home decorations. The seeds are used for making lotus tea, nutritious healthy foods/deserts and medicine. 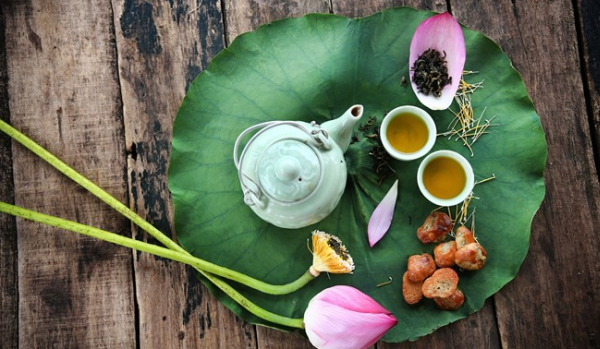 Lotus tea is part of many festivals and ceremonies in Vietnam. To make it, you enclose tea in the flower to infuse them with the scent. An alternative method is to bake the stamens – the part of the flower that makes pollen – with the tea leaves in an oven. This process is repeated several times to strengthen the flavor. 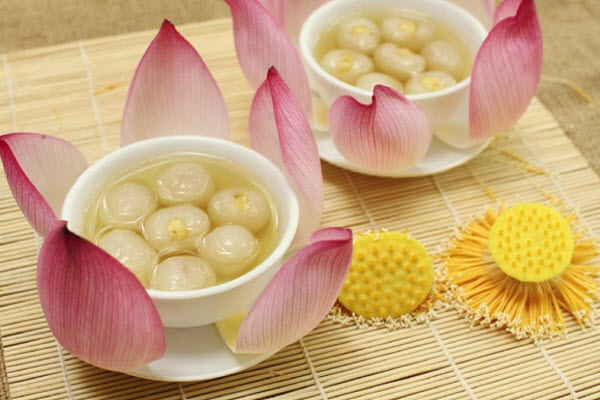 While the green leaves are used to wrap delicious dishes like the sticky rice, chicken rice and green rice. 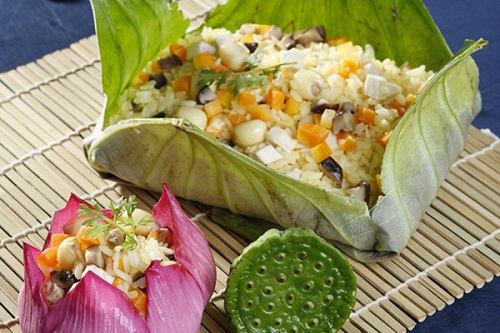 Benefits of the Lotus root

Last but not least, the lotus root. Lotus root has a wide range of health benefits owing to its rich nutritional composition. The benefits include its ability to improve digestion, reduce cholesterol, lower blood pressure, boost the immune system, prevent various forms of cancer, balance mood and relieve depression, increase the blood circulation, and maintain proper enzymatic activity in the body. Knowing that fact, Vietnamese people consider lotus root is a very valuable ingredient when they make the dishes out of it.

While the lotus flower is used for tea, the stem is used in Vietnamese-style salads, called Gỏi. The roasted seeds of young lotus flowers make for a tasty snack as well. Some popular dishes are lotus root snack, lotus root soup, lotus root salad, etc. 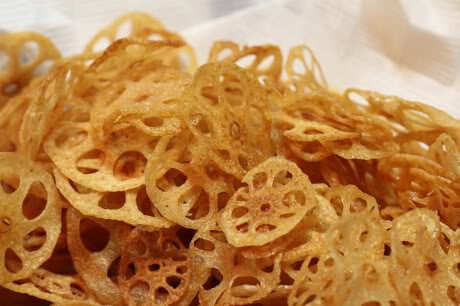 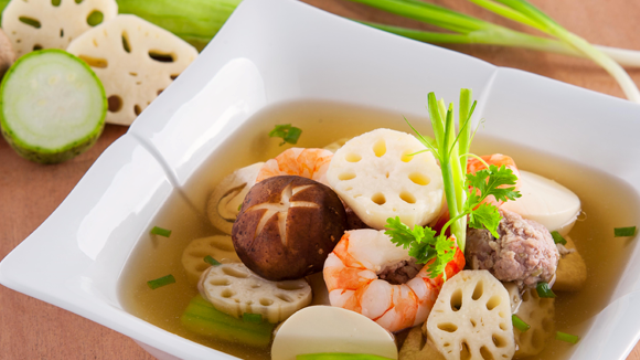 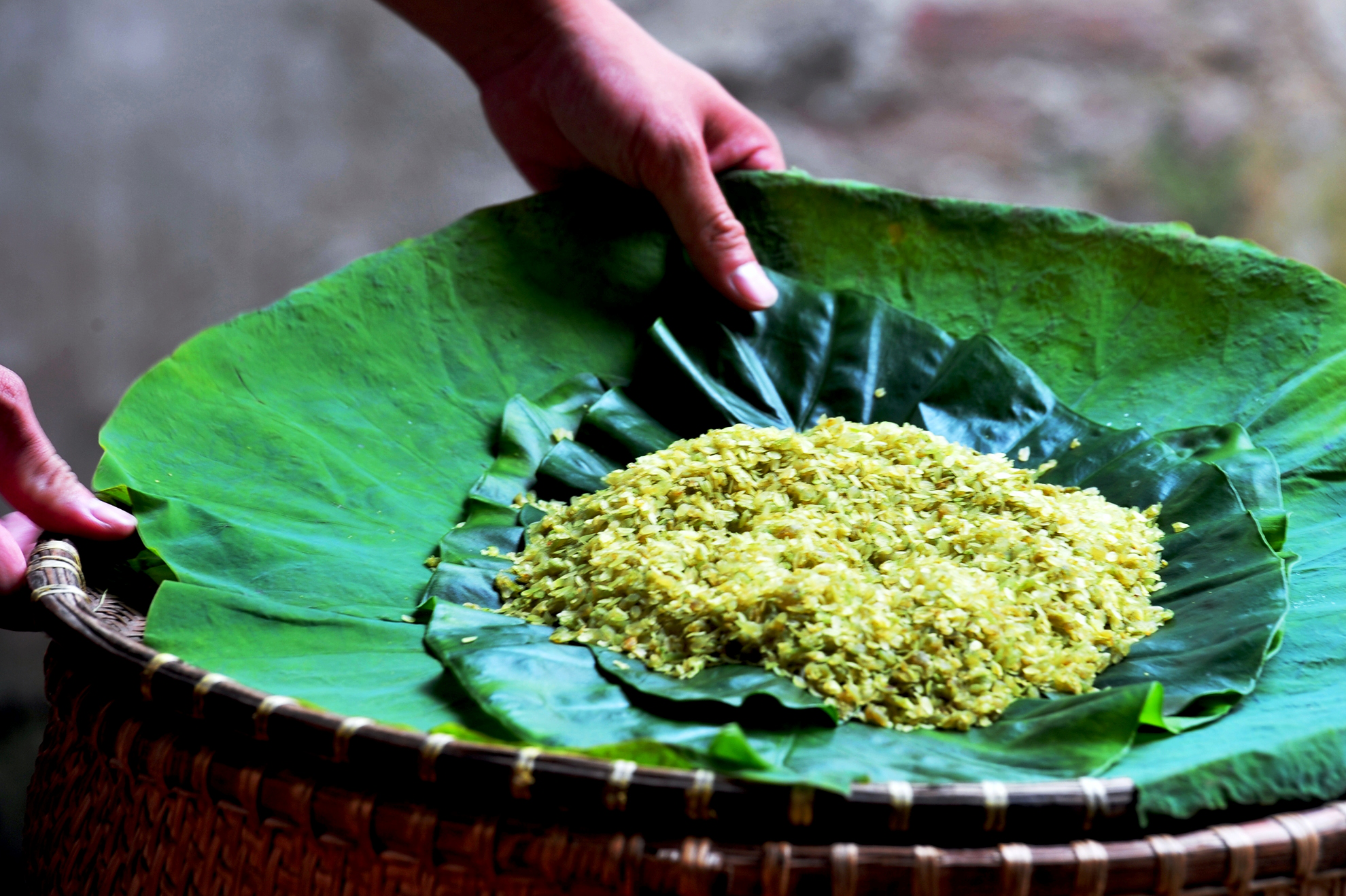 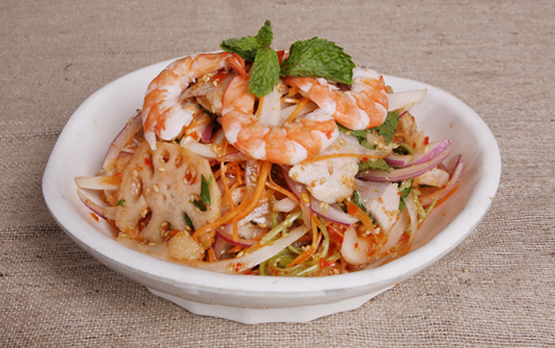 As I mentioned, 85.5% of Vietnamese people are Buddhist. For Buddhists, the way that water slides off lotus petals represents the detachment aspect of their faith, which tells them to let go of lusts, cravings and desires. This is one of the reasons why many statues and images show Buddha sitting on a lotus 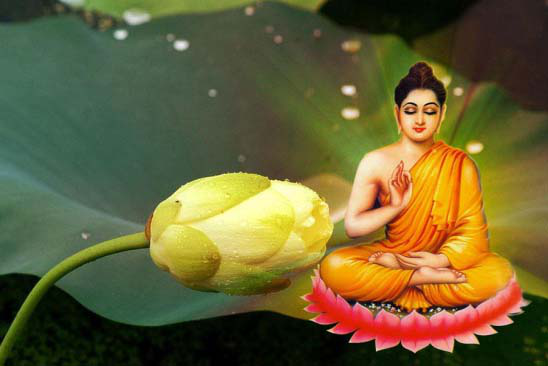 Since lotus is Vietnam’s national flower, many big corporations chose lotus to be their symbol. One of them is the largest Airlines, “Vietnam Airlines.” Since its original introduction in 2002, “Vietnam Airline’s” Golden Lotus brand has achieved remarkable success, and the distinctive symbol has gained recognition and respect around the world.

In 2015, to enhance the competitive position in the highly-dynamic market, “Vietnam Airlines” took measures to update their Golden Lotus symbol and launched the refresh brand with significant improvements in its infrastructure, operations and fleet. Besides lotus flower, Vietnamese cultural heritage continues to be an important theme for defining, differentiating and enriching the new “Vietnam Airline’s” identity and image.

There is so much more about this beautiful flower to discover. Next time when you visit Viet Nam, remember to pay a visit to the lotus pond and you will definitely be amazed by its beauty.