Anda, who was formerly known as Andamiro, is a Korean singer, model and actress who made her debut as a Korean pop singer in April of 2012. Anda dreamt of being a performer since her early teens so she experienced… 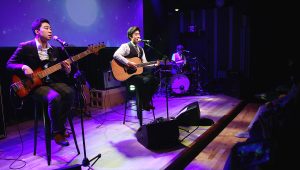 ‘Blue Paprika’ is a Korean Indie band that consists of three musicians whose names are Won-young Lee, Kihoon Sung and Min-gyu Kang. They are an Indie band..