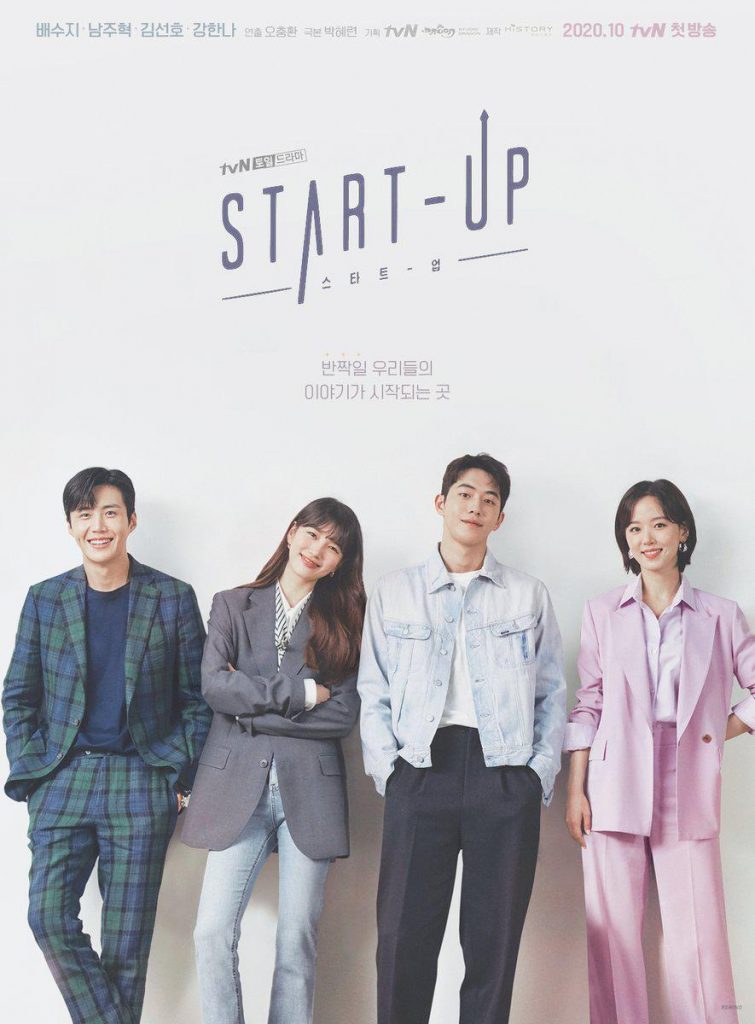 Start-Up is one of the few dramas I’ve seen some of my friends buy merchandise for and now I totally understand why. This drama was such a blast to watch! There are very few downer moments in this show, despite some heavier themes. I highly recommend this after a more weepy K-Drama or if you need some extra sunshine in your life! Warning: Spoilers Ahead.

This show centers around Dal-mi, a young entrepreneur who wants to walk in her late father’s footsteps. As a child, she wrote letters to a boy named Nam Do-San. Turns out, they were actually written by a young man her grandmother knew, using the name of a boy in a newspaper so that she wouldn’t find out. Dal-mi years later goes in search of Do-San and finds him! But the now successful business man, Ji-pyeong, who actually penned the letters finds him first and convinces Do-San to pretend to have been writing the letters all along.

I loved the tension in this drama. Who would Dal-mi choose!? Her first love or the new Do-San? The lies create unrest in the characters of Ji-pyeong and Do-San as well. Ji-pyeong knows he is Dal-mi’s first love and starts to fall for her, but is blocked by her affection for Do-San. Do-San on the other hand is always trying to live up to the man in her letters. What a whirlwind.

The reveal of Ji-pyeong as the letter writer was done very well. I like that Dal-mi was starting to sense something wrong as well. I originally thought she would find out by comparing the handwriting of her letters to the handwriting of Ji-pyeong’s notes in their counterfeit handwriting system. I still think that could have been cool, but this reveal made it more impactful. She was able to talk to Do-San on the phone whilst being with Ji-pyeong holding her letter. It was a good shock!

The one moment I hated was when Do-San asks Dal-mi why she likes him after he returns from America. He looks at her with pleading eyes. She tells him she doesn’t know. And that was so disappointing for me! Even though she says that she just likes him—and he feels comforted by that—it didn’t feel satisfying at all. Why not say because he came to her rescue with the hackers, told off the CEO who insulted her, or how he was always supportive of her dreams? There are so many amazing qualities about Nam Do-San and just saying “I don’t know, I just like you” felt lame to me.

I liked how Ji-pyeong tells Dal-mi that he had 15 years to reach out to her and he never acted. Whereas the first day Do-San met her, his feelings propelled him to act. In the end, Do-San was the one who was meant to be with Dal-mi. Although, it was also fruitful that Ji-pyeong fell for Dal-mi. He started smiling and being more sincere after his affection grew for Dal-mi, and this led him to fund that youth organization at the end of the series. It was a great way to wrap up the show for him. Plot: 9/10

The Sandbox is a pretty cool place. The café, modern offices, and casual lounge area—it gives entrepreneurs a creative space to experiment. I like that they spent so much time here.

The layout of the house Dal-mi shares with her grandmother is homey! Its cozy vibes show the family warmth that Ji-pyeong is so attracted to. On the flip side, Do-San’s family home is darker and more serious. This helps us to experience the heaviness that he feels as a son who carries weighty expectations.

I also loved the old office that housed Samsan Tech in its beginner days. It’s a sweet scene when the team goes back one last time, with tears in their eyes at their humble beginnings. Setting: 7/10 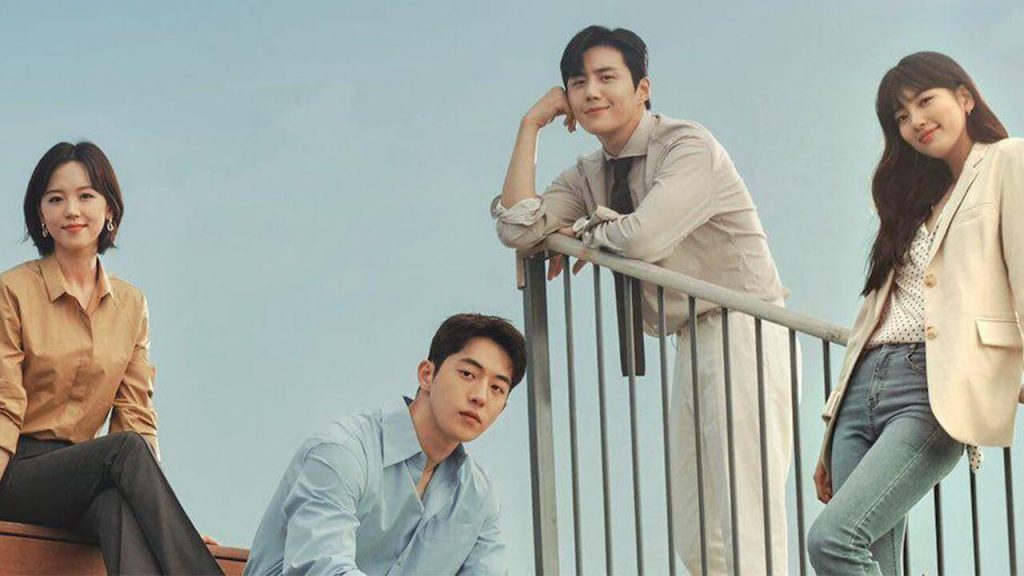 I like that we saw Dal-mi as a child because it set the scene for us to understand her as an adult. She is sweet, happy-go-lucky, and carefree. Her personality was perfectly crafted for this role as she navigates her sharp sister and falls for the dream of Do-San.

Do-San has a great character arc in this series. He starts insecure but becomes strong after living on his own in America. This shows how impactful being around others’ expectations can be. Although his personality doesn’t change, he becomes sure of himself and his value. He doesn’t need words of affirmation from Dal-mi or his parents. This was a beautiful thing to see and it made his relationships better in the end. I also love that he married Dal-mi, too!

Ji-pyeong was an interesting character. He was closed off, well-to-do, and confident. Despite his firm appearance, he is soft inside. His love for Dal-mi’s grandmother, the way he chooses to tell Do-San the truth (that he should shoot his shot with Dal-mi), how he chooses to put professionalism above his emotions—this all displays his strength of character. Due to the difference in age and status, he made for an interesting and compelling rival to Do-San, even despite his backstory with Dal-mi.

I found the side characters to be fun, but a little less compelling. Characters: 7/10

“She likes my hands”—the main theme in this show is authenticity. Nam Do-San continually questions why Dal-mi likes him. He knows he is living a lie, but still hopes that this misunderstanding can become reality. He wants to be loved for who he is and likewise, he deserves to be! He holds onto the one thing that Dal-mi actually likes about him, not the Nam Do-San from the letters.

This theme shows us that we need to be ourselves. If we project someone other than who we are, we will forever be questioning our self-worth. Do others like me for me, or just what I project? This gave me some good self-reflection during the show. Theme: 8/10

When I hear this OST, I get excited! There’s a sense of hope, adventure, and fun love. My favorite upbeat tracks from this soundtrack are “Future” by Red Velvet and “Running” by Gaho. For emotional songs, check out “Day & Night” by Jung Seung Hwan, “One Day” by Kim Feel, and “My Love” by Davichi. OST: 9/10 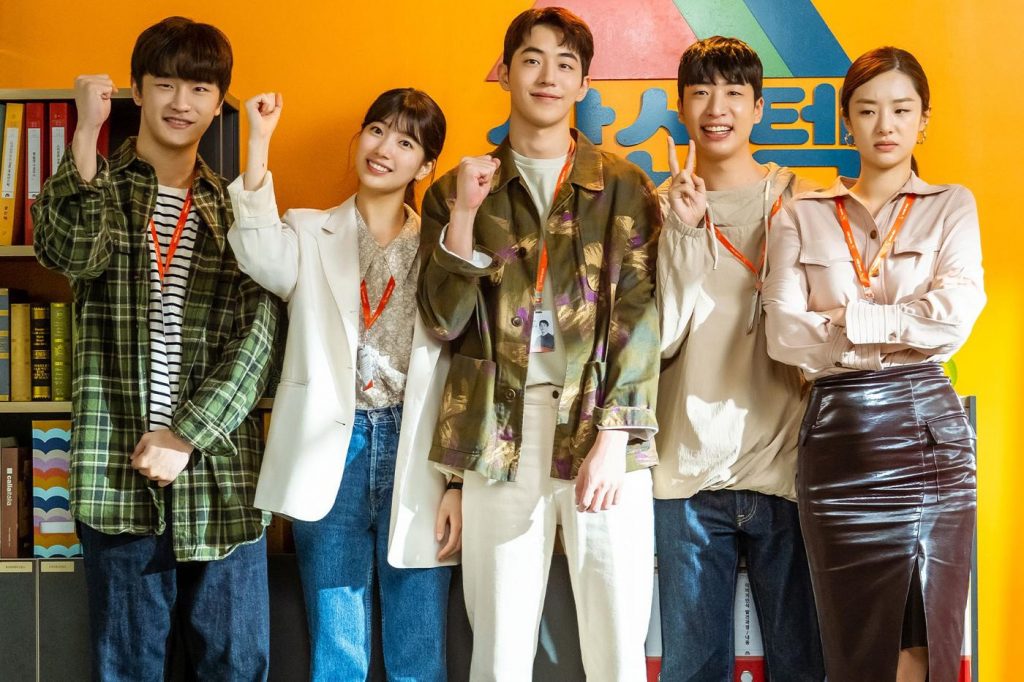 I totally binged Start-Up. It’s such a rush of good feels, interesting plot lines, and humorous moments. There’s a reason so many people were talking about this show! I only teared up three times, and two of those were happy cries—perhaps a record for the K-dramas I have seen. If you need a pick-me-up, don’t hesitate to watch Start-Up! FINAL: 8/10