Hit Point, the creators behind the hit game Neko Atsume, teamed up with Sega Toys for a new app game that could potentially gain the following its predecessor has.

Spoon Pets, released March 16, 2016, features cute, hamster-esque critters instead of adorable, smiley kitties. Besides hamsters, players can collect puppies, kittens, birds, and sheep. The pets are really cute and have that recognizable chibi-charm that many Japanese characters have. While playing, thoughts of Hamtaro come to mind because the characters have similar cuteness.

The game functions the same way as Neko Atsume: Players place toys and food in the yard and house, then they collect different pets, take their pictures, and figure out how to keep them coming back while attracting new pets. Like Neko Atsume, players can check the game periodically throughout the day, so they do not have to play for long periods, making the game perfect for children.

Like Neko Atsume, players have to purchase toys and different food to attract pets via the shop. Instead of fish, players use silver and gold spoons to purchase what the pets need. What’s funny about the shop items is that they go outside the scope of realism, a big departure from Neko Atsume. In Neko Atsume, cats eat typical cat foods, but with Spoon Pets, candy, pancakes, and cake are part of a balanced diet for bringing all the pets to the yard. 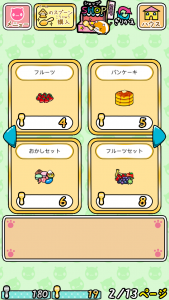 Since the game is new, there aren’t a lot of toys to purchase yet. Right now, there are a handful of tables, houses, balls, and swings for the critters, but as the game updates and increases in popularity, more is expected to be added.

One positive departure from Neko Atsume is how the Spoon Pets walk around and interact with the toys. The pets dance, sleep, show that they’re happy, and even get cranky if they’re roaming around the yard too long without interacting with something or without a player interacting with them. To interact with pets and place them near toys, you can scoop them up with a spoon located in the upper right hand corner of the screen. It’s funny to watch how the pets react when scooped up by the spoon: Some are relaxed, others flail, and some cry.  Hit Point gets credit for giving the critters emotions for this game, just like they earn credit for giving the animals an ability to walk around. 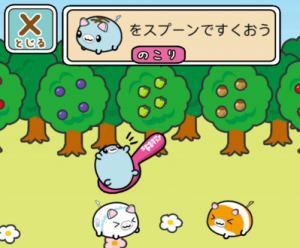 There are other positives for Spoon Pets as well. For example, players can play two mini games that can help them earn gold and silver spoons. The mini games involve capturing the pets with the spoons and matching them up to a picture. While it sounds easy, the critters do move around quickly, so it’s not as easy as it looks.

Like with Neko Atsume, as play continues, players earn more spoons or they can purchase spoons using real money; players can wait until they have enough spoons or “cheat” and buy some to level up quickly.

Additionally, mementos from the pets can be used, which differs from Neko Atsume. For Spoon Pets, the creatures give the players different hats and accessories; which, in turn, the player can use to accessorize their pets.  Mementos are earned based on how often an animal visits as well as if the player keeps favorite toys and food available to attract them, just like Neko Atsume. 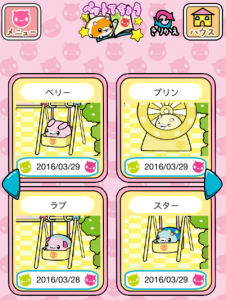 While the game is adorable and has some refreshing changes, Spoon Pets lacks some of the charm Neko Atsume has. The animation isn’t as sharp, and this is especially noticeable when taking pictures of the pets since some turn out blurry. And while the animated creatures add an aww-factor, it seems like the animation was used in place of higher quality colors and appearance.

The toys also appear to be lacking. The pets can lounge on a macaroon cushion or bed, take a shower, or play around on a swing, wheel, or house, but that’s it in terms of variety. There are also tongs, but this toy is more mean than cute since the little pets struggle to try to get out of them. There’s also not a lot of space to place toys, so a player is limited on what they can put out. There is a yard expansion available, but it costs 280 gold spoons.

Another issue is that the collection portion of the game can be completed too quickly. Within the first four days of play, my catalog was already full as all the pets showed up in my yard. With Neko Atsume, strategizing and playing around with different food/toy combinations made the game more worthwhile and more involved. With Spoon Pets, there isn’t a lot of work involved to get animals to appear. This makes the game slightly underwhelming and disappointing. One saving grace is that it appears that the animals do give players multiple mementos, so it’s worth playing to see how that plays out.

As the game grows, these elements might be fixed.

For English-speaking players, the game is currently only in Japanese because it is a Japan release. However, since the menus are similar to Neko Atsume’s, they are easy to navigate and figure out. There shouldn’t be any issues with game play.

Another aspect to note about Spoon Pets is that the game is based on the toys with the same name that have been released in Japan (and available on Amazon stateside). The toys were released a few years ago in all their adorable glory, so creating an app game based on them makes sense as young people familiar with the toys will play while those who enjoy Neko Atsume will gravitate toward it due to similar gameplay. For Sega Toys and Hit Point, this is an interesting and potentially successful marketing strategy.

As a whole, while Spoon Pets is an adorable game with potential to be a mega-hit, it doesn’t have the charms Neko Atsume has due to some weaknesses in game play and style. As the game updates, perhaps it will improve, but right now, it’s a solid 2.5/5.

Spoon Pets is currently only available for iOS.