Bulgogi beef, a staple in Korean cuisine, is a dish that is made with thin slices of marinated beef. Bulgogi translates to fire meat in Korean since it is usually cooked on a grill.**
According to CNN, bulgogi was named one of the tastiest meals in the world in 2011. It’s easy to taste why! The grilled meat is rich in smoky warmth due to hints of cayenne and serrano peppers with just enough honey-sweetness to temper the taste.  Served over rice, this dish is a filling, delightful meal.

While bulgogi is a favorite for many Koreans and International food lovers, one of the qualms people may have is the soy sauce used to marinate the meat. Some people may not like the taste, and others may be allergic. If you fit into either category, bulgogi may seem like a food that needs to be avoided. It doesn’t have to be the case!

After some trial-and-error, a recipe does exist to make bulgogi that tastes just as good as the soy sauce version, and all it takes is a few simple ingredients you may have in your house right now.

**This recipe will use a cast iron skillet. 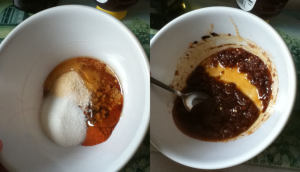 1. When mixed, the marinade ingredients will turn rust red.

2 Drizzle about two tables on the meat and massage it in. Use a tenderize to make the meat thinner prior to adding the marinade paste. Massage the paste into the meat, then slice it, bag it and place it in the fridge for 24-hours.

20-minutes before cooking the beef, cook the rice. Since the meat will cook quickly, you don’t want it to burn or get cold before the rice is ready. 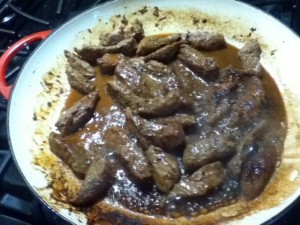 3 The marinade should also still be in the pan since you need it as a garnish at the end.

There you have it: Tasty, delicious bulgogi that is tasty for all foodies! Just wait until you try it!
Is there any Asian cuisine you want to learn how to cook? Let us know so we can create a reader-friendly recipe for you!