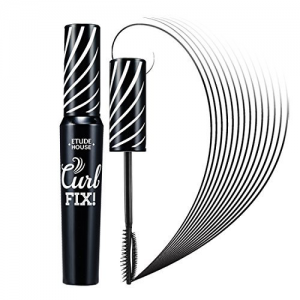 We love our beauty products here at KCrush, so we attempt to try different products whenever we can. When a need for mascara arose, an Etude House product was a natural choice, especially since Etude House is a favorite brand not only for some of us but for other Korean beauty lovers.

The Lash Perm Curl Fix mascara sounded like a great option because it claims to address several problem areas while providing benefits many mascara-lovers look for including:

Reading what the mascara does makes it seem like a Holy Grail mascara, especially since Etude House boasts that the mascara as a dual-head jelly brush that can “lift and curl short and straight lashes.” I’m sold! For $14, how could I go wrong?

First, the mascara is packaged well. It comes in a nice box and a plastic seal, so the integrity of the product is in place. The bottle, too, is nice. It’s a basic design that highlights the name of the product, and it has a nice wand. But, since it’s mascara, a lot of thought and intense designs are not needed, so don’t expect anything fancy. When opened, the wand is, in fact, a dual brush. The mix of shorter and longer bristles will, in theory, coat the lashes well and help with curling them. There’s a shorter side that looks like it’ll lift the roots well, and the long side looks like it would comb through lashes and help with lengthening. So far, things look promising.

Unfortunately, this is where all promises fail to live up to expectations.

First, the spoolie brush (simplified to just “brush” for the rest of the review) is not a jelly brush as promised. It’s a standard brush with fiber bristles. On top of that, the wand looks nothing like the Etude House pictures with short, densely packed bristles or long, slightly spaced out bristles. It’s noticeable the wand is curved, so at least that’s correct in what is advertised, but other than that, this wand is far from what’s shown in advertising.

For a formula that claims to be clump-free, the brush should have nice, even coverage when removed from the tube, and the bristles should be able to comb through lashes to lengthen them without giving the illusion of tarantula eyes. This mascara fails with both accounts. The bottom of the brush doesn’t get enough product; the tip, however, is covered in too much product. 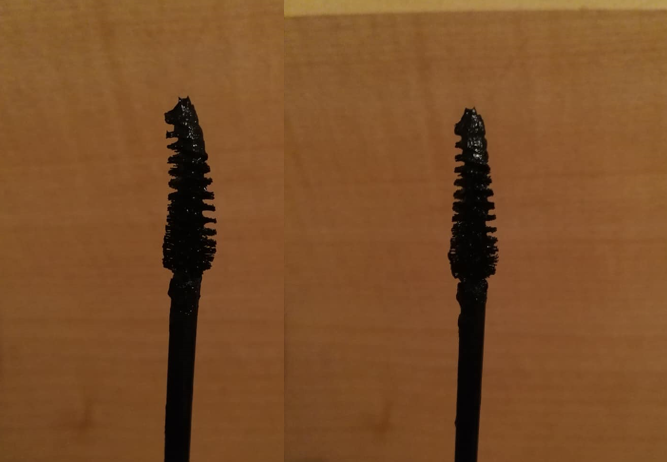 The curve of the brush is why parts of it get more product than others. This is where I prefer a straight, spiral brush or a dense bristle because clumps and uneven coverage aren’t a huge problem. Right off the bat, I can tell this mascara is not going to work for me.

When applied, one coat is like taking a trip to Clump City. This mascara is so clumpy, it feels heavy and sticky on the lashes. Because it’s so clumpy, this also means it’s takes forever to dry, so it gets all over the upper and lower eyelids. After applying the mascara, it’s a good idea to use a lash comb. 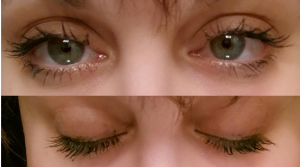 Finally, is the mascara waterproof? The answer is “yes.” After it finally dries, the mascara does not budge. In fact, it is difficult to remove, so it will take a few washes before it comes off completely. For me, it took an oil-based cleanser, a foam cleanser, a makeup removing wipe, and my Clarisonic to finally get it off. However, this was after a few hours of wear. When I wore it for more than ten hours, the mascara did tend to flake off, and it was easier to wash off. This leads to the promised “long-wear.” This mascara does tend to last, so there is a plus amongst the failed promises. However, it does flake.

After trying this mascara, I actually longed for my Julep and Laura Gellar mascaras because the Lash Perm was such a fail. I go through mascara like water because I use it every day, so I know what I like and what works best for me. This one was bought because my go-tos were sold out and because it’s rare for me to meet an Etude House product I didn’t like. Sadly, the Lash Perm mascara is a rare miss for Etude House, and it’s probably one of the worst mascaras I’ve ever used since wearing makeup. While it’s possible I may have just received a bad tube, I doubt I’ll try it again to see if this was the case.

The Etude House Lash Perm Curl Fix mascara earns a 1/5, and it only earns that due to the 10-hour wear I did experience.

Do you have any products you love that you want us to try? Send us a message below or on our Facebook page!