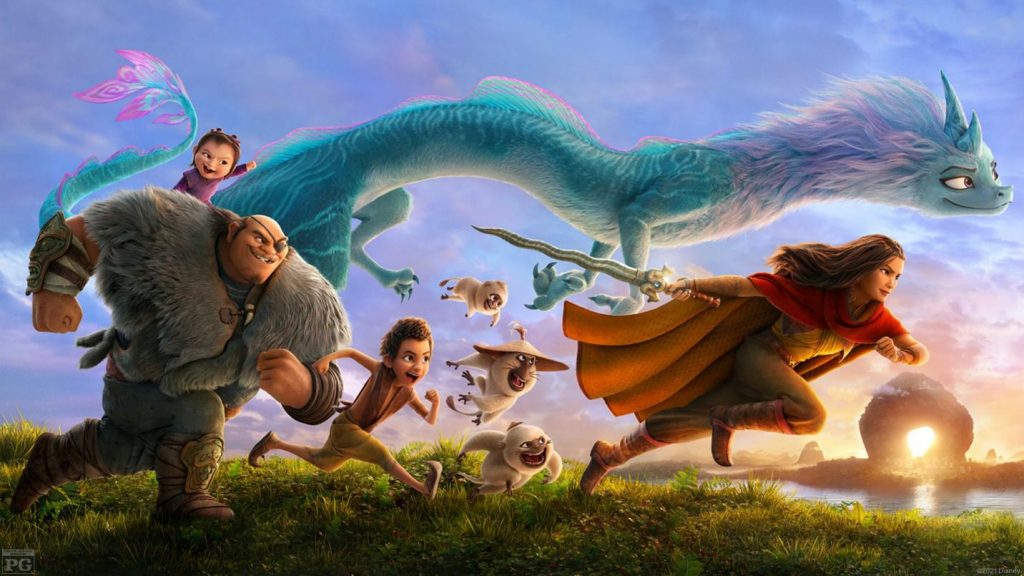 Words cannot express how incredible the message and imagery of Disney’s Raya and the Last Dragon are, but it’s worth a shot!

Raya and the Last Dragon (Raya from this point on), which was released via premier access on Disney+ and limited theater release on March 5, 2021, is a sweeping tale that marks the return of Disney’s stirring storytelling. The story takes place in Kumandra, a land inspired by Southeast Asia’s glorious landscapes and culture, 500 years after the land split into five distinct kingdoms: Heart, Fang, Spin, Tail, and Talon. The main protagonist, Raya (Kelly Tran), journeys the lands to find the last dragon, Sisu (Awkwafina), and pieces of the dragon gem in hopes of beating the Druun and reuniting the clans to become Kumandra again.

At the heart of Raya lies the message of trust. The message opens the film and radiates until the end. The message is one adults and children can see and absorb, so it isn’t a message that is “over the head” of younger audiences. Through Sisu, Raya, Namaari (Gemma Chan), and the rest of Raya’s rag-tag gang, the theme of trust crops up often as the true way for each nation to reunite as one. The message is timely given how we live in an era of unrest between different races and cultures. In its simplest form, having each character come together to fight for the common good is a great discussion point for children to help them understand how people can and should come together to overcome prejudices. While shown explicitly at first, the message shows how not trusting everyone can break down a society and continue to cause rifts.

In its subtleness, the issues with trust between two of the main characters, Raya and Namaari, show how people can have protagonist and antagonist roles as reflected in internal turmoil each character navigates as the story unfolds. Raya and Namaari serve as Âm dương (Vietnamese), or Yin and Yang. The characters bring out the best and worst in each other starting from their youth until their adult years. As the two run into each other and navigate through feelings of hope, betrayal, faith, hurt, and anger, their growth as characters embody the concept of learning to trust even when the odds are against people. Their dynamics are one of the strongest elements in Raya, and their character developments are handled gracefully without being heavy-handed in the overall message. 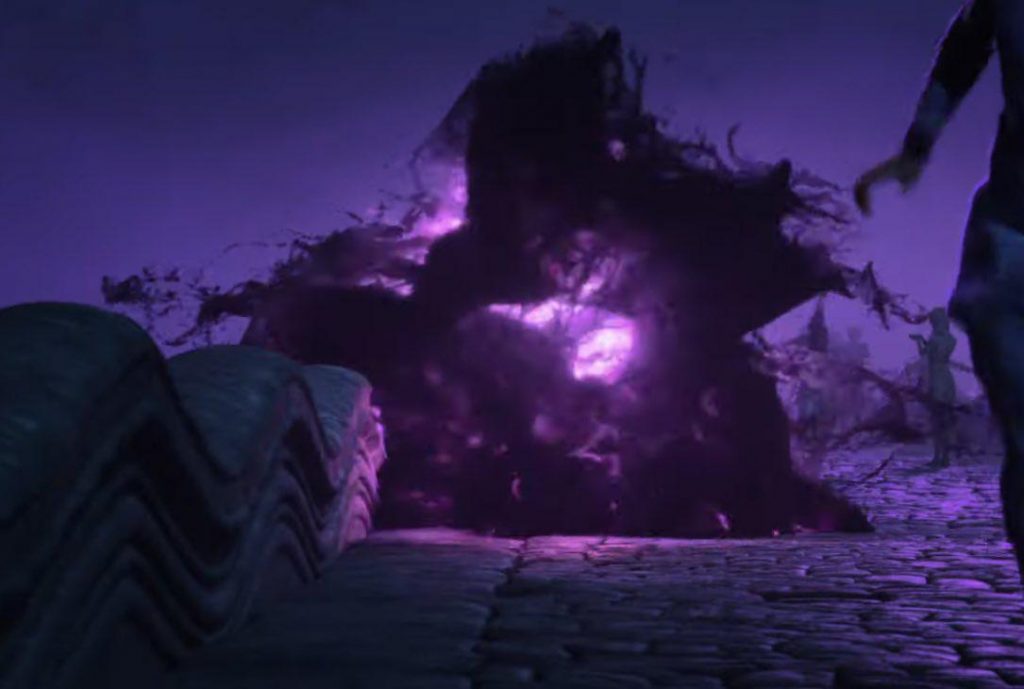 With the Druun, the concept of a plague sweeping the land and stopping at nothing reflects the story of how the lack of trust destroys humanity. The concept of Druun, a plague born from human hate and conflict, isn’t new as it’s a theme that has shown up in children’s films over the years. Fans of The Neverending Story and Harry Potter may recognize the concept as it appears in the form of The Nothing and Dementors, respectively, but it’s still relevant today as people are consumed by hate and fear. The Druun, in this case, erupts when there is conflict and will stop at nothing until all of humanity is turned to stone. The way the Druun’s animated can be a bit scary for younger audiences, especially toward the end of the movie as it consumes people en masse, but the representation serves as a visual reminder on how division and hate have consequences.

Beyond the characters and message, Raya shines in many areas. The musical score and scenery serve as epic backdrops and enhance the stories in ways that touch the heart.

In Raya, the larger-than-life music moves the story to new, emotional heights. While Raya didn’t have any singing, the music stands alone. Raya marks the return of composer James Newton Howard to the Disney fold; he is responsible for the scores used in Atlantis: The Last Empire and Treasure Planet. The music does well capturing the Southeast Asian vibe as it uses some traditional instruments including the gamelan to help set the mood. Howard’s arrangement of the music is pure magic! The rises and falls of the notes and the intense build-ups in “Running on Raindrops” and “Return” provide tear-jerking moments, while the land-themed tracks like “Storming Fang” provide excitement. Raya has one of the best soundtracks from any recent Disney film and stands alone beautifully even without the film.

Raya also presents some of Disney’s most stunning landscapes. The world Raya’s set in calls upon different cultures beautifully. Talon, for example, is heavily influenced by marketplaces present in Thailand, Laos, and Indonesia; whereas the river at the end of Tail calls upon the landscape along the Mekong River. Fang utilizes a more geometric appearance reminiscent of Cambodia’s Angkor Wat, while Spine’s landscape echoes Vietnam’s bamboo forests. The animation team did a solid job pulling different elements from different regions in Southeast Asia, so world-building earns a well-deserved kudos.

Beyond the landscapes, Disney incorporates other elements from the different cultures present in Southeast Asia. For example, when the characters pray or greet each other with their hands in a circle, it’s similar to nop (Laos) and wai (Thailand). In Kumandra, the level of respect given to a character is shown by where the hands are placed; the higher the hands, the more respect that’s present for the individual. Even when the Druun turns people into stone, the people stand in a pose that is reminiscent of someone giving a gift (gift-giving is a theme present in Raya and a polite gesture in East Asian culture). The poses of the stone people are an important image, and when the realization hits that everyone has that pose except the six main characters in the end, it holds a deeper meaning for viewers who recognize the theme of unity and togetherness.

Raya and the Last Dragon is a film that is child-friendly and an experience for the adult viewer. This film is a great reminder that Disney’s storytelling abilities are still sound, but it’s a brave, deep piece along the lines of Disney-Pixar’s Soul where the viewer is also required to think in addition to enjoying the stunning visuals. Raya is an awe-inspiring film that earns a rare 5/5!

What were your thoughts on Raya and the Last Dragon? Please share!

Raya and the Last Dragon: The 5 Regions of Kumandra Explained

East Eggs You Missed in Raya and the Last Dragon

Things Only Adults Notice in Raya and the Last Dragon