“Tat” is the Story (The Sequel)

Tattoos, in many cases, are cool. On some idols, tattoos look great even if they’re fake.

Zelo (L) and Himchan’s (R) tattoos were a result of Henna art. In Himchan’s image, you can see it being applied/via TS Entertainment and Twicsy 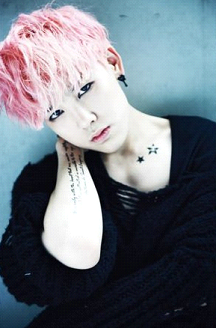 A while back, we provided some information on tattoos in Korea, and we looked at some idols and their tattoos to see what’s real or potentially fake. We continue that exploration in part two of our series with new idols and new tattoos! 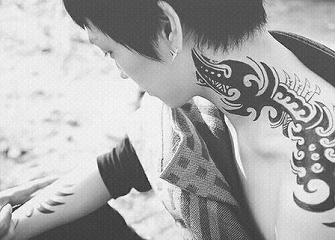 Although he’s known as Tatsmato, Himchan’s tats during B.A.P’s “No Mercy” era were definitely fake and sadly look like poor wet-and-stick ones from the 1990s.”Power” and “Warrior” era tats and body paint looked more appealing. There’s no indication he has any real ones unless he keeps them well-hidden.

Periodically, we’ll see Zelo with some convincing tattoos ranging from text to tribal tattoos on his arms, chest, and back. He pulls the look off well! Right now, the loveable giant maknae doesn’t have any tattoos, but if he did, fans may approve. 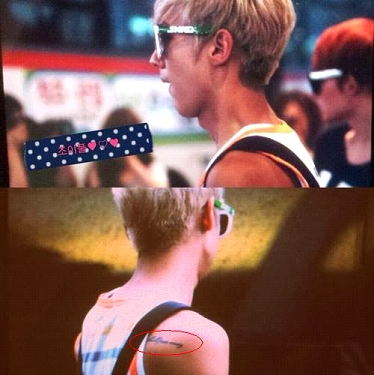 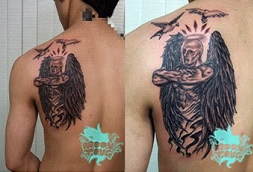 Both C.A.P and Chunji sport real tattoos. C.A.P has an angel on his left shoulder blade, what appears to be a large hand on the left side of his chest, and a small tattoo on the back of his neck.  Some pictures show he has more, but it’s unclear if these were for promotions, but confirmed tattoos stand at three.

Chunji’s tattoo is more elegant. Located on his right shoulder, Chunji has “this too shall pass away” written in script.

Yuchun and Jaejoong have many tattoos they can brag about including matching tattoos they have in honor of TVXQ. 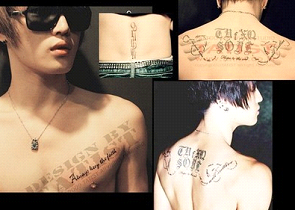 Jaejoong has considerably more tattoos than Yuchun, including:

In 2013, Minah took to Instagram to show off her pretty “carpe diem” tattoo on her hand. While it looked convincing, it was a henna tattoo for “Female President” promotions. On various programs, all the Girl’s Day ladies can be seen with them here and there.

Aside from her healthy lifestyle, great sense of humor, and upbeat tracks, Lee Hyori is also known for her tattoos. On her left wrist, she has a sun, moon, and star. On the same arm, she has “Walk lightly in the spring, mother earth is pregnant” written. Lee is a known to love life and nature, so both tattoos pay homage to these interests.

Lee also has “LOVE” tattooed on the back of her neck. 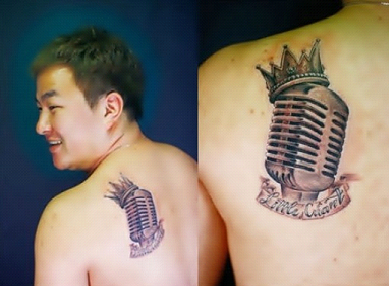 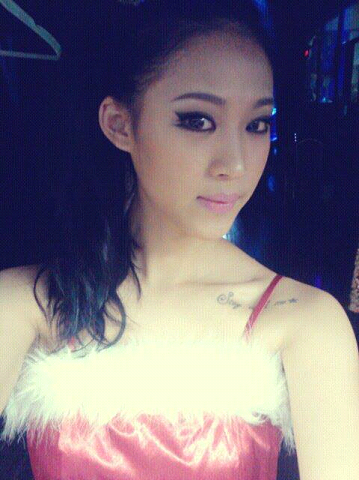 Located on his left shoulder, Huh Gak has a microphone wearing a crown with “Little Giant” beneath it. In February 2013, he explained the meaning behind the tattoo on “Interview Daily” as it has to do with his win on “Super Star K2.”

Huh Gak’s tattoo symbolizes his win on “Super Star K2,” his dream to be a singer, and his first album/via Soompi

“Back then I tried to think about how I keep those feelings,” he said. “I asked people around me how I could preserve what was happening to me, and I decided to get a tattoo. I considered a microphone with a crown on it. There are different types of microphones from karaoke mics to studio mics but I decided on this design.”

The “Little Giant” is a reference to his first album.

Wa$$up’s resident rapper Nada has a tattoo along her left collarbone that appears to say “Stay with me” with a star, but images of the tattoo often have something obstructing it, so complete text is often unseen. The cursive is pretty and ladylike, softening Nada’s often hard-edged appearance. 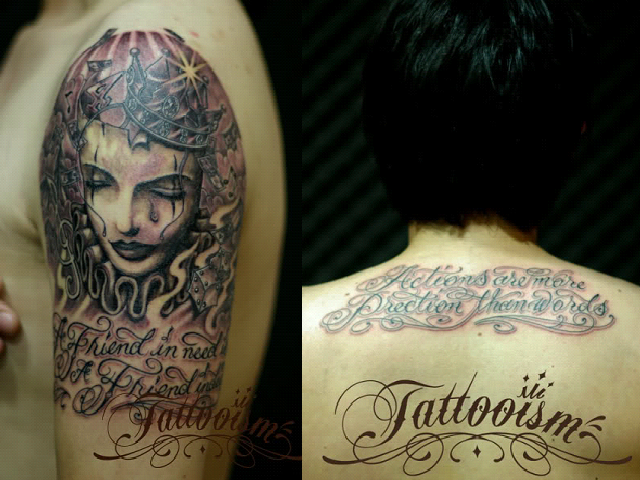 Both Kangin and Shindong got their tattoos in 2008, but one is a little more well-done than the other.

Shindong’s tattoo on his left arm is elaborate, featuring a crying female wearing ruffles and a crown. The shading and effort really catches the eye. The text states “A friend in need is a friend indeed.”

Kangin’s is done in a similar writing style and color scheme as Bang Yongguk’s “Viva la revolucion” and “make art not war” tattoos, so style-wise, it looks cool. The tattoo should say “actions are more precious than words,” but it says “actions are more prection than words.” Sadly, an Engrish moment is permanently etched into his back although it is stylish!

Of course, there are many more idols with tattoos! We’ll be sure to bring you more in the future!