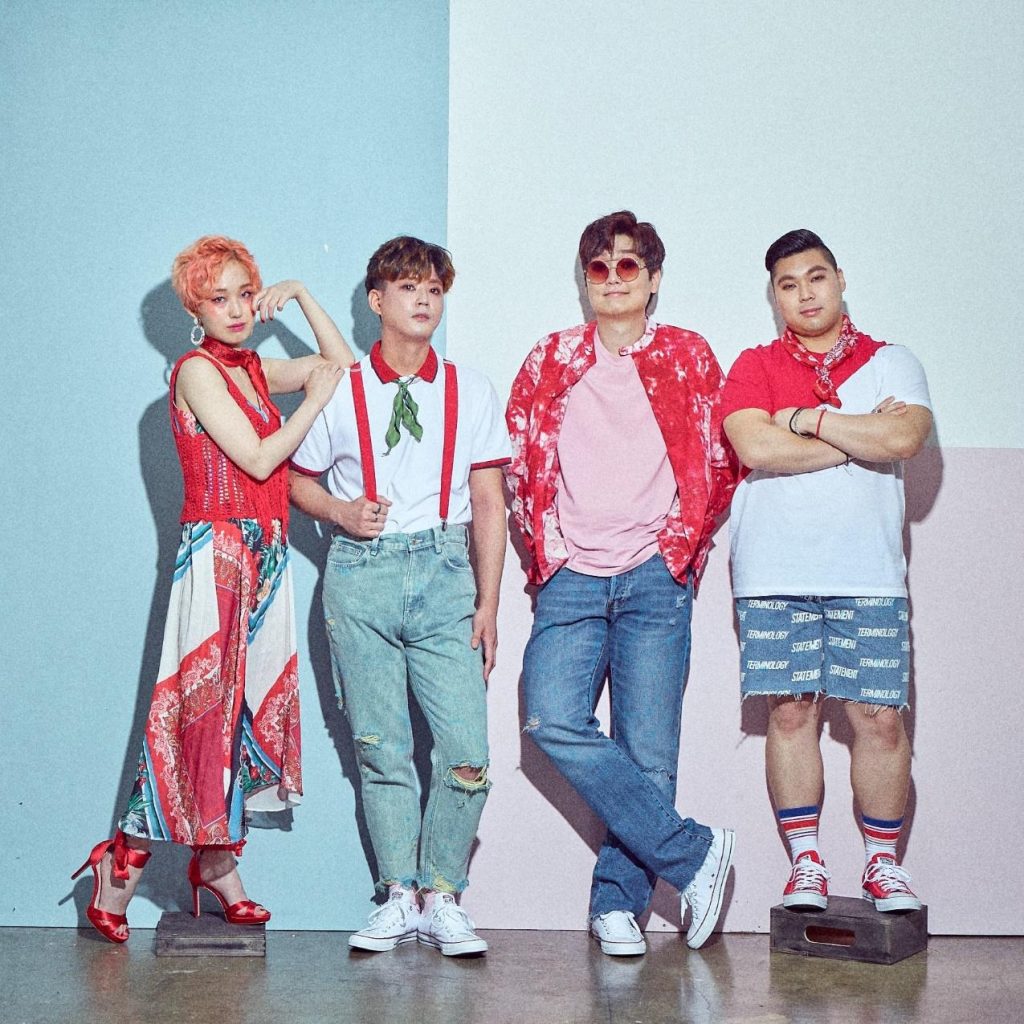 Please briefly introduce yourselves to our readers please.

Hyunduk: Hello, I am Hyunduk and I am the vocalist from TRISS.

Youngkwon: Hello, I am Shin Youngkwon, the drummer of TRISS.

Daisy: I am Daisy and I play the synthesizer.

Minkyu: I am Kim Minkyu and I am the bassist of TRISS.

Please explain about what kind of music TRISS offers.

Hyungduk: TRISS’ music is based on 80’s Synth music. We select a concept when we get inspiration from a scene or a picture. For example, we think of a scene – a 80’s racing animation, a tennis court in front of an apartment complex or something – then we produce a song that could be used showing the scene through sound and synth music.

Youngkwon: We use a digital instrument called a synthesizer to make unique and fun rock music mixed with fresh mood.

Minkyu: We produce a lot of diverse music. Our asset I think would be that four of us all play and perform.

How did you get together as a band?

Hyungduk: We formed as a band in 2017 since we wanted to create a new band that plays synth music. We began with Mingyu who was playing for a different band, then we were introduced to Youngkwon the drummer. Then we were joined by Daisy who was a frequent performer at live clubs last.

How often do you have sessions or practice a day?

Hyungduk: We hold sessions one or two times a week, and we practice as much as we need individually. I take once a week to write songs at the studio.

Youngkwon: We’re all busy so we have group sessions for about 4 hours a day.

Daisy: It depends on the day, but sometimes I practice all day.

Minkyu: I do a lot of work in the studio and practice rooms. Recently, I’ve been writing a lot of ballads and taking the time to work on other projects.

Which musician or artist do you admire the most?

Hyungduk: This is hard because there are so many. I listen to a lot of music by Tame Impala and Foster the People. Since I was young, I was a fan of Foo Fighters, Muse, Radiohead and The Strokes.

Which song or album do you listen to the most these days?

Daisy: I listen to a lot of classical music these days.

Minkyu: The Strokes’ new album came out, so I am listening to that. I used to listen to a lot of rock music but I’ve recently moved onto a lot of Hip Hop and R&B.

What are your current hobbies?

Hyungduk: I usually sit at home with my wife and play Heroes of the storm. Since I like playing console games, I play most of the recent Ps4 games that are available. I also so on walks to the park with my wife and dog. The name of our dog is Jessie.

Youngkwon: I go on walks or watch baseball.

Daisy: I do all sorts of things and listen to a lot of classical music.

Minkyu: I play games or work on new and diverse music with my friends at my home.

Where do you think is the best place to travel in Korea?

Hyungduk: I recommend Sokcho. It’s a small city by the East Sea – the sea is clean and there aren’t that many people around the area compared to where tourists go. There’s a lot of nice stuff to eat at the nearby market and since it’s only 2~3 hours away from Seoul so it’s convenient to visit.

Minkyu: Korea has a lot of great places to visit since it has the oceans on three of its dimensions. On the westside, there is Incheon. On the east – Gangneung, in the southern part – there is Jeju and Busan.

Please tell us about your future goals and plans.

Hyungduk: We want to continue making music for a long time, if possible. To me, making music is a hobby and a challenge that helps to develop myself. I wish our first album being released this year will be something I can be proud of.

Youngkwon: We are currently working on it, and it is our goal to release an album this fall.

Daisy: I want to achieve the basics of a professional musician.

Minkyu: I am always thinking our video contents. I want us to challenge ourselves on a new genre of music.

Hyungduk: Thank you for your continued support. Please show much interest to our upcoming album as well.

Youngkwon: We thank so many people who support us and we’ll repay you with great music.

Daisy: We’re always so grateful. We’re inspired by you every time we feel like giving up.