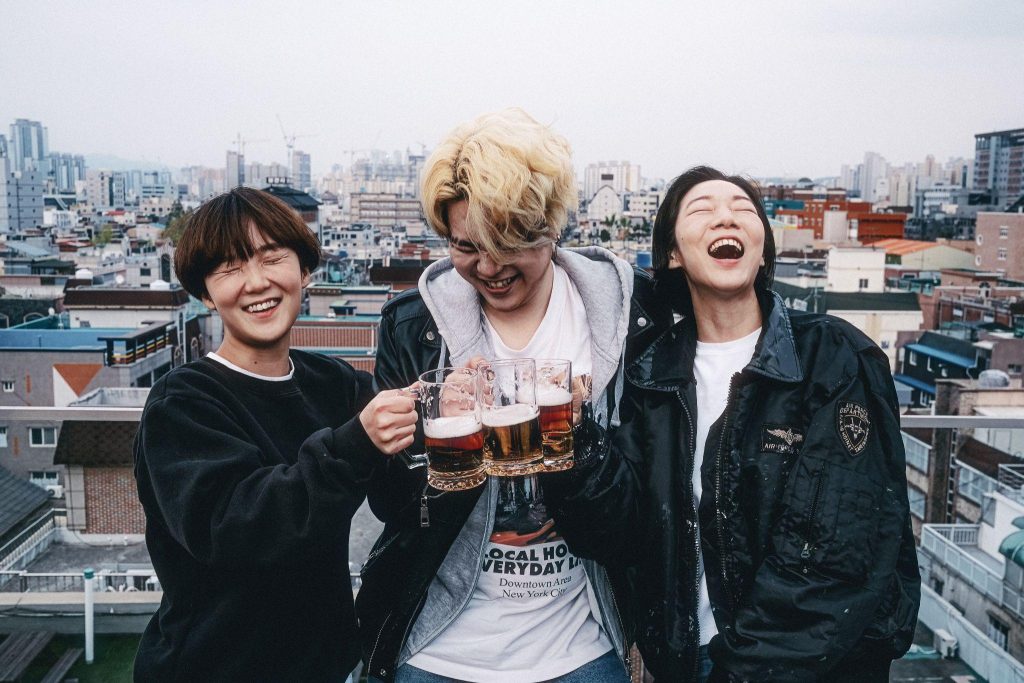 Hello, thank you so much for taking your precious time for this interview. Kindly introduce yourselves to our readers.

Meena: Hello, this is Bae Meena. I’m a vocalist and a bassist.

Myeong-jin: I’m Kim Myeong-jin. I am a drummer and a vocalist.

Jung-hoon: I am Han Jung-hoo. I’m a guitarist and a vocalist.

Tell us how you came up with the name “Drinking Boys and Girls Choir.”

Meena: We came up with the name in hope to always remain as boys and girls who love to drink. We also wanted to put “choir” in because we all sing together as a band.

We are curious on how you guys initially got into music.

Meena: When I was in high school, I got to listen to Marilyn Mason’s music through a friend, and that’s how I got into rock music and made up my mind to join a band when I got into uni.

And after watching Daegu’s well-known indie band A-FRICA perform, I was so impressed by the drummer that I joined the school band a day after enrolling. I was the drummer there for around three to four years. A member of an indie band who was invited to play at a rock festival at my school, asked me to join the band, and that’s how I got into the indie scene in Daegu from 2008.

Myeong-jin: When I was in grade 5 in elementary, I happened to see an idol girl band AIDA on TV, and got really into them.

When I later got into middle school, I naturally began learning how to play the drums and acoustic guitar. Around that time, the priest at the cathedral that I attended had started a band, and being in the band helped me a lot too. In high school, I never played in a band but I got to play different percussion instruments from being in an orchestra.

Jung-hoon: When I was in middle school, I heard Marry Me by Ellegarden play in the car. At the time, I had no dreams for myself, but when I heard the song play, I realized my path was music and being in a band. I began to play the guitar right after that incident and am still doing music till this day.

Pick just one of your songs that you love performing the most and the reason why.

Meena: If I had to choose, it would be I’m A Fucking McDonald’s. It was written based on real experience and it can help to relieve the anger that always exists in my mind.

Myeong-jin: National Police Shit is a really fast song with a section that goes by really quickly, so it’s enjoyable to play the drums to the music.

Jung-hoon: I feel that Red Shift has all the elements of our band. I think it best showcases a “cool” side of us.

Could you take turns to compliment your fellow band members?

Meena: Myeong-jin is not only a great drummer, but she’s really skilled as a songwriter and lyricist. I gain much consolation and even get emotional from listening to songs written by her. My favorite track from our upcoming second album is, “My Second Universe” by Myeong-jin.

Jung-hoon is extremely passionate. He joined the band only recently but I feel that he’s doing his best to fit in with the band’s atmosphere. I hope we can keep spending more time with him as a band.

Myeong-jin : Meena is an emotional and sensitive punk rocker. She really relates to the people who are in need and is doing her part to change the world. Jung-hoon’s best characteristics are the fact that he’s very faithful and zealous. He makes me look back on myself for always being lazy.

Jung-hoon: As the band’s leader, Myeong-jin is always so supportive and her drumming is beyond powerful. I admire how Meena is so incredibly energetic on stage. I’m always learning tons from the two members. 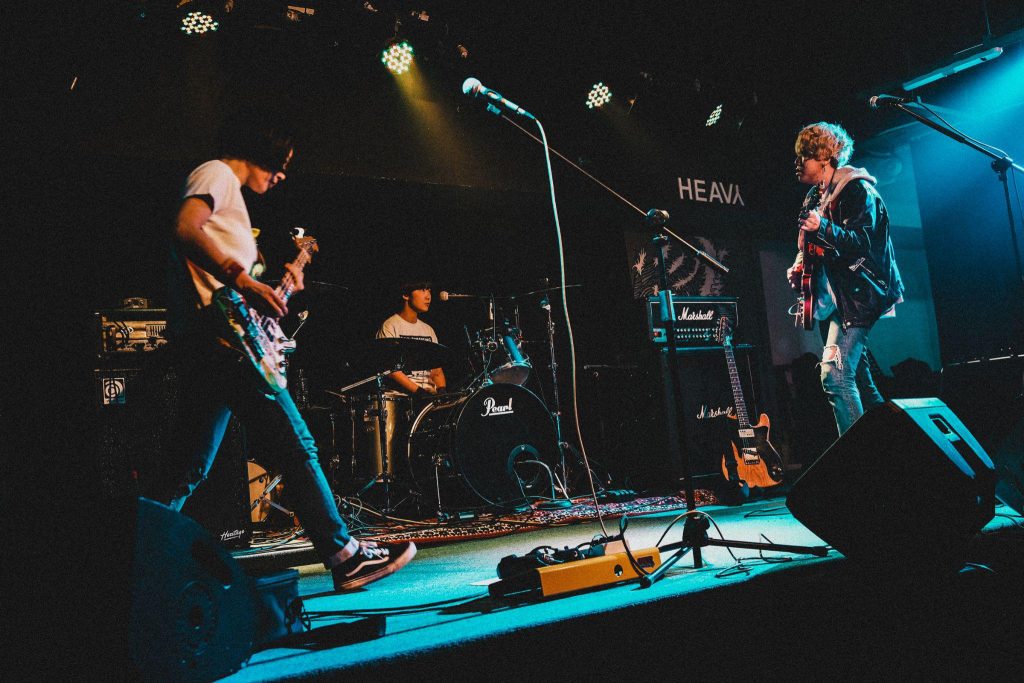 What kind of music are you immersed in nowadays?

Meena: I’m listening to a lot of Billy Carter, Bosudong Cooler, Dead Buttons. I really like the fact that the three bands are all very interested in issues concerning gender, human rights, environmental issues. Billy Carter’s latest album Don’t Push Me literally describes feminism so well, and I cried while listening to it. While working on our album last year, I listened to a lot of music by The Beths.

Myeong-jin : I’ve been listening to a lot of music by TENGGER members Itta and RAAI lately.

Jung-hoon: I usually like to listen to Nothing’s Carved in Stone – a team formed by the guitarist of Ellegarden that helped me choose the path of music. All the members are so talented and never fail to inspire me.

What is the first thing that you do when you get up in the morning?

Meena: I drink water. After staying numb for a while, I get up to brush my teeth. When I have the time, I always try to go for a jog in the morning or hike.

Myeong-jin: I yawn and then drink some water.

Jung-hoon: I think to myself that I want to sleep longer, then I consider sleeping for another 5 minutes or so. Then I spend more time zoned out.

Please name one possession that you cherish the most.

Meena: I can’t say that I cherish this the most but I think I’m the most attached to my phone. When smartphones first came out, I tried not to rely on it too much, but it now feels like it’s become a part of me. What else? Wireless cable..?

Myeong-jin: I try not to give too much attention to things and choose not to be greedy.

Jung-hoon: The songs on my playlist. They’re always with me wherever I go. I have some songs that are hard to find these days, so I consider them as my best friends.

Which country in the world would you most like to perform in and why?

Meena: I’d really love to revisit Indonesia for a tour. I also wish we could perform at the Oktoberfest in Germany. And I would love to visit all the countries that I haven’t been to yet.

Myeong-jin: I would love to perform in Japan, China, and other countries.

Jung-hoon: There are so many countries and cities that we haven’t been able to go so far, but I’ve always wished to perform at the rock festival in Japan.

Can we wrap this interview by stating your plans and hopes for the band’s future, and please add something nice to your fans as well.

Meena: Drinking Boys and Girls Choir’s second album is coming out in July. We hope that our new album will cheer you all up during the pandemic. We look forward to seeing you all soon.

Jung-hoon : Our second album is being released soon. I believe all the tracks on the album are really great. Stay safe and healthy. Please listen to our album and watch this space for our live performances!

3 responses to “Kcrush Interview with Drinking Boys and Girls Choir”