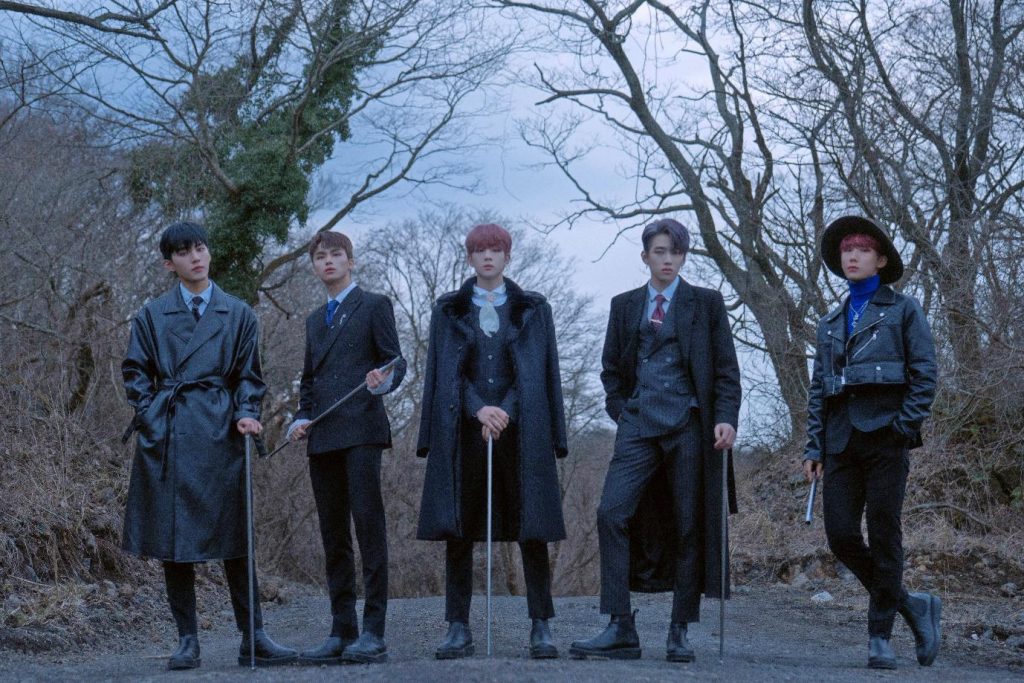 Would you briefly introduce yourselves to our readers?

Jaechan: Hello, I am Jaechan, a legal adult this year at age 20!!

Please enlighten us on what “DONGKIZ” means.

Wondae: DONGKIZ is a group of 5 men who know how to have a great time, in the east. Our chant is “From (Dong) East to the World,” which means we would expand our horizon from the east to the rest of the world. 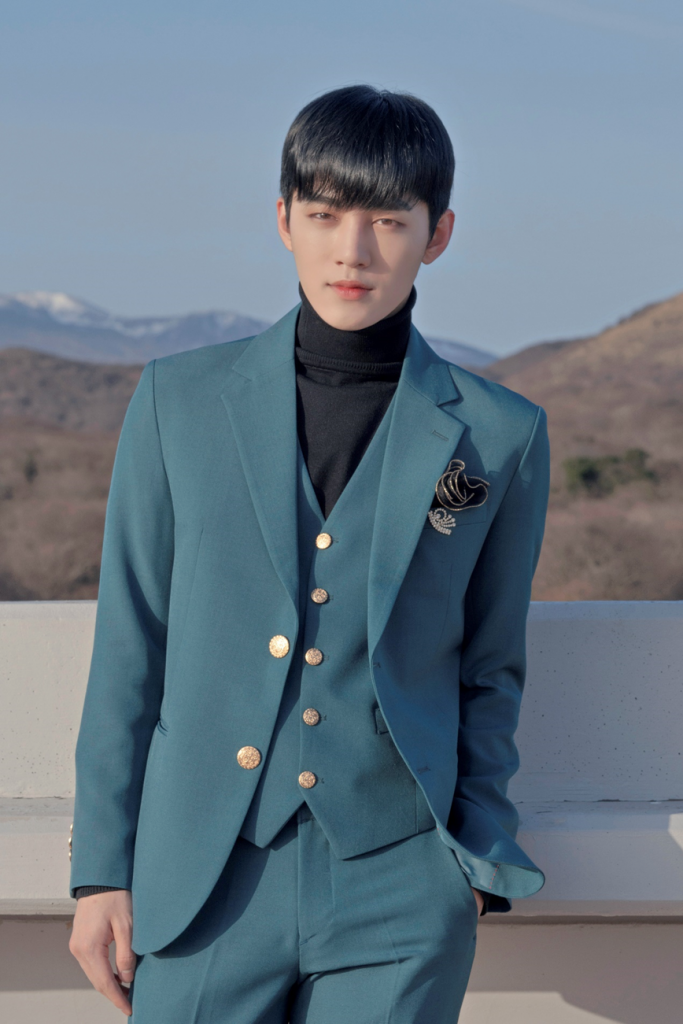 How did you all end up in this band?

Wondae: When I was younger, I used to watch music shows and thought the performers look so cool. Because I wanted to be like them, I started auditioning and failed numerous times to get in. Thankfully, I learned a lot from the experience.

Kyoungyoon: When I was at school, I was inspired and consoled by a particular singer, so I started wanting to be like that in order to inspire and console others.

Munik: I got on stage for the first time after a teacher’s recommendation, and naturally got interested in performing… then it later became a dream.

Jaechan: I starting dreaming about being a singer because I found it amazing to be able to express my inner feelings through songs and other elements.

Jonghyeong: I watched a lot of performances while growing up. I began to follow their dances and singing – later enjoyed being on stage, so I started wanting to become an artist!

Tell us about what you’ve been up to most recently.

Wondae: We recently made a comeback with our latest single LUPIN. It’s an exciting song infused with old school Hip Hop and the choreography during the chorus is impressive. We’re currently doing radio djing, members Munik and Jaechan feature as variety panelists, as well as other various projects. 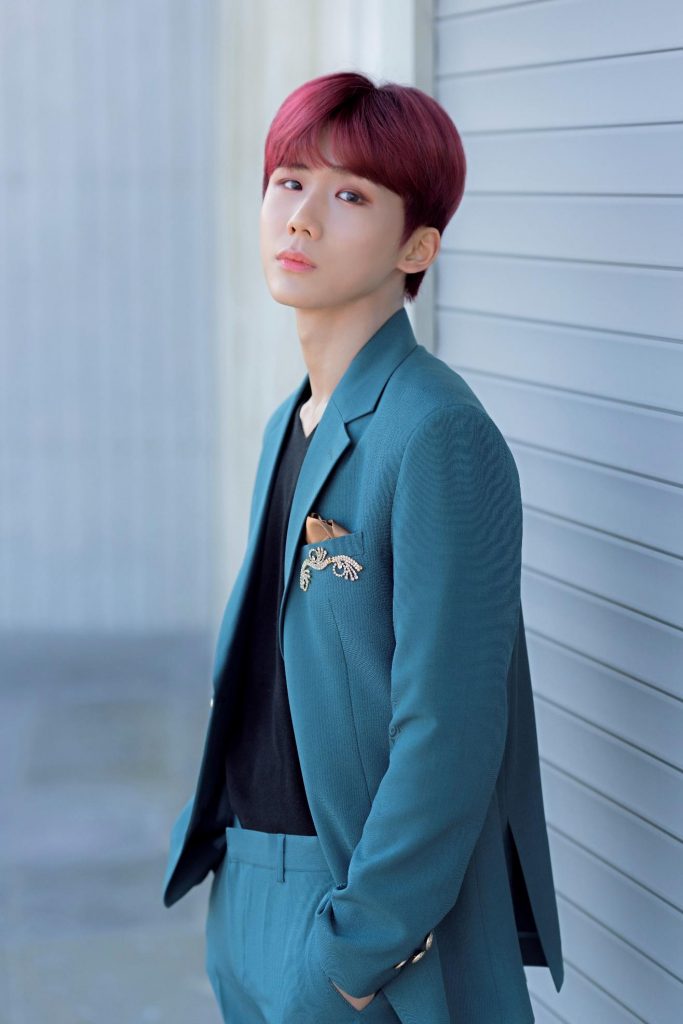 Tell us about your musical preference.

Wondae: I love all songs regardless of the genre. I love pop music, so I wanted to share the music with my voice with all the fans. I’m currently uploading my cover versions of pop music on DONGKIZ official YouTube site. I’ve become interested in Hip Hop recently, so I am doing rap covers and writing lyrics these days.

Munik: I try to expand on what I listen to, but I tend to listen to a lot of dance music, tropical sound, and funky sound that are upbeat.

Jaechan: I listen to Hip Hop, and at times, Lo-fi music.

Jonghyeong: I listen to a variety of different music from Hip Hop, R&B, to dance music that are rhythmical, moody and various upbeat music, because I believe they can somewhat change the listener’s mood.

What song or album are you listening to the most frequently?

Wondae: These days, I am listening to a lot of Ariana Grande and Lizzo’s music. I am a fan of Ariana Grande and even went to her concerts, I especially love her song called Jason’s Song. The piano tune, rhythmical melody, and lyrics like ‘bargain sale’ is addicting and attractive.

Munik: Tones and I – Dance Monkey. I initially started listening because their vocals were unique but I’m currently listening to it frequently because I find the sound attractive. 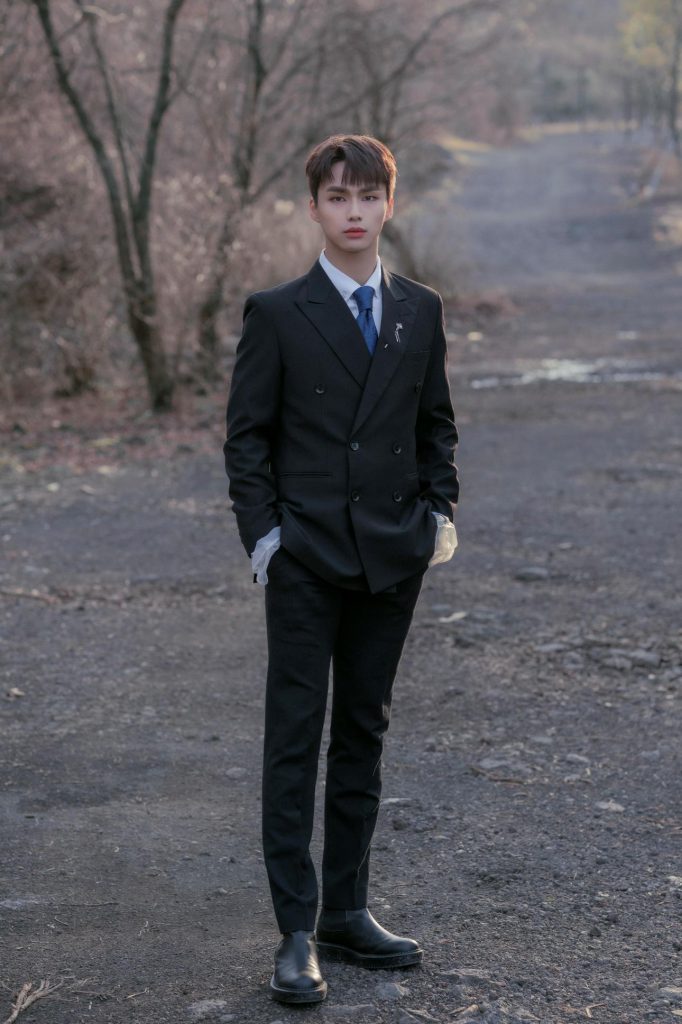 Which singer/artist do you respect the most?

Wondae: Bruno Mars and Beyoncé are role models that I was the most inspired by. The way they conduct themselves on stage and how they evolve endlessly are really what I should be taking after. One time, I watched them perform all day, from early morning until the evening. It felt good when I imagined myself singing on stage like that. If given the chance, I would love to work with them.

Kyoungyoon: Park Hyo-shin sunbaenim. He’s the driving force behind why I dreamt of becoming a singer!

Munik: I love BTS sunbaenims. I love how they all dance differently, yet, as a group, they look so unified. I also really want to emulate the fact they think about their fans so much.

Jaechan: I started music after listening to Justin Bieber’s music.

Jonghyeong: Dean, Penomeco, and HONNE. I respect them because each artist has defined characteristics and I like how they do music according to their own styles.

Which color/shade suits your voice the best?

Wondae: Probably Black & White… I think my voice goes well with jazzy and R&B songs well. When I sing songs by Michael Buble or John Legend, people around have said that my voice matches well with their songs.

Kyoungyoon: Grey. The reason is, it’s not too bright or dark and gives off a feeling of comfort because it’s in-between.

Munik: I would say white for my voice. It goes well with any vocals and I want people to hear clear and comfortable sound of my voice.

Jaechan: Purple. I like its dream-like feeling it gives.

Jonghyeong: Blue? I think it’s a color that gives good feeling. I would like my voice to be memorable and likeable when people hear it. 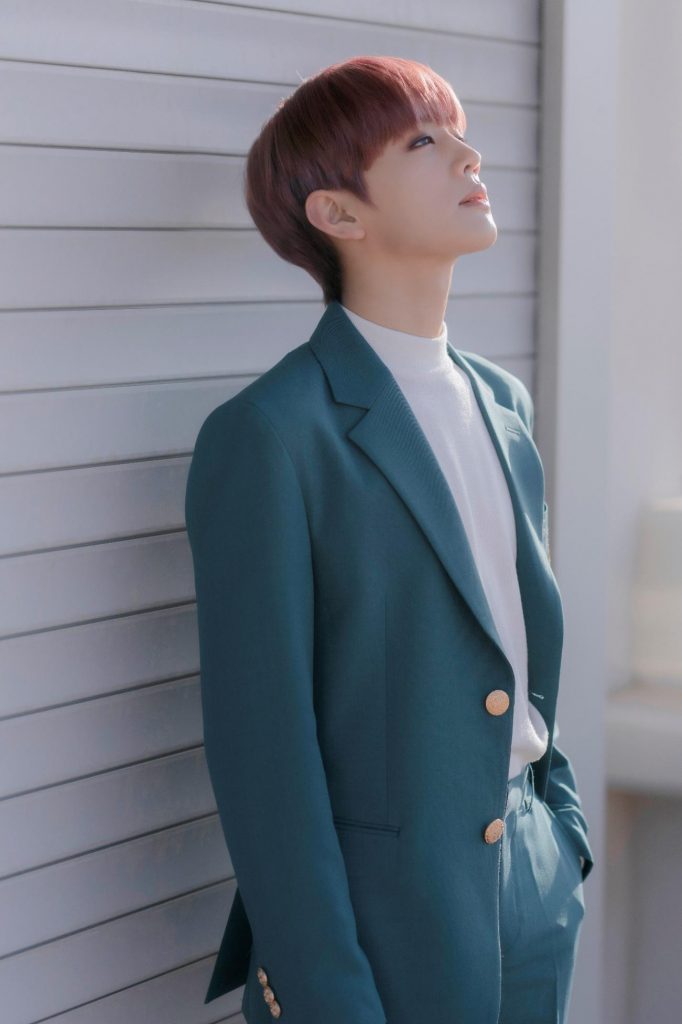 What’s your fav food and beverage?

Wondae: There isn’t any food that I can’t eat or dislike. It’s really a blessing that I can like and eat anything. I am especially in a great mood when I eat meat. Whenever I eat meat and Coke together, it’s like the best day ever for me.

Munik: I eat a lot of noodle-type foods and Sujebi, so I’m into flour-based foods the best. As for beverages, I love sweet drinks or fruit juice.

Jaechan: Milkshakes. I got really into them after tasting a milkshake once.

What are your hobbies or interests?

Wondae: I love searching for great songs. When I am at a café searching for songs, the time flies by so quickly. I hate being in a stuffy place so listening to songs while taking walks freely is a way of releasing stress for me.

Kyoungyoon: Listening to a song that I like, watching movies, working out and writing lyrics.

Munik: I recently starting gaming. I starting playing because it got me away from all the heavy thinking.

Jonghyeong: Taking walks while listening to music, watching dramas or movies, and reading books. I release stress while taking walks because I can somehow feel free from doing it. I also watch dramas or movies because I can then concentrate on that and think less of distracting things. I love getting consolation from reading books and becoming both emotional and rational from doing so. 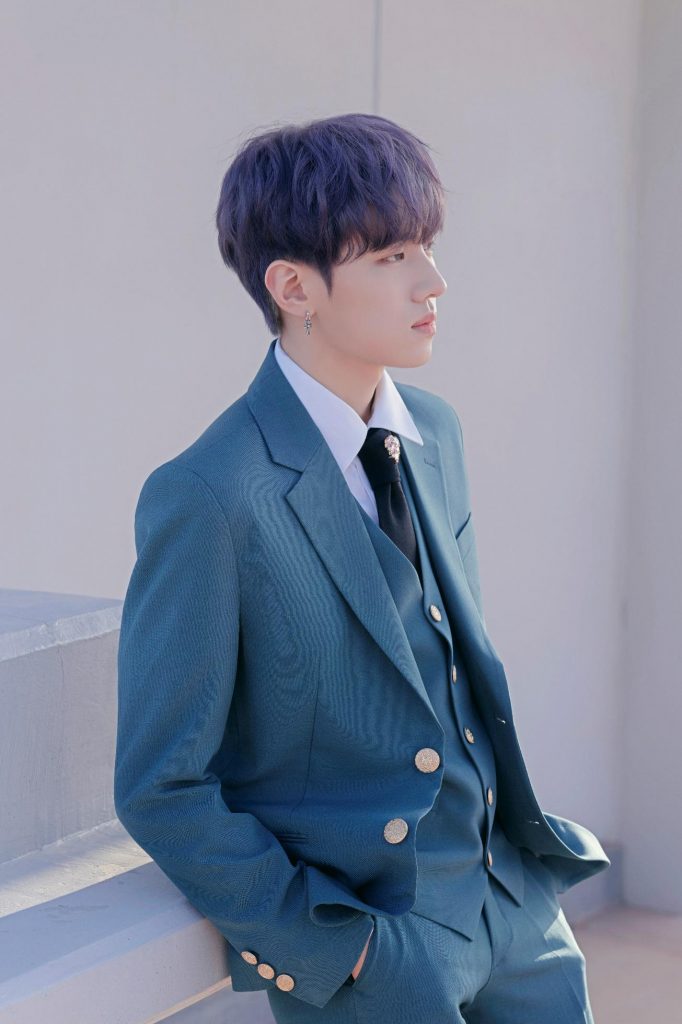 Name any books, movies or dramas that you’ve enjoyed recently.

Wondae: It’s not something that I watched recently, but The Devil Wears Prada is a move that I watch regularly. It might seem like a movie about just fashion but it is about a life struggle of a newbie at work. Due to the competition within the company and amount of work, the main character changes and has less time for her friends. I think the movie deals well with what young people go through in life or will go through in the future.

Munik: I haven’t been able to watch or read anything recently but I would like to watch Parasite the movie because I heard that the acting and black humor leave a great impression.

Jaechan: It wasn’t recent, but I remember enjoying WALL-E!!

Tell us about your future plans and goals.

Wondae: We’re trying to achieve things that we haven’t been able to in the past. Please stay with us since we have much to show you! You’ll be able to see a new side from us!

Kyoungyoon: We’re doing well as a group, but it is our goal to mature into globalized artists. My personal goal is to be recognized through my music and give inspiration to the people as I have been when I was at school.

Munik: I will try to become a multi-talented idol, whom everyone can enjoy watching on stage.

Jaechan: We want to work hard to make it to the Billboard Chart like BTS sunbaenims.

Jonghyeong: As a team and an individual, there is so much we have yet to showcase, and have a lot to develop, so it is my goal to evolve!

Let’s wrap this up by adding nice comments for the fans!

Wondae: Aris! You know we are one, right? Please stay healthy and safe! Love you, all!

Kyoungyoon: There’s so much room for improvement, but I will continue to develop and evolve! Aris, thank you for being there whenever we’re tired out and weary!

Munik: We’re nearly in our first anniversary since debut, we’ll try to always make you smile and be happy when you see us! Stay with us!

Jaechan: Thank you for supporting us and please wear a mask in this coronavirus pandemic! Please support our latest single, LUPIN as well ~~

Jonghyeong: Thank you so much for all the continued love and support. We will try to become singers that can repay your love! Thank you ~❤ 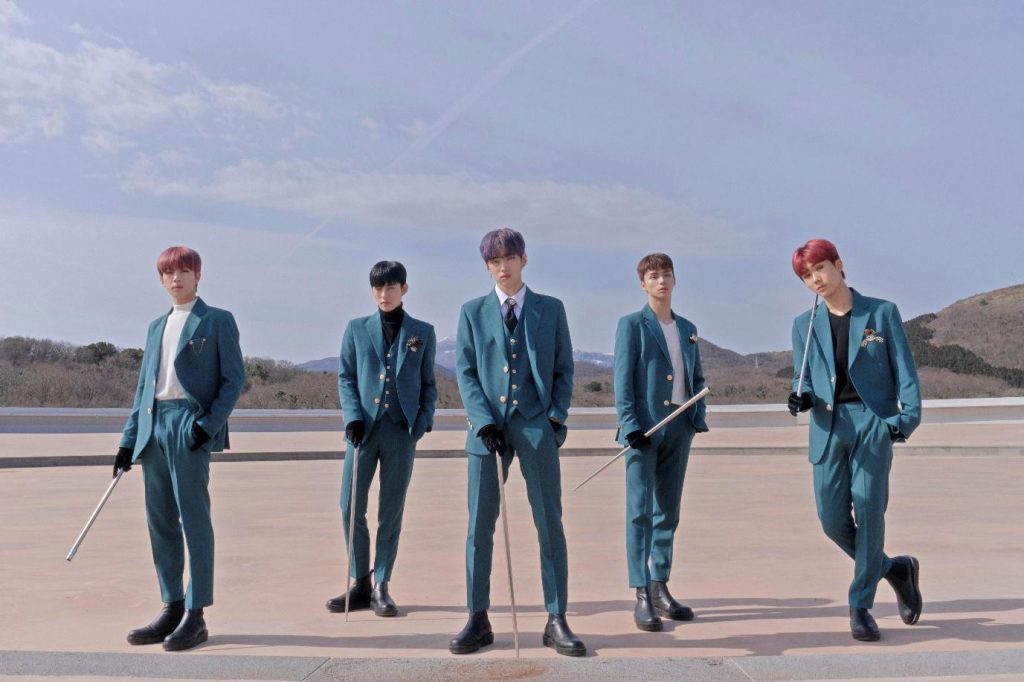