KCON 2015 is quickly approaching and having experienced the beast last year first hand, I can tell you, you WILL need to prepare ahead of time. Here are a few details and tips for those unfamiliar with the convention.

Red Velvet, GOT7, Monsta X and Sistar are only part of the amazing line up this year. For the younger generation attending, Shinhwa’s 1996 debut may have occurred before you were born but that doesn’t mean you should ignore them. They recently had a comeback with “Sniper” and it was a great song. Another older group is Super Junior, and while not all their members will be in attendance, they definitely will put on a great show.

Alongside the performers, you have actors and other guests attending as well! So far Daniel Henney, Ki Hong Lee, Son Ho Jun, and Kim Soo Hyun have been announced. Kim Soo Hyun is known for his role in My Love From The Star and definitely would be a treat to meet, which brings me to my next point.

Arguably one of the best parts of the convention. With each ticket level you have a chance for at least one fan interaction pass. There were three levels last year: audience interaction, hi-touch and signing. All of them are completely random scratch off cards you receive when you check in at the convention.

An audience pass, which all ticket tiers have a chance to have this year, allows you to watch the artists during their interaction, which is pretty exciting. There is also a red carpet version of this where you get to watch the stars walk the red carpet before the concert.

A hi-touch pass allows you to hi-five or shake the hand of the group during the interactions and a signing pass will allow you to get something signed by the artists. All of these are great opportunities to see your favorite groups up close. I was able to watch Teen Top during their interaction, meet BTS and B1A4 and get an item signed by VIXX.

One IMPORTANT fact about how the interaction passes work is that you may get passes for groups attending on different days than the one you are attending. For example, you may only be attending day one of the concert, but you could receive a pass for someone attending day two.

Many people will be willing to trade for certain groups so keep an eye out for that if you do not originally get the group you want to interact with.

I included a few of my own photos from fan interactions for visual reference. 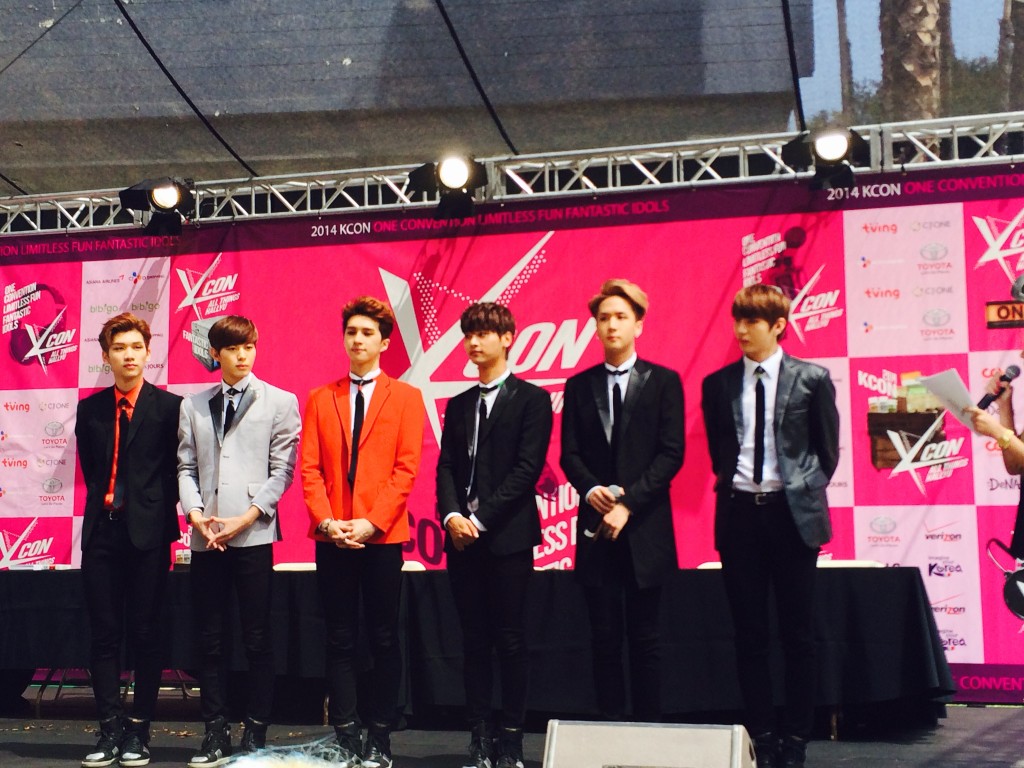 The convention during the day is another fun part of KCON. There were dozens of venders selling all sorts of food and merchandise for really good prices. Bring cash with you beforehand because you’re bound to see something you want and not all venders will take cards.

There will also be workshops that you can attend. There hasn’t been a full program released yet, but the ones last year were very entertaining and filled up the time before the concert. They have invited several YouTubers, cosplayers and writers this year, so who knows what all is in store for KCON attendees.

This year the convention part of the festival is indoors but still be sure to drink plenty of water and eat so you’re able to experience all that KCON has to offer!

This is something many people do not think about because of the excitement for the upcoming event. If you’re in a seat for the concert this year this section may not apply to you (but if you plan on standing, a few things might). Those with GA (General Admission) tickets should remember to dress accordingly for being in a standing crowd. During G-Dragon’s performance last year people got pretty close together in the standing area so it got really hot, really fast. Wear shoes that you will be able to stand for a few hours in to minimize any discomfort.

If the crowd ever gets too rough or scary, make sure you are safe and leave if you need to.

Most importantly, remember to respect yourself and others. Don’t ruin your, and potentially others, KCON experience. Hopefully these tips will help you get the most out of this fun convention!