K-Pop Remakes vs. the Original 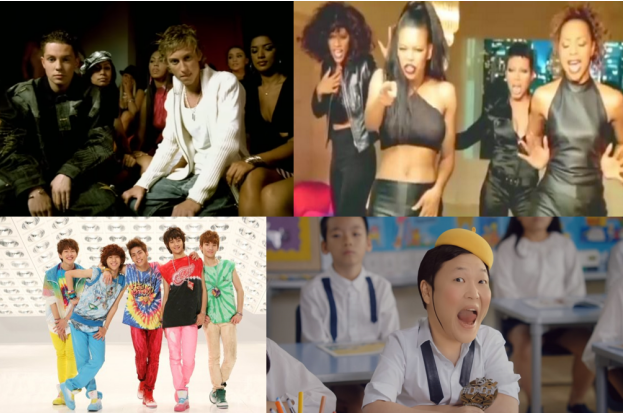 Like any music genre, there are some K-Pop tracks that are not original and are remade. While some songs are from other Korean artists, others may be from international artists. It’s fun to see each artist adds their own unique flavor to old tracks. Here are eleven Western songs and their Korean remakes.* Which do you prefer?

En Vogue sang “Don’t Let Go (Love)” for the Set it Off soundtrack in 1996. The song was En Vogue’s last number one hit and last top ten hit before member changes prevented the group from reaching their former glory. In 2011, Bella released the track as their debut song. Both groups have similar tone and arrangement, so Bella didn’t really make the song their own despite it suiting their voices beautifully. Both groups gave justice to the lyrics without one outdoing the other.

Monrose’s “Hot Summer” was a popular hit in Germany when it was released. The track even had commercial airplay in the US. Monrose’s rendition had more sex appeal that matched the lyrical content. F(x)’s version had a stronger poppy-but-feminine feel. Monrose’s instrumentals feel noisy compared to f(x)’s SM-produced processing that makes it more appealing, but both tracks have unique flavor.

“Whatta Man” is an essential 1990s song that perfectly encapsulates the era. Salt ‘N’ Peppa and En Vogue were among the hottest groups in the US. The track was a chart-topper and an award winner. The song is sexy, edgy, and cool. I.O.I’s version lacks the edginess and has more pop flavor. While it’s a nice rendition, nothing compares to the original.

Featured in the movie From Justin to Kelly, American Idol alums Justin Guarini and Kelly Clarkson released the popular track “Timeless.” The song features beauty and emotion and was popular in Asia at the time of its release. In 2006, Zhang Liyin and Junsu released their own version that had stronger delicacy and sweetness. Their vocals were better suited for the song, especially since Guarini and Clarkson were almost in a shouting match at the end of their version.

In 2002, “This Love” was one of the biggest songs of the year and helped to enhance Maroon 5’s career. Adam Levine’s vocals have the strength and uniqueness to make the song memorable even 15 years after its release. G-Dragon, while being one of South Korea’s most internationally known artists, didn’t quite have the chops to carry the song. His version incorporates rap elements that make the track sound harsh in spots. GD’s pitch doesn’t fit the tone and arrangement, while Maroon 5’s version hits all the right spots.

“I Got It from My Mama” has plenty of sexual tones as it objectifies the female body. PSY’s “I Got It from My Daddy” spins the concept on its head as it parodies will.i.am’s song as PSY flaunts around as an older gentleman in his version’s MV. Unfortunately for will.i.am, his version sounds one-note while PSY’s fun take, lyric shift, and modern twist makes the track more enjoyable to the ear.

While not a direct remake, SM Entertainment bought the rights to Corbin Bleu’s track; Jonhyun and Minho penned the “Juliette” lyrics to the track to make the song their own. The arrangements are exactly the same without much difference between the tone and harmonies. Both songs have their own unique lyrics to make both tracks equally decent.

While J-Line Entertainment never fully admitted Tahiti’s “Love Sick” is actually “Potential Breakup Song,” the similarities are there and quite prominent. Tahiti’s version has tinnier instrumentals that give it more pop nuances, while Aly and AJ’s version has more rock influences. The lyrics to both songs are different with Aly and AJ being angry over being jilted and Tahiti’s version covers a female stringing her partner along. As Tahiti’s third single and track with a different member lineup, the vocals lacked power despite the song being fairly decent. However, Aly and AJ win this round because their version has more power.

In 2001, Jennifer Lopez was one of the “it” artists and “Play” was one of the “it” songs. As a popular track on MTV’s Total Request Live and on several radio stations, it was hard to escape the song and its catchy beat and chorus. Three years later, Baby V.O.X released Korean and English versions of the track as a remix. Unfortunately for Baby V.O.X, their version didn’t reach its potential since it was released following the “Xcstasy” controversy where the group sampled content from Tupac (the rights to the content were unclear at the time). While “Play Remix” fit Baby V.O.X’s image, their version was more repetitive while Jennifer Lopez’s had clear verses and chorus.

English hip-hop group Blazin’ Squad released “Flip Reverse” in 2003 on cassette! The track, which was widely popular in the UK with airplay in the US. Years later, it’s one of the group’s most remembered tracks. H.O.T’s Jang Woo-Hyuk’s version appeared on his No More Drama album as his first solo release. Jang’s version lost a little something without a whole group behind him and with the higher pitch. He does Blazin’ Squad’s track justice, but Blazin’ Squad’s rendition is the stronger of the two.

Puerto Rican singer Luis Fonsi’s “Keep My Cool” appeared on his 2002 Fight the Feeling album. The original’s masculine vocals fit the lyrical content, while BoA’s feminine charms and power enhanced the track nicely. Both tracks kept the Spanish influences to make it recognizable, and there wasn’t a lot of change from the original in BoA’s version. Both tracks are strong and have different tones to make them stand out for both artists.

*Tracks are singles or side tracks released by Korean artists. These tracks are not cover songs.