History of the Alhambra in Spain

Home › Article › History of the Alhambra in Spain

History of the Alhambra in Spain 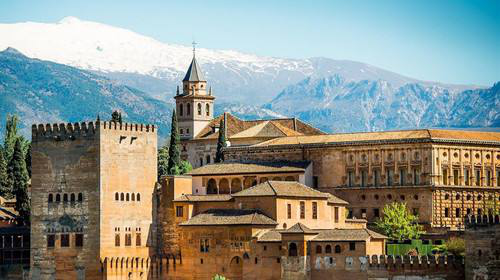 As it has been announced that a new Kdrama with Hyun-Bin and potentially Park Shin Hye, in the lead female role, will begin filming sometime in the second half of 2018 in Granada, Spain, we thought it would be nice to provide a bit of history about the literal title of the drama, “Memories of the Alhambra.” In the northwest direction of Spain’s highest peak, Sierra Nevada, there lies a pearl, the Alhambra Palace. In 899, this World Wonder was first built as a fortress, after being abandoned for hundreds of years, the Moors from North Africa rebuilt it and turned it into a royal palace. Alhambra represents the perfect combination of Arabian architecture and garden art. It is an Islamic footprint in this Catholic country, a mark of the Moors’ history.

Much history about the Moors has been lost and some say purposely destroyed, thus who were the Moors? It is stated that they lived all over the world before/after Christ’s time and descendants still live today, designed great structures and much more. In 1984, the UNESCO listed Alhambra as a World Heritage Site. Many movies, songs and poems were born from there.

Behind the filigree walls, the history of Alhambra started in the late 8th century, when the Moors came into power in the Iberian Peninsula, and most specifically in Granada. Although the fortress they built wasn’t in use for long, it became the foundation of the future palace. From 1002 to 1031, due to the infighting of Caliphate of Córdoba, the state fell into a number of small Muslim kingdoms. The Emirate of Granada was one of them. The Nasrid Dynasty took over this little kingdom in 1236, and two years later, the Alhambra project was on. 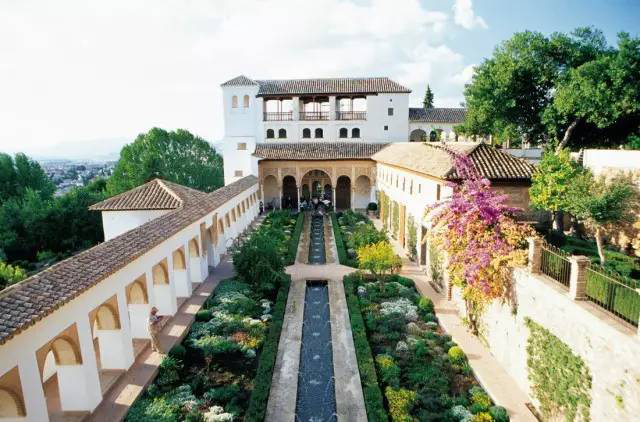 (Court of the Myrtles)

Among all the palaces, gardens and bathhouses, there are two main areas that stand out: Court of the Myrtles and Court of the Lions. In 1333, Yusuf I, Sultan of Granada built Court of the Myrtles and its surrounding palaces, opening a new chapter to Alhambra as a royal palace. However, Yusuf I was murdered at the age of 36. His 16-year-old son, Muhammed V, became the new Sultan in 1353. During his 39 years in charge, there were 3 years he was forced into exile. He learned different architecture styles from different places and built Court of the Lions upon return. Generalife, the summer palace of Sultan, was later connected to Alhambra, providing it with flowing water. Until this point, Alhambra has been successfully transformed from a fortress into a living complex. 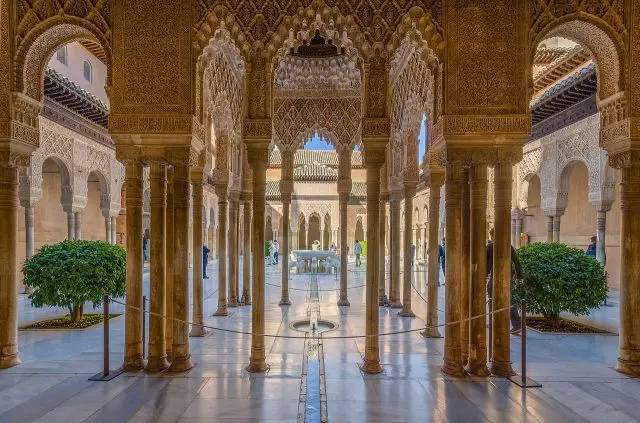 (Court of the Lions)

Unlike many other historical sites, Alhambra was not a product of a kingdom’s prosperity, but a witness of the endless Islamic royal murder, the decline of a dynasty, and the end of a history. It is said that 36 most brave warriors were killed here because the king doubted about their loyalty. In 1492, the last Sultan of Granada surrendered to the Catholic kingdom, putting an end to the ruling of Muslim in Spain.

The most fortunate thing is that the new king did not destroy this art treasure. Instead, it became the Royal Court of Ferdinand and Isabella. It was from here that Christopher Columbus received financial support for his expedition; it was this expedition that revealed the Age of Discovery and made Spain the first world colonial empire. In the hands of Catholicism, Alhambra has seen some partial changes and new Renaissance buildings around it, such as the Palace of Charles V. However, no matter how different it may look from the past to today, the history it has seen, the stories it could tell, would be ever-lasting.

The plot of “Memories of the Alhambra” sounds like fun, so we say much success to the cast and crew and we are looking forward to watching!