GOT7 – Hot and Dedicated to Success

Home › Article › GOT7 – Hot and Dedicated to Success

GOT7 – Hot and Dedicated to Success 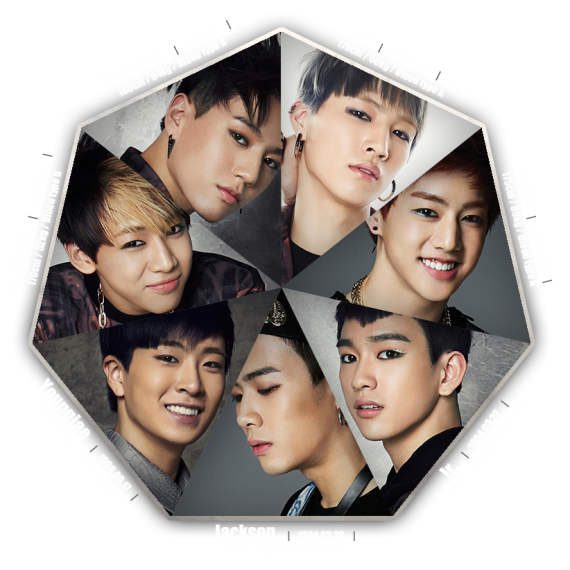 GOT7 – Hot and Dedicated to Success  –  J Chung

Got7 is a seven member boyband who made their debut officially on Mnet’s M! Countdown on 16th of January this year.  Got7’s members are named JB (the leader, who appeared in Dream High 2) Mark, Jackson, Jr, Youngjae, BamBam and Yugeom. Unlike most other typical Korean boybands, three members of the band consist of guys who are not originally Korean.  Mark is a twenty year old Taiwanese American from Los Angeles.   Jackson is also, twenty years old from Hong Kong.  BamBam is from Thailand, and he is 17.  The rest of the members JB, Youngjae, Jr, Yugeom are born and raised in Korea.

On 10th January 2014, JYP released Got7’s debut teaser video on YouTube.  On January 15, 2014, Got7 released the music video for their debut song “Girls Girls Girls” from their first album Got it?

The album was released on the 20th, featuring six tracks including their first single “Girls Girls Girls”,  which later reached number 1 on many sites.  And, songs like “Hello,” “Playground,” “I Like You,” and “Follow Me”, also did well.  The album reached to the top on the Billboard World Album Charts and number 2 on Gaon Album Charts.  Got7, also has their own reality web show running called the Real GOT7 .

Their first single “Girls Girls Girls” was written and produced by Jin-Young Park, a.k.a JYP, the CEO who signed them.  One of the Got7 members, Jr- has the same name as JYP, thus the management decided on renaming him Junior to avoid any confusion.

GOT7, also signed a contract with Sony Music in Japan, then on 4th of April they held a showcase called “GOT7 Showcase 1st Impact in Japan” in Ryougoku Sumo Hall, Tokyo in the presence of a crowd of 10,000.

A unique point about the group is that Got7’s dance performances display moves derived from martial arts combined with b-boying and since the boys are highly proficient in b-boying and martial art tricking, it makes it all the more interesting to watch them perform.

Got7 has their official fan club called ‘I Got7’, which the boys indicate, because number 7 is considered lucky, they want the fans to say they are lucky to have all the members in the group.

Their next album will be out in late June of this year.  We managed to get their interview, and it seems that they worked extremely hard to bring this to fruition.  We wish the guys would enjoy themselves in bringing new kinds of music to the Kpop industry.  And, that they would have a massive success and stay 7.

Hello Got7 members!  Was becoming a singer your childhood dream, or did you have other careers in mind?

Jackson:  I used to be a fencer, getting the gold medal was my dream. I became interested in hop hip while being a fencer, so I was also interested in becoming a singer.

Bambam:  Yes, I wanted be a singer since I was young.

Mark:  I had no idea I would become a singer.  After getting cast and going through various trainees’ show cases, I really wanted to become one.

Yugeom:  My dream was to become a singer since childhood.

Youngjae:  I enjoyed cooking and art at first, but as I stared singing, I built my dreams to become a singer.

Jr:  I wanted to be a singer since I was young.

JB:  No, my initial dream was to be a B-boy. But, now my dream is to become a singer who makes good music.

Who do you most respect in the world.

Jackson:  I respect my parents. They were both athletes.  Their sincerity, and their mind to do their best is very outstanding.  I thank my parents for giving birth to me.

JB:  My family, because I learn a lot from my parents.

Are there any places in the world you want to travel in the future?

Jackson:  I’ve traveled a lot when I was an athlete.  Right now, I’d like to visit Thailand where BamBam lives.

BamBam:  Want to travel to Dubai.

Jr:  France, the U,K, the U.S.A.  There are so many other countries besides that  I’d want to visit.

Jackson:  I like black. Most of my outfits are black.

Mark:  Red.
Yugyeom:  I like all the pastel toned colors.

What kind of food do you like to have usually?

Jackson:  I like pizza and pasta. I also like Chinese and Korean food.  I am not picky with food, but I can’t eat spicy stuff that well.

JB:  Korean food, I like types of stews and rice.

Do you have any bad habits?

Jackson:  I don’t have any bad habits in particular. I use my computer with the light switched off, but I want to fix that habit, ‘cause it’s bad for my eyesight.

BamBam:  I keep rotating my neck, because I have pain at the back of my neck.

Mark:  I don’t have any bad habits.

Yugeom:  I don’t have any habits.

Youngjae:  Biting my lips. I wanna fix from getting annoyed easily.

Jr:  I have a lot of sleep in the morning.

JB:  I tend to have the habit of sticking my chin out a lot.

Do you have any complaints about the other members, or any requests you would like to tell them?

Jackson:  There isn’t any.

BamBam:  Our members talk to each other often, so there isn’t anything to complain about.

Mark:  There isn’t anything to complain about.

Jr:  I don’t have any complaints.

JB:  There isn’t anything so far, our members get along so well.

Are there any bands you consider a rival to Got7?

Jackson:  15&, who is also a new band in our company.  I wish we’d both try very hard, and later get recognition as artists.

BamBam:  I think the fundamental thing is to win against yourself.

Youngjae:  There isn’t anyone we consider as rivals.

JB:  Because, we are still new comers, the best thing for us right now is to just try our best.

What kind of person is your ideal girl?

Jackson:  A woman who is healthy.  And, someone suited to me.

Jr:  Someone who goes well with me, who loves to do her own work, would be my ideal.

Jaebum:  Someone who catches my eye.

Has anything changed for you after your debut?

Jackson:  I began to see more of what I lack and thought I should put more effort into work.

BamBam:  People recognize me when I’m out and about.

Mark:  When I’m walking in the streets, sometimes I get recognized by people.

Yugeom:  I feel that I have to get down to more practice!

Youngjae:  On anything I do, I act out more carefully.

Jr:  There’s more stuff to prepare for in the morning than before.

JB:  I began to think we need more practice.  And, that our skills still need more work.
We will try our best.

Do you have any wishes for the future?

Jackson:  I wish Got7 will be able to show a more elaborate performance with better music.

BamBam:  I really want us to get the new artist award. We’ll put in a lot of effort.

Yugeom:  I wish I could become a singer like Chris Brown and be recognised in every field.  And, also, I want our team members to be together forever.

Youngjae:  I want to become really good at singing.

Jr:  I want Got7, myself and everyone around me to become successful and live happily.

JB:  I want to understand music more and be extremely good at it.  And, learn to love it more.

What kind of songs or genres are you into?  Do you have any artists you like?

BamBam:  My role model is G-Dragon.

Could you state the school subjects you were confident in or really poor at?

Jackson:  I was confident in economics, but I wasn’t so in science.

Yugeom:  I was very good at Korean language, but I was the least confident in math.

Jr:  I was the most confident in math and not as much in social science.

JB:  I was the good at math and science, but I was not so strong in other subjects that require memorization.

Which performance do you remember the most?

Jackson:  The first performance Got7 had I remember the best.

BamBam:  I remember the performance we had on M Countdown in Yokohama, Japan, because it was the first time we were performing in front of a crowd that massive since our debut.

Mark:  I remember our debut performance the most.

Yugeom:  The first performance we had as our debut.

Youngjae:  The first showcase we had in Korea.

JB:  The first performance we had was the most memorable.

What is the one thing you can be the best at?

Jackson:  I never give up on anything I am doing. I’ll try my best until the end.

Yugeom:  I can do the best free style dance.

JB:  I am good at making an effort continuously.

What is the most important to you?

Jackson:  My family and Got7 are the most important to me.

BamBam:  My family and Got7.

Yugeom:  Our team, family and everyone whom I consider precious to me. And the fans.

Could you say a few words to the fans in America?

Jackson:  I’m going to work hard and never give up!!

Mark:  I hope that we can see you guys soon…

Yugeom:  Really wanna meet you.  Want to come see you with a great performance in the future.  Please hold on.  I LOVE YOU!

Youngjae:  We’ll come back with a great song soon.  We wish you’ll stay around.

JB:  We will strive to become artists who work hard.  We ask for a lot of interest and love from you guys. ^^

Listen to this interview or article on your Alexa device or app: https://amzn.to/34t7TUt