Flavorless Flavors of Youth Flatter Than a Crepe 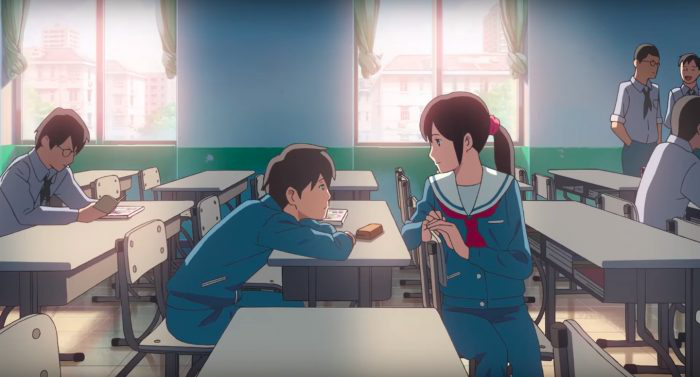 Pretty animation cannot save everything… just ask the anthology film Flavors of Youth.

The 74-minute anime film comprised of three stories is the product of a collaboration of Japanese studio CoMix Wave Films (the home of the smash-hit, Your Name) and Chinese studio Haoliners. The stories—“The Rice Noodles,” “A Little Fashion Show,” and “Love in Shanghai”—follow different characters as they navigate simple, life-changing moments in their lives. Each character lives in a different part of China, but all of them are together in the end getting ready to board a plane to find new adventures after their pivotal moments are revealed to the viewers.

Given how tortuously dull this production is, hopefully the characters are boarding a plane to nowhere so viewers are no longer bothered by their lame tales that lack the appropriate ingredients to help them rise properly.

With a title like Flavors of Youth, one could assume that each story would focus on food. This would have made for a more interesting anthology as food often ties to people’s memories. However, only the “The Rice Noodles” directly relates to food while the other two stories cover two different experiences outside of comforting meals.

Each story lacks cohesion and clarity. With these glaringly obvious flaws, there’s no chance to get attached to the characters or the uninteresting stories they share. Each story is essentially rushed because they are all 25-minutes long. Additionally, character development severely lacks. 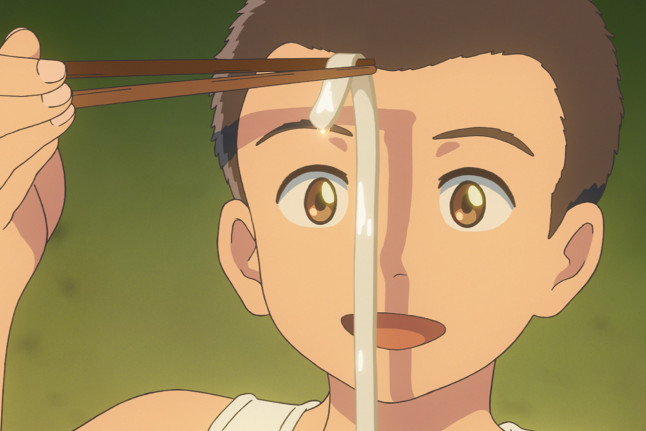 “The Rice Noodles,” which is directed by Yi Xiaoxing in his animation debut, focuses on a Beijing-based young man named Xiao Ming as he tells a story about growing up in the countryside with his grandma. We don’t know much about Xiao Ming other than he loves spending time with his grandma, enjoys rushing over to a specific noodle shop nearby just to stare at his crush, and that he really, really loves bee hoon noodles. These small details are overshadowed by the sub-storyline about the noodle shop and how it changed over time before completely going away and how he found a new noodle restaurant to spend his days. The viewer is left wondering why this one-note, cardboard-character-of-a-man ranked a story, especially since there’s nothing to him other than he really likes noodles. A lot of people like noodles, but that doesn’t mean they deserve an animated short. This story was all flour and no yolk. 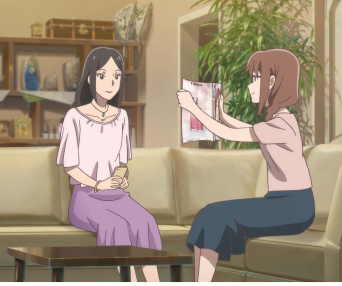 “A Little Fashion Show,” directed by Yoshitaka Takeuchi, is the most interesting story out of the three tales, and that’s not saying a lot because there’s interesting and then there’s “interesting…” This short focuses on two sisters, Yi Lin and Lulu, who are both in the fashion industry in some way. Yi Lin is an aging model who struggles to come to terms with her fading beauty in the face of younger models getting more attention. Yi Lin’s assumed love interest even leaves her for a younger, perkier model, and Yi Lin’s cold personality and propensity for lateness works against her as her career trends downward. Following a rehab stint for an eating disorder, Yi Lin becomes the head model for Lulu’s fashion line.

This story has some character develop, but it’s still a flat story. The viewer does get some insight behind Yi Lin’s motives and why she pursues modeling, and it’s clear why Lulu chooses to make clothes for her sister to model. The bond between sisters is always a good story, but for this short, the two sisters didn’t feel closely related, so the bond needed showcased more. However, “A Little Fashion Show” is the strongest of the three tales.

Finally, the anthology closes with “Love in Shanghai,” directed by Li Haoling. “Love in Shanghai” takes place in a shikumen neighborhood. The story focuses on Limo and his love interest, Xiao Yu. The two talk to each other through a series of recorded “notes” as they prepare for their high school exams. Limo tries his best to rise to Xiao Yu’s level so they can get into the same prestigious high school, but Xiao Yu, although she is abused by her father, fails the exam in hopes to stay with Limo. However, Limo is unaware of this as he failed to listen to the final tape Xiao Yu sent him, leading to them both to be separated until their adulthood.

“Love in Shanghai” could have been a better story, but it failed to live up to its potential due to poorly constructed time shifts and jilted storytelling. The story was difficult to piece together at times due to hasty delivery, thus ruining the effects of a bittersweet story of budding romance, love lost, and love rekindled.

As a whole, the issue was that each director tried cramming full-length stories into three 25-minute segments. Clearly, this is a recipe for disaster because the ingredients for each didn’t combine. The audience should be able to connect to the characters, and they should be allowed to get invested in the stories, but the times left the content raw and undercooked.

The English dubbing is also pitiful. With a voice cast featuring Evan Rachel Wood (True Blood, Westworld), Ross Butler (13 Reasons Why, Riverdale), Crispin Freeman (Fate/Zero, Fate/stay night), and Erica Mendez (Aggretsuko, Sailor Moon Crystal), the dubbing should have been stronger. However, the English voices made the anime even harder to watch. However, the Chinese dubbing was well-done and felt authentic, so Chinese is recommended for this film.

Flavors of Youth also relies heavily on the “from the studio that brought you Your Name” too much. Your Name was a mega-hit globally, so relying on this film to market a sub-par, boring, basically whiny anthology of spoiled, self-centered individuals is a cheap-shot. It’s like telling the audience a cheap hot dog is a prime rib roast: It just doesn’t work.

Flavors of Youth is pretty, but it’s not even close to being a good movie. It’s not even close to being a decent short series. This anthology is a poorly executed mish-mosh of slapped together material, almost like the writers used the spaghetti-method: Throw it at a wall to see what sticks. If you like boring stories, check it out. Otherwise, Flavors of Youth is a skippable film that earns a 1/5, and even that’s a generous helping.

Flavors of Youth is available on Netflix.